For our Valentine’s Day special, The Tab set up two Edinburgh students with two gorgeous ECFS models on a blind date.

It’s that dreaded time of year where all singletons are faced with sickening couples and heart-shaped everything. So The Tab have decided to play cupid and set two of the ECFS fashion show models up with two Edinburgh students on a blind date. 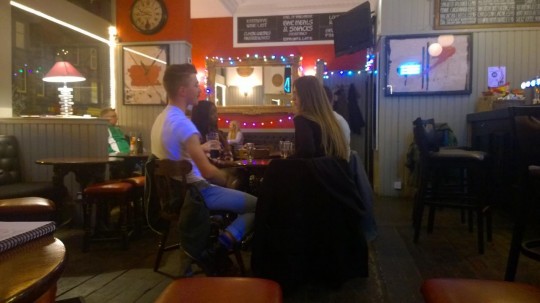 The two models, the lovely Yasmin and the gorgeous Tom, were sent on a blind date with second year Geography student Jack and law student, Adriana. The two couples cosy up with us in The Earl of Marchmont to discuss blind dates, Edinburgh hot spots and hand-cuffing to the bed in bad date anecdotes!!

The Blind Dates: Jack and Adriana

Adriana: I loved it. It was very nice.

Adriana: Pretty chilled, nice to have a conversation. Pretty nice.

The Tab: What did you talk about?

Jack: Well that wasn’t the first thing. Where we went to school where we’re from. She’s from Dundee, flatmates, flats, being hungover in lectures. (looks at Adriana) Tag you go!!

Adriana: Haha okay we talked about our course, his family which was pretty intimidating to be honest.

The Tab: Oh already thinking about in-laws are we?

Jack: That would be terrifying.

The Tab: You wouldn’t fancy the Stepford Wife kind of lifestyle?

Adriana: I can’t cook. I’m learning, I made lasagne once.  I’d be a terrible housewife.

Jack: That’s such an old fashion idea. I’m on a date and I ask “What are your cooking skills?”

Adriana: Luckily we didn’t talk about this otherwise I’d still be here listing all the things I’ve burnt. 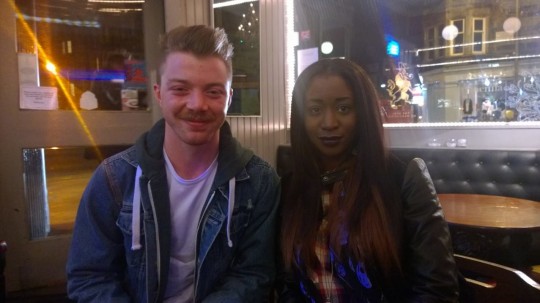 Describe the date in 3 words

Jack: Oh noo, give me time.  No that’s more than 3….Not so scary. The word date is a fucking scary word man. Er, free drinks?

Adriana: Hahaha I like it. Erm.. Nice and Flow.

Can you imagine in 15 years time telling your children that you met on a Tab blind date?

Adriana: I would just tell my children he was a model. Hands up. Hahaha.

The Tab: Would you invite us to your wedding?

Adriana: Well yeah, you can be maid of honour.

The Tab: How would you feel about telling your children Jack?

Jack: It would be an interesting story. Um I don’t know.

The Tab: Too early to mention marriage?

Adriana: (interrupts) Question: if I mention The Tab can I also mention that I roofied his drink that night to seduce him?

What was your favourite part of the date?

Jack: There were so many different parts.

Adriana: I think it was the whole thing in general.

Jack: Conversation was very nice. Our eloping for a cigarette was just I feel racey and romance at the proportions of Dr. Zhivago or something.

Adriana: For me it would be the fact that I had to focus but I was really interested in it so like he’s an interesting guy and HE LOOKS GOOD. I was so interested in what he had to say like usually I kind of blackout during conversations, kind of like struggle.

What was the worst part?

Adriana: (boldly) There were none.

What is your go to conversation topic if it’s awkward and you want to get out?

Adriana: Oh I forgot to flush the toilet! So by the time I come back he is gone.

The Tab: That would be your get out?

Jack: *Looks at phone* Oh that’s the doctors I should get this” and then leave. I always just end up telling awkward stories about my past and then they get scared.

Adriana: Or best one yet, “I feel like I’m in love with you already, do you feel it too?”

Jack: Anything that involves mentioning previous dates or previous people is a no no. It’s happened…

Adriana: Yeah for me it’s him talking about his ex-girlfriend and how he still loved her but it just didn’t work out.

Jack: I once saw a date, your typical date. They were having dinner next to us, she talked about her dog for 30 minutes and left some like cold sore treatment on the table after she left.

The Tab: Oh no that’s terrible!!

Any date spots in Edinburgh you are a fan of?

Jack: I’d say a walk up Blackford Hill is a winner.

Adriana: I would end up sweating and heavily breathing and saying “You know what you go ahead.”

The Tab:“I’ll see you at the pub when you’re done?”

Jack: It’s a fine walk. The views are very nice, arthur’s seat looks like a chicken bone. Trust me. 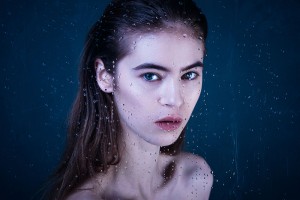 So, how was the date?

Tom: I thought that it was lovely, Adriana was beautiful, majestic, I had a wonderful time. She’s alluring, I would definitely go on a second date.

The Tab: Stop, you’ve just answered all of my questions!!

Yasmin: I really liked it, I was so nervous, I’ve never been on a blind date before but it was really good. It’s normally me who sets people up, now I’m getting a taste of my own medicine.

If you could sum up your date in three words, what would it be?

Tom: Can you sum up any date in three words?

The Tab: Go on, three adjectives to describe Adriana.

Yasmin: I will use interesting, fun, and relaxed. 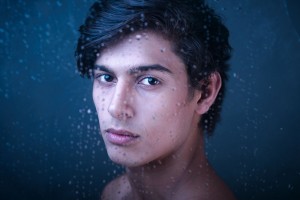 Is date number two on the horizon?

Tom: If I were single, I’d love a date number two.

Yasmin: If you were single, you would mingle. There’s always date number two…

Yasmin: Because we’ve never had date number one!! (laughing).

In fifteen years time can you see yourself telling your children that their parents met on a Tab Valentine’s blind date?

Tom: I don’t think that you can tell from one date, I don’t think. I’d love to, to say, that, potentially? It would be a lovely thing to say, er, yeah.

The Tab: What were you talking about? You two were deep in conversation.

The Tab: Fantastic, she can give you discount on your first divorce.

Tom: What did you talk about?

Yasmin: Not as deep as that!! Just stuff, it just flowed. (Sarcastically) It’s very personal between us, way too much. Generic introduction stuff.

Tom: Drinks, probably would do that on a second date.

Yasmin: (interrupts)… to get her drunk?

Tom: (whispers) You could see it that way. No, no, I would take her to Panda and Sons, a new bar which opened in late November on Queen Street. I’d probably go there. Dinner? Anywhere from The Dome, to Steak to The Outsider.

(Yasmin and Tom sing “Just the Two of Us”)

The Tab: Hey, what about Adriana and Jack?

Yasmin: Who? Only joking!!

Tom: Have you ever been to Wings? This new restaurant and basically, all they do is chicken wings, and it’s very fun, very slapstick humour, very sociable.

The Tab: Good idea but chicken wings is not good date food!!

Yasmin: I think that’s good, break down the barriers.

Tom: How else are you meant to get your first kiss without BBQ sauce on your face?!

Have you ever been on any bad dates?

Tom: Through a mutual friend of ours. She was on a date with another friend who both went back to his and apparently when they were both quite drunk, he handcuffed her to the bed.

Yasmin: (jokingly) OMG that was me!!

The Tab: That was definitely you.

Tom: Yeah, I had a lovely date once, it was going so well and we went around Covent Garden, had a lovely time. So, we went to this last bar and there was chemistry between us and out of nowhere she turns around and said “at my party, if you down a bottle of vodka, you can sleep with me”. Out of nowhere, so I said…

Tom: Okay, and when it came to the actual party… She rejected me!!

How could you reject someone as charming as Tom?! Well there you go folks, even beautiful people have dating problems so don’t worry about having a singleton Valentine’s Day. There will always be plenty of fish in the sea!