Durham SU threatened student confessions page Durfess with a legal letter this week, after accusing them of defamation.

The alleged defamation was within a Durfess post about current SU President, Kate McIntosh. The post, which has since been deleted, was met with uproar from the SU, who sent a legal letter to Durfess asking them to take it down.

The letter reads: "I am writing to request you take down the above post, for a number of reasons, the clearest is defamation."

The legal letter goes on to define defamation ("its publication has caused or is likely to cause serious harm to the reputation of the claimant") and explain examples of what defamation is. They have highlighted an example which defines defamation as claiming an individual "is incompetent in his job, trade or profession."

They go on to state that despite the post being a confession, "If a libel claim were to be raised it would be raised against the owners of Durfess." 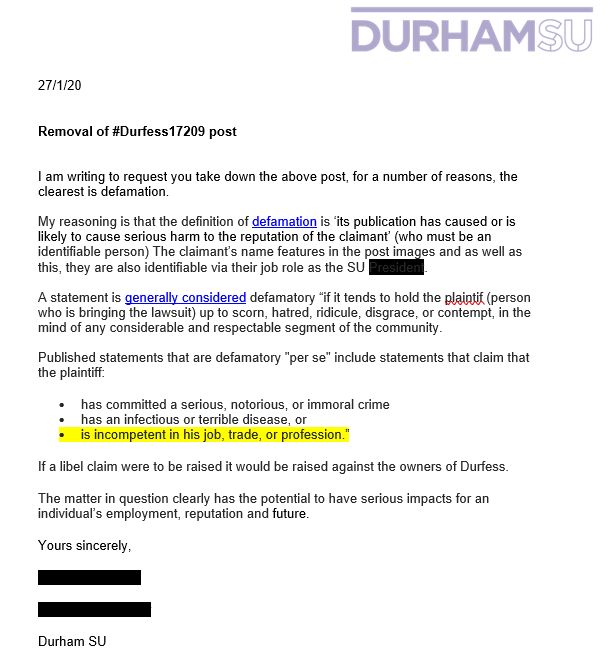 All we can say is yikes

The post has been deleted, as well as Durfess' post of the legal letter. Durfess also changed their profile picture to their logo with the word "Censored" superimposed on top of it, but have since changed it back.

The original profile picture change came with the caption: "We expect an apology for the spurious claims of libel made by the SU against Durfess. Until such apology is made, in protest to their attempts to shut down transparency of process in the interest of Durham students we will hide the Durfess logo behind a CENSORED bar." The profile picture was changed back three hours later. It is unknown whether Durfess received their desired apology. 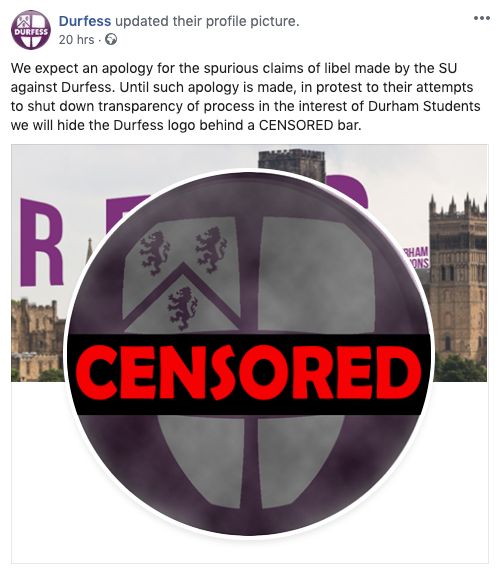 In response to the controversy, President Kate McIntosh issued a statement entitled "Durham's problem with respect" in which she detailed the institutional sexism faced as President of Durham SU, by her and female predecessors before her.

Part of this included stories from ex-SU female Presidents showing the sexism they experienced, such as being made to sit by the door in University meetings so that "when (not if) senior academics attacked her personally, she could leave the room to cry without disturbing people or drawing attention to herself."

She also claims that senior staff disrespected a female predecessor by trying to "police what she ate, what she wore and the language she used."

Responding to the Durfess lawsuit claims, Durham SU confirmed they did send the letter, and said: "Durham Students’ Union is a student rights organisation. We believe that the rights of all of our members are important – that they should have the power to claim and defend them, and that they shouldn’t be targeted for doing so. Everyone has the right not to be defamed. The right not to have damaging claims about them which are not evidenced, or which are so general they cannot be proven or disproven, published or made in a public forum.

"People naturally take to social media to air their opinions. But being on social media doesn’t absolve those posting from their responsibility to treat people with respect and not to seek to mislead. Nor does it mean the subject of the opinion doesn’t have any rights regarding claims about them.

"Durham Students’ Union is also a democratic organisation, owned by students. Let’s be clear – we welcome criticism. It’s part of being a Union, and it makes us better. There have been many criticisms of Student Officers and Durham Students’ Union on social media, and there will continue to be in the future. The vast majority of criticisms make evidenced, specific claims that disagree with an Officer’s actions, ideas or opinions. This kind of criticism is one of the most valuable ways you can contribute to your students’ union."

We're not sure which side is more embarrassing to be on right now.

Want to break stories like this? Join us – no experience needed! Dm us @thetab_durham on Insta or The Tab Durham on Facebook.