Cambridge students are familiar with the sight of cattle on the grass outside King’s College. The grazing cows have been a defining feature of the Cambridge landscape for centuries, and they remain so today. Last night, three of these animals managed to escape their lawn, somehow ending up in Old Schools.

Onlookers report seeing the livestock fleeing through an unmanned gate and making their way along King’s Parade towards Senate House last night. The cows then prised open the door to Old Schools, the University’s administrative centre, proceeding to occupy two floors of the building overnight. They have been there for at least 13 hours, it is believed.

The cows maintained a 2 metre distance from one another on their approach.

The cows have allegedly set up a communal grazing station in the entrance to Old Schools, and a sign has even been hung from the window facing King’s Parade. This reads: “Solidarity Cowledge”. It is unclear what their demands are at this time.

A King’s Porter told the Cambridge Tab: “We spent £550.44 on those cows. That’s money we’re never getting back.”

Stephen Toope, the University Vice-Chancellor, reportedly called the move “certainly unprecedented”, and he has said that the University will do everything in its power to remove the livestock. 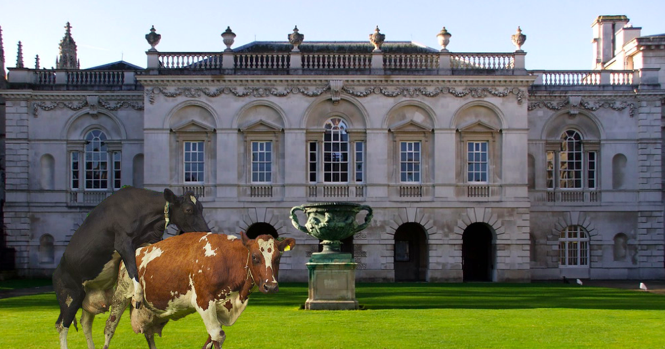