Varsity Trip 2018 in review: Finding the balance between getting on the piste and getting pissed

Over 3,000 Oxbridge students have recently returned from a rollercoaster of a week in Val Thorens. As a Fresher, Varsity was advertised as one of the "musts" of the Cambridge experience. Though the trip was indeed enjoyable to some extent, there needs to be a bit more transparency so that future students can make a more informed decision as to whether they want to spend, quite frankly, a sizeable sum of money at the end of Michaelmas Term on an event that is NOT for everyone by any means. Weighing up the pros and cons, the hope is that if you're reading this before Varsity Trip 2019 it might help you decide for yourself.

Let's start with the pros because, all in all, there are absolutely no regrets having gone on the trip. What's up for debate is if going again is on the cards. With that in mind, I'd like to sincerely thank all those that made Varsity possible, and that the following is not a personal attack but simply an objective review of what went well, and what could have gone better.

1) Val Thorens as the choice of resort 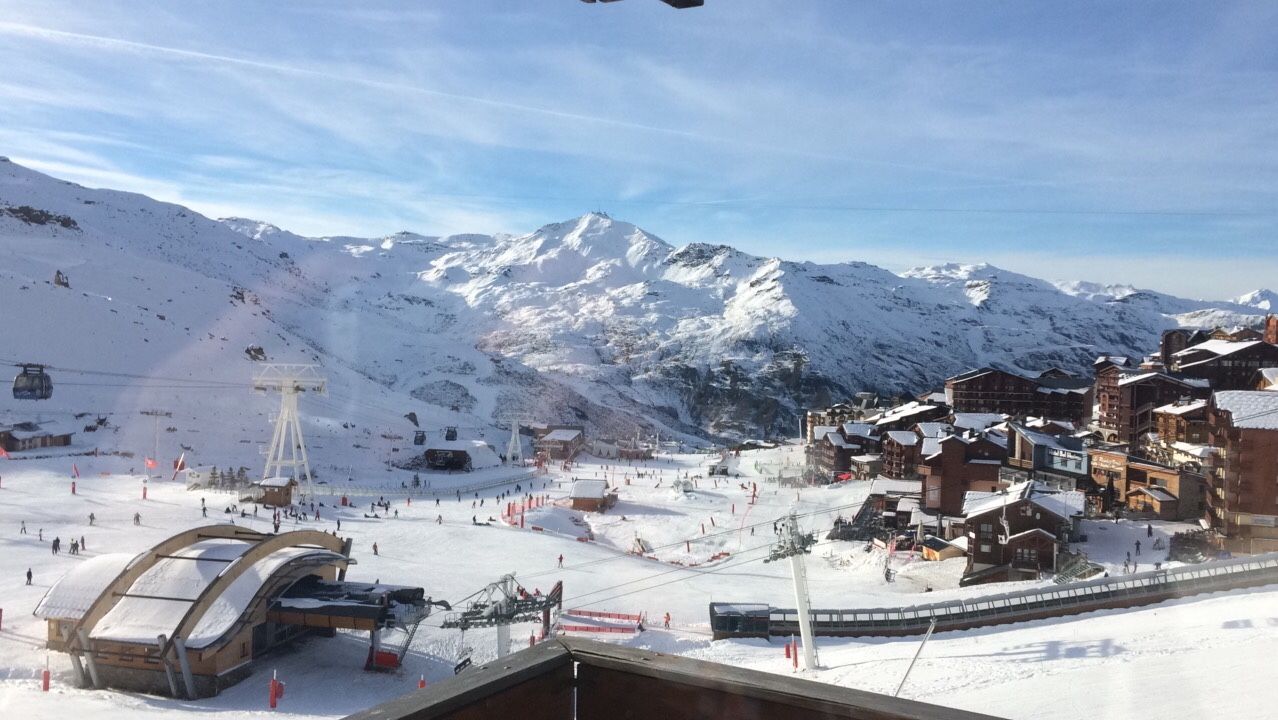 Slightly better than my view out onto Whewell's Court

Val Thorens is quite simply beautiful. All the clubs, cafes, restaurants, supermarkets and ski shops were all in close proximity to each other. The views were stunning, at least if the weather was nice. There was the opportunity for some really good skiing both for the novice and for the experienced skier/boarder. Most of the locals are really friendly, and will try to speak in English where they can (as an MMLer though I encourage you to return the favour where you can!)

From the Standard accommodation up to the mysterious heights of Tier 3, I heard very few if any complaints about the accommodation. Even some of the cheapest accommodation was at a ski in–ski out hotel, which meant very little trekking about in uncomfortable boots carrying awkward skis up a hill. The rooms were comfy and for a week's skiing for a student on a budget, they did the job just fine. If you like a little more luxury however, rumour has it some of the top accommodation had saunas and spas attached. It all comes with a price attached though, which we'll come onto soon enough.

3) If you're a complete beginner

If you've never had the chance to ski, but you've always wanted to give it a try, Varsity is arguably a great opportunity to do so. You'll be skiing with newly made friends from uni with great instructors and the lessons take up a small proportion of the day, so you won't miss out on seeing other friends who have skied before. You never know, they might give you a free hour's session if you ask nicely! "Pizza, Chips, and TURN OMG TURN!" 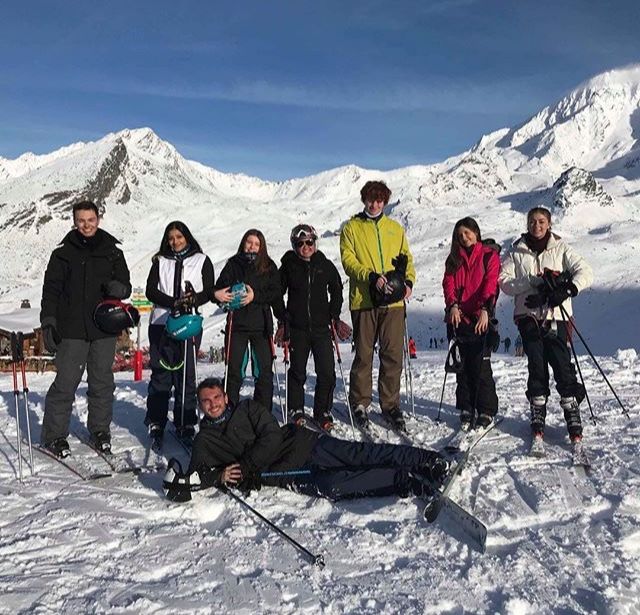 Novices no more! Catch us at the next Winter Olympics on the slalom

4) The travel company organises (most) of the trip for you

NUCO, the travel company, organised everything from travel to lift passes to kit rental. Everything is done for you and requires little effort on your part except for filling in some simple forms and getting your height and weight measured. There was even an official app that had almost all the necessary information, tickets and even an online team ready to answer any questions you might have had. Varsity in some ways is a very hassle free holiday.

5) SOME of the events, après skiing and club nights 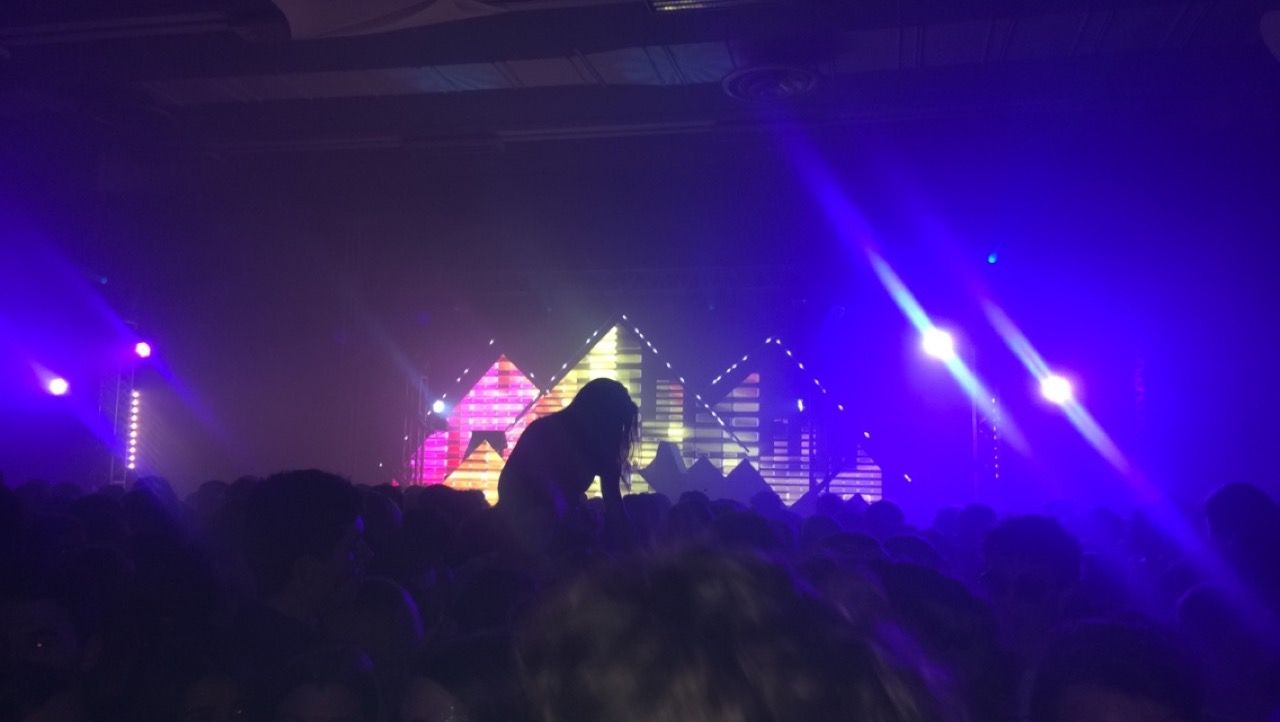 Throughout the week, there were events both on and off piste. Some, like the Cupper's Slalom Event, Closing Night Party, Blue's Bop, and Haute Mess were reported to be a stellar success. The best part about Varsity is that there is much more to do than just skiing, which makes the trip all the more fun and all the more inclusive, especially for new skiers. Wednesday Cindies, you've got competition.

Regardless of whether you think Varsity is expensive or not, it is still a lot of money to invest, money that not every student has. The base fee might seem relatively inexpensive for what you are promised, but that's really not where the cost ends. Accommodation. Money. Ski rental. More money. Pointless branded stash. Money. Food. More and More money. Alcohol. Damn well extortionate. The picture's even worse for beginners. Lessons, kit rental, you name it! What seems like an already expensive £400 can quickly turn into a trip mounting to well over £1000. 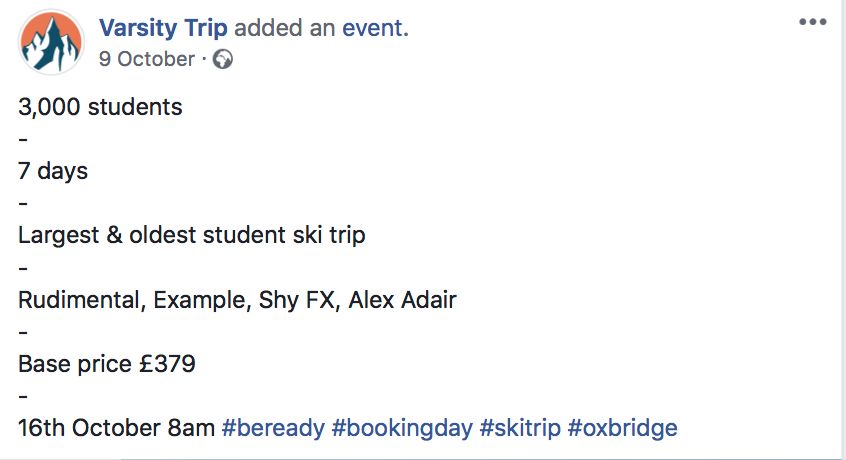 Oh and another £139 for lessons (though it is discounted) 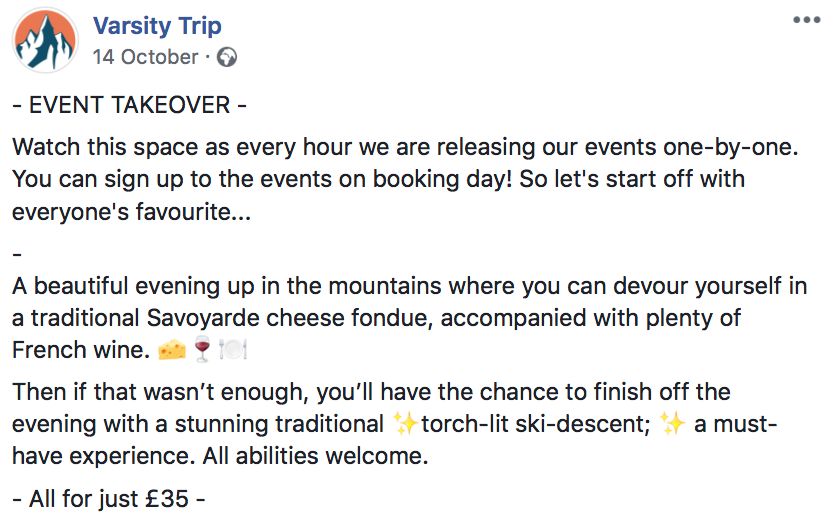 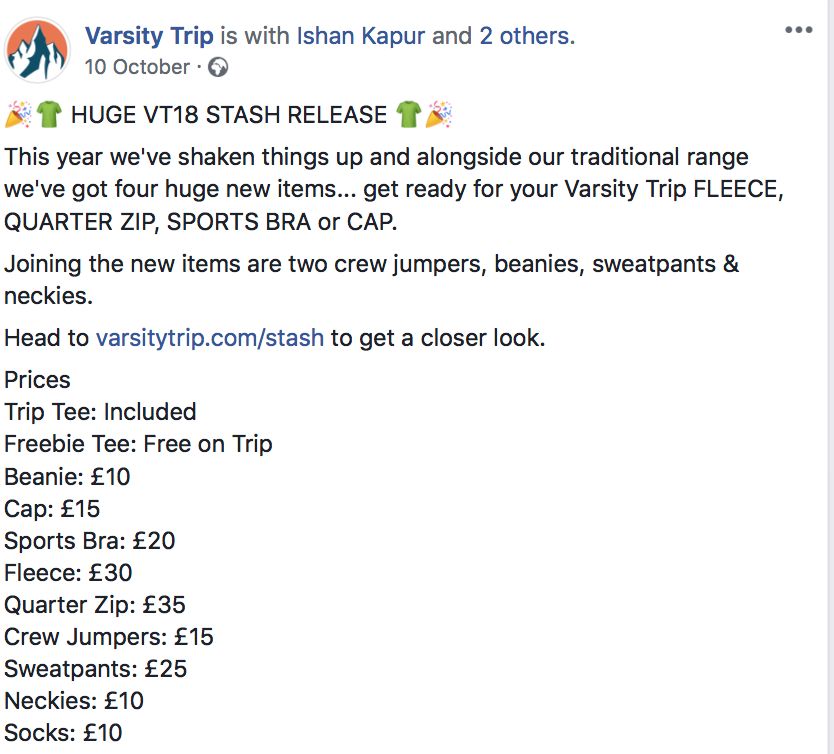 Oh and some optional extras!

Ah, the irony. Yes NUCO, who has been praised above, has found itself in the cons. Why, you ask? Organising the travel of over 3,000 students is tough. Things go wrong. But sometimes those things are avoidable, and whilst no company is perfect, that doesn't mean it's exempt from criticism. Many of the reps were uni students or recent graduates. Though many were helpful, smiley and fun, it was clear that some were just there for the cheap skiing and nothing much more. Professionalism is important, and sometimes it felt like that was slightly lacking. Shout out to the reps that were doing their jobs, your efforts didn't go unnoticed!

3) Some of the OTHER disastrous events

Opening Night was interesting to say the least. People being lifted in tears over the barriers, mosh pits getting out of control, drinks flying into the air, getting shoved out of the way by some down right high and entitled "lads" who couldn't stretch to a simple tap on the shoulder and an "Excuse me". All of this whilst security stood by watching as though nothing had happened. When the safety risk was raised, the response was hardly helpful. There's fun, and then there's dangerous. The line between the two appeared to be a bit blurred. Though other events weren't quite so extreme, a fair few were just extremely dull. 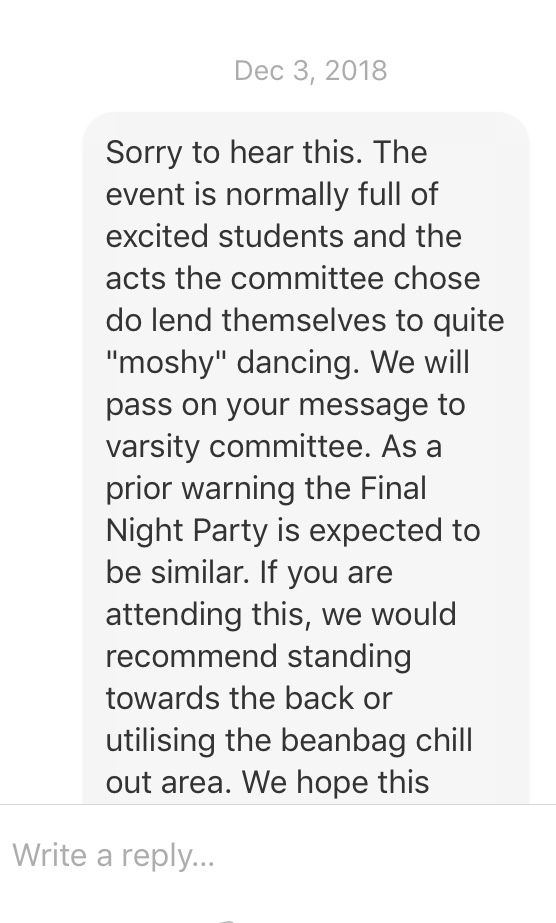 This response lends itself to being quite "polite yet irritating" tbh

4) If you're not a beginner

Obviously, this highly depends on what you want to get out of the Varsity Trip. If you are an able skier, and you want to do some decent skiing, you may be disappointed with what's on offer. Varsity takes place early in the ski season, which sometimes means the weather nor lifts favour lots of varied skiing. Only 1 or 2 black runs were officially open the entire week, with few reds either. That meant crowded blue and green slopes with not great snow. Hardly ideal. 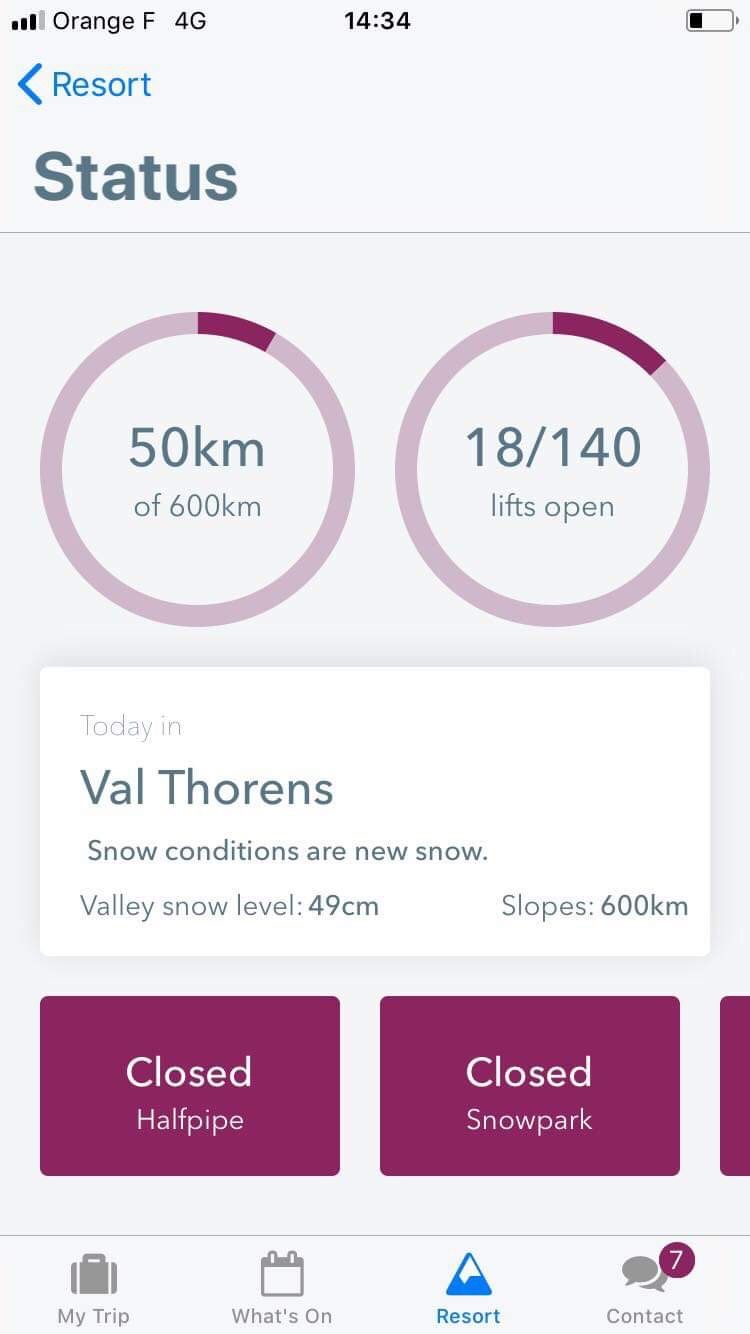 Though more lifts DID open later in the week, it was not that many in the scheme of things

Varsity was for the most part, a great experience. It was a relaxed environment in which you could enjoy the company of your friends in a beautiful resort that has lots to offer. But, was it really worth all that money? Personally, I don't think so. I worked a full time job for over a month to earn enough money to even properly consider going. Perhaps my expectations were too high. In any case, I'm undecided as to whether I will go again. Though my experience isn't representative of that of over 3,000 people, I've tried to be objectively critical, praise the trip where it is deserved, and point out the flaws where it’s equally deserved.

So, is Varsity worth it? I'd give it a solid 3/5. There were highs and there were lows, of which I haven't included the entirety. It really depends a lot on what you personally want to get out of the trip, and how much you are willing to pay to do so. An expensive piss up on the mountains could very easily be replaced for a lot less money elsewhere for a much more enjoyable experience, but at the end of the day that is for you and you alone to decide.

The choice is yours. Bonne chance!