How is Cambridge University linked to Cambridge Analytica and the Facebook Data Scandal?

In light of Zuckerberg’s accusations against the University – what is going on?

All you need to know about the data scandal with Facebook and Cambridge Analytica embroiled in the heart of it.

What is Cambridge Analytica?

(To all you rock-dwellers and hermits who haven't heard of this now- infamous company). Cambridge Analytica is a 'global leader in data-driven campaigning ' which uses data analysis of social media profiles to inform targeted advertising on the web. It is a London- based firm with offices in New York and Washington D.C., and was founded in 2013 by the merging of UK psychometric marketing company SCL (Strategic Marketing Laboratories) and US hedge fund Renaissance Technologies.

'We did all the data, all the research, all the analytics, all the targeting'.

This data collection and profiling was achieved through the development of a model created by Cambridge academic Aleksandr Kogan.

It was at the Psychometrics Centre where Kosinski developed, with his colleagues, a profiling system using general online data, Facebook likes, and smartphone data.

Stilman's 'My Personality Project' was born from a student side project. Its website describes it as 'a popular Facebook application that allowed users to take real psychometric tests'; it holds 6,000,000 test results, representing more than 4,000,000 individual Facebook profiles. 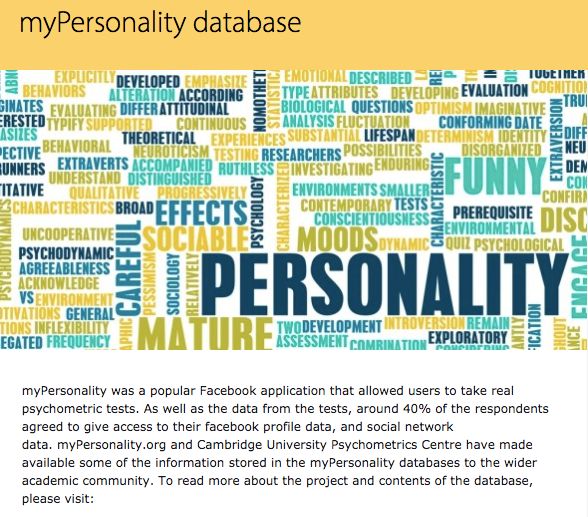 According to, Kogan was inspired by 'My Personality Project' to develop his 'This Is My Life App', which provided the basis for Cambridge Analytica's data analysis. He also allegedly approached Kosinski, to license his project for SCL to use, but was rejected. 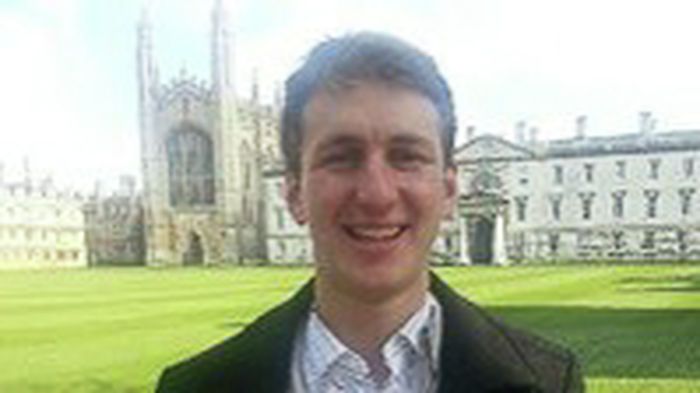 Kogan's collaboration with Cambridge Analytica started via SCL, for which he was already carrying out research. Kogan had also co-founded GSP (Global Scientific Research), a commercial scientific research enterprise. His business partner, Joseph Chancellor, claimed to own a 'massive data pool of 40+ million individuals across the US', for whom they had generated detailed personality profiles. Chancellor was a PostDoc Reseacher at the University of Cambridge, and is now a 'quantitative social psychologist on the User Experience Research team at Facebook'

Inspired by projects carried out at the University Psychometrics Centre, Kogan developed the 'Mechanical Turk' model for Cambridge Analytica, which takes information from Facebook users' and their friends' profiles.

Facebook claims that Kogan did not inform them when he changed the app's purpose from academic to commercial, and that he should have informed them directly. The company also says that the app description initially read 'This app is part of a research programme in the Department of Psychology at the University of Cambridge'. 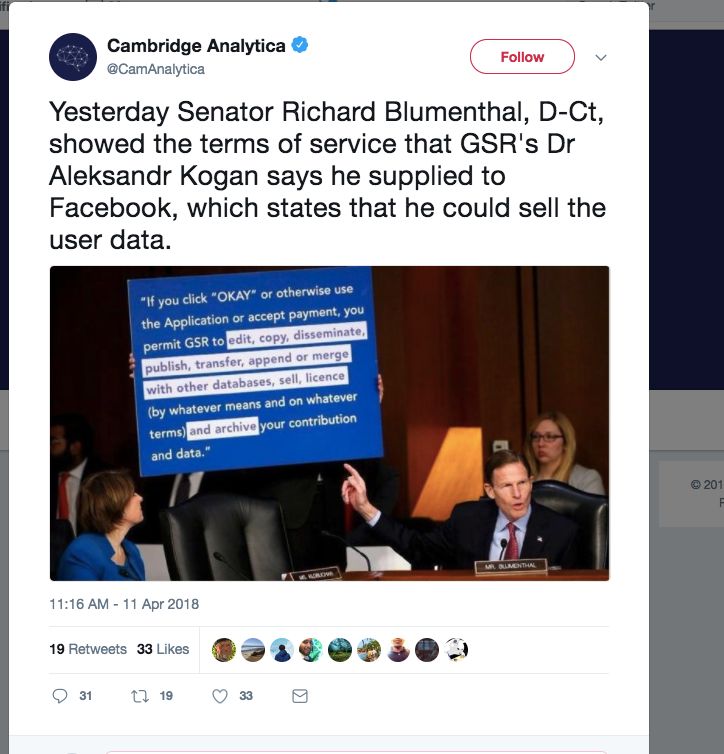 Mark Zuckerberg's accusations against the University of Cambridge

Zuckerberg directly implicated the University of enabling users' data to be harvested and sold to Facebook. Speaking to the US Congressional hearing, he claimed:

'There's a whole program associated with Cambridge University, where a number of researchers – not just Aleksander Kogan, although to our current knowledge he's the only one who sold the data to Cambridge Analytica – there are a number of the researchers who are building similar apps'.

'We do need to understand whether there is something bad going on at Cambridge University overall that will require a stronger action from us'.

In a separate statement, Ime Archibong, Facebook's Vice-President of Product Partnerships, stated that the company would:

'Continue to work with the UK ICO (Information Commissioner's Office) … to ask the University of Cambridge about the development of apps in general by its psychometrics centre, given this case and the misuse by Kogan'.

Zuckerberg has made the allegation that the Kogan's project and collaboration with Cambridge Analytica is not unique, and that further apps and data collection initiatives are active in the University psychometrics labs. In the past couple of days, information has emerged over the development of an app developed by company CubeYou, in conjuction with the University: a quiz named 'You Are What You Like'. It is one of CubeYou's 'most viral apps'. It has just been suspended by Facebook, for breaching data.

The University rejects claims of any links to Cambridge Analytica. In a press statement, a University spokesperson said that:

Two days ago, the University stated that it has sought evidence for Facebook's allegations made against Kogan:

It is not yet known whether Cambridge Psychometric Labs were used for the cultivation of data harvesting, for commercial purposes, or if Zuckerberg will follow through on his threats to 'investigate' the University.