BREAKING: THE ADONIANS SHUTTING DOWN

Secret society has its final dinner at Peterhouse

The historic society, The Adonians has just announced that its final meeting has taken place. In an e-mail sent out to society members, the Society notes that the March dinner marks the end of its notorious dinners. 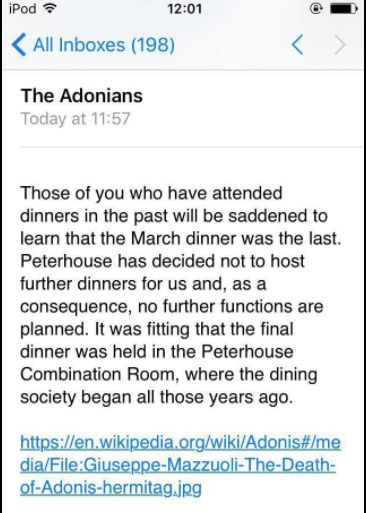 An end of an era for some

Port, lavish dining, and homosexuality: the society is legendary in Cambridge history. It was founded in Peterhouse back in the mists of time, to allow homosexual fellows and students to meet, eat, and mingle.

Excess is the defining feature: the actual dinner itself is a grandiose five course affair based in Peterhouse. Many illustrious alumni of Cambridge have been involved in the society, including Michael Portillo.

More about the society named after famed Greek beauty, Adonis

In 2015, the Tab went undercover at a society dinner, and also predicted its imminent end in another article.

It is not clear why Peterhouse College has decided to no longer allow the dinners to continue. The Tab has contacted the Senior Tutor at Peterhouse, who told us the College did not wish to comment.