PARADISE PAPERS: Why Cambridge students should campaign for divestment

Let’s make a noise in this city of libraries

I feel lucky to have joined the uni when the Cambridge Zero Carbon campaign is at its height – the student voices calling for divestment are as loud and strong as ever. This Tuesday saw one of the biggest and noisiest environmental protests at the university, an Emergency Protest in response to the revelations of the Paradise Papers. There was a march for divestment from a fossil-fuelled future in which Cambridge University realises the role it should take on the world stage.

The university should steer clear of this profit-seeking investment strategy, which condones the actions of major oil companies, such as Shell and BP. By keeping our shares in these companies the chief Investment Officer is literally BETTING on the collapse of the 2016 Paris Climate agreement to keep global temperature rise below 2°. Therefore, through investing, Cambridge is undermining these global targets. 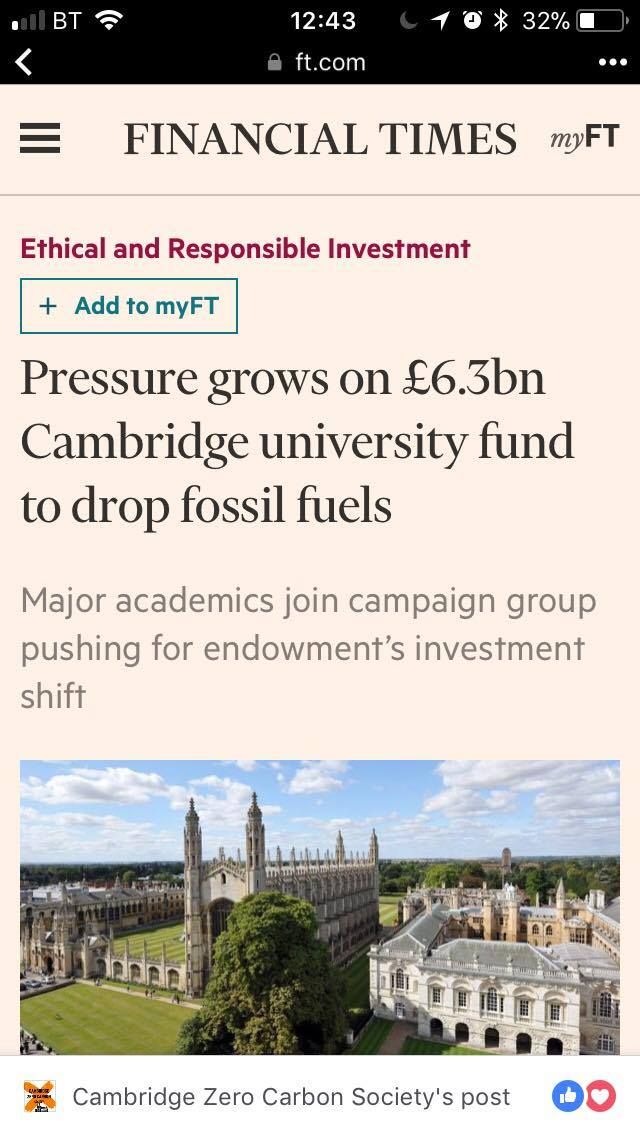 As Cambridge students, our voice does gain a greater weight. Arriving at Cambridge, our influence has automatically grown to new proportions, as we are now affiliated with an institution that has been in the news this term pretty much EVERY DAY. Students' words and actions can speak for a university, or dramatically against it. This uni, as it turns out, is a pretty big deal.

Since we are students at the university, we certainly have a right to be interested in Cambridge's global image, and, contrary to what the anonymous Grudgebridge might think, where they put that fat endowment fund. As part of this university’s future, we suddenly have a degree of access to influence where that money is put. 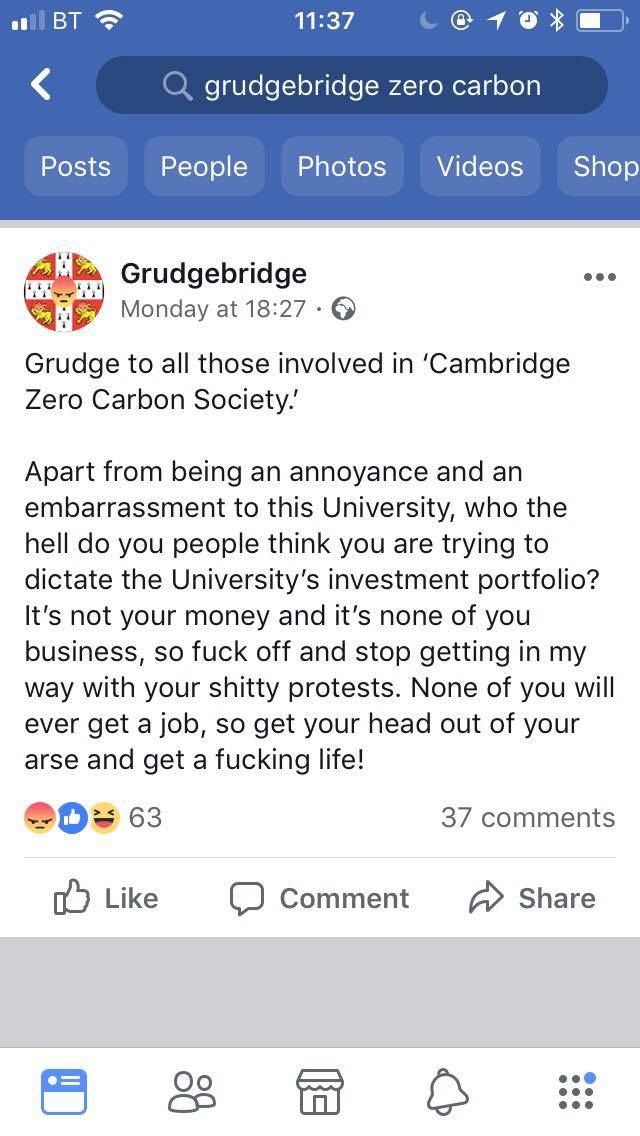 Pray for us, we will never ever get jobs. maybe i'll lose the one i already have

It should be emphasised that the issue of climate change is one that is pervasive, and raising awareness of this has not just limited to one society. This year, the CUSU BME campaign, FLY, and WomCam have flagged my attention. If you haven’t checked them out already, each of these campaigns are strong and vocal, cutting to the heart of what needs to be addressed within the institution. But BME and Women’s issues are also relevant to divestment. As a member of the campaign committee explained, climate change is inherently an issue of race. “As an issue created by the Global North, but which will largely be paid for by people in the Global South, climate change and those who contribute to it are perpetuating the dehumanisation and degradation of communities of colour around the world. From Black communities in London who are disproportionately exposed to illegal air pollution, to climate refugees in Dhaka fleeing already rising sea levels, people of colour are already suffering the effects of climate change, and the longer institutions like Cambridge take to divest, the worse this will get.”

It's so easy for students to get involved in campaigning. Through being involved with Zero Carbon, I've met postgrads, Cambridge citizens, and alumni. Even university staff are involved, Fellows, Deans and Masters are speaking at our events, such as at the Town Hall last Tuesday. It is something that can unite people across Cambridge.

And no, it’s not a futile effort. I believe that our voice is being heard by the university, since a working group on divestment has been established, and debate is welcomed at the divestment-focused town hall meetings. We can highlight to those making the decision, in May this year, the sheer hypocrisy of leading research into environmental studies, whilst ploughing millions into the fossil fuel extraction industry. If Cambridge divorces from these companies will be a public statement – making a stand for how we should ethically treat our planet. Surely this is what a university should be about? 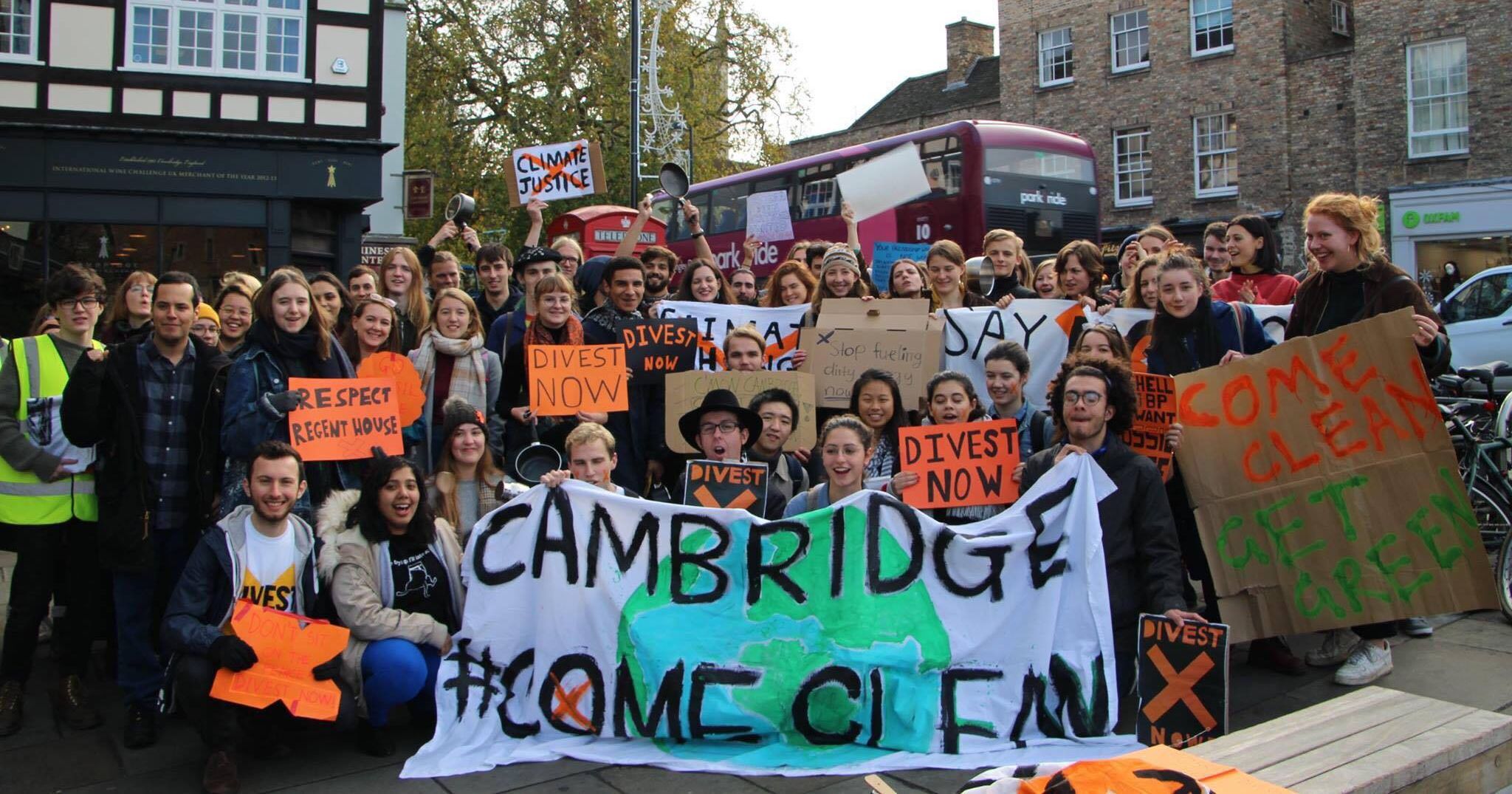 Student voices can have a big impact

Some argue that keeping our shares is essential in order to engage with these companies and pressure the move from fossil to renewable. Yet we have been in this relationship for decades – and results have yet to be seen. The shareholder position is limited in power. Let’s show the companies that we need more urgent change, and collaborate academically to get the changes faster. We can always reinvest later.

We shouldn't just ignore what the Paradise Papers have exposed. The 2016 Working Group report told us that Cambridge’s investments would reflect ‘the interests and values of the University’. There are over 3000 signatures on a petition against the investment of fossil fuels. This university claims to be democratic, thus even if not all of us believe in divestment, students should at least push for a democratic solution. Cambridge, it's time to come clean.