Last week, individuals within Jesus College found themselves embroiled in a misogyny scandal after they were overheard shouting misogynistic and rape-inciting chants.

An email sent by Alex Rowe JCSU Women’s Officer, drew the attention of all college members to the incident, which took place last week.

The email stated that the chants were heard around the orchard in the college, where the words could clearly be overheard by students who lived in North Court. 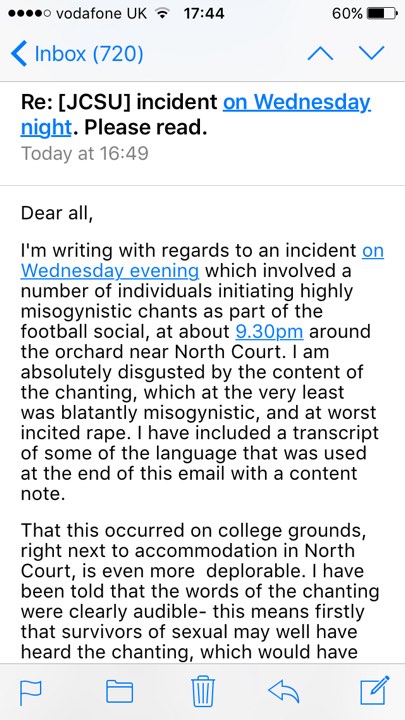 The punishment meted out to those who participated is not yet known, with a statement provided to The Tab stating just that “disciplinary action is being taken”. One student at Jesus told us that she thought they should be banned from the annual May Ball, which took place last night.

The email also detailed the content of the chants, and instructed students to  “make no mistake, these lines are about rape and sexual assault.”

They included lines such as:

“A woman came into the store asking for some materials, materials she wanted, felt she got”

“A woman came into the store asking for a KitKat, a KitKat she wanted, four fingers she got” 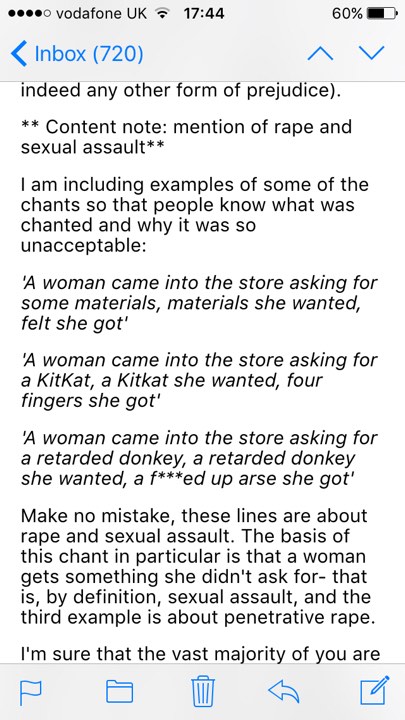 The Tab contacted the University for comment on this matter, and a spokesperson from Jesus College responded: “We are aware of this incident. It has been investigated by the Dean of College and disciplinary action is being taken. The College opposes all forms of harassment, bullying and sexual misconduct, and this is not the behaviour that we expect from our students.”

This is a developing story. If more information is provided regarding the punishment of the students involved, it will be reported accordingly.