For a pretty sizeable player in the Cambridge nightlife scene, Boomslang is still remarkably unknown within the bubble that we call Cambridge. It’s a city-wide phenomenon, drawing huge crowds to the Junction for line-ups featuring some of the biggest names in dance music – previously including the likes of Shy FX, Ms Dynamite, Rudimental and David Rodigan. Like much of local culture, however, it has failed to penetrate the Uni nightlife scene despite making Cindies and Lola’s look like school discos.

I can’t think of anyone who is as well-respected in the world of DJ-ing as the legendary EZ. Having championed the sound of UK Garage since its beginnings, the man is truly influential and an inspiration to any aspiring DJ. He has always been in demand, and recently his bookings have soared due to the resurgence of UKG, with acts such as Disclosure and Redlight incorporating elements of the garage sound into their mainstream output.

The turntable wizadry he showcased was unbelievable, moulding every piece of music to his own whim and desire – snippets of iconic vocal samples floated in and out of the constantly morphing beats and basslines, whipping the crowd into a euphoric frenzy. Live musicians may criticise DJ-ing as being merely the playing of someone else’s music, lacking creativity of its own – I would advise them to go and see a DJ EZ show. It was a performance in its own right, using the pieces of music as building blocks to create something entirely new and exciting. There would be too many ‘moments’ to cite here – just watch the mix linked below and you’ll get the idea. Incredible.

British house act Duke Dumont had a tough act to follow and resultantly was a bit of a disappointment. Starting all too predictably on his trademark tune, ‘Need U (100%)’, he progressed through a fairly standard collection of house cuts, which, following the high-octane atmosphere fuelled by EZ’s tapestry of bangers, felt a little too muted for the main room at 1am (perhaps a re-jigging of set times could have been an idea…). One exception was the appearance of Boddika and Joy Orbison’s techno masterpiece ‘Mercy VIP’, but even this couldn’t convince me to stay in the main room. A venture upstairs was in order.

The acts representing Low Key were all local lads and up-and-coming house and garage DJs looking to make a name for themselves on the Cambridge circuit. And impress they did – I have never seen the top room so full of appreciative bodies moving to the music. The house vibes worked better in this more intimate setting, with a dark basement rave feel to it, and the young prodigies got the crowd going with a variety of bass-heavy anthems, even touching on grime classics such as Dizzee Rascal’s ‘I Luv U’. 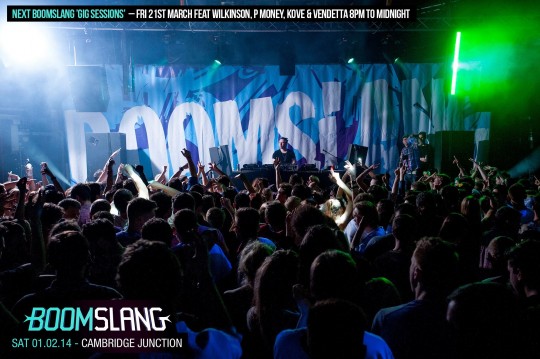 Certainly beats the hell out of the CIndies dancefloor

After the enjoyment of upstairs, I headed back downstairs to Toddla T (who I rather drunkenly harassed for also being from Yorkshire…) If EZ’s set was meticulously and ingeniously constructed, this was a just a fantastically joyful mash-up of a wide range of styles. Toddla had a deep and far-reaching knowledge of music, exhibiting himself with reggae classics such as Dawn Penn’s ‘No No No’ alongside his own productions, and a smattering of drum’n’bass to keep things lively. It was the perfect tempo and gave me my second wind at 3am to survive till 6am. Wide smiles and wide eyes all round, party-goers and music-lovers revelling in the atmosphere.

Dawn Penn: ‘No No No’ (how can you not smile when you hear this)

Stumbling to a taxi at 6am, soaked in sweat and feeling like I’d been put through a spin cycle at 2000rpm, the only thought on my mind was bed. The reflections on what had been a truly awesome display of UK electronic music could be made the following morning/afternoon.

A truly magical event – Boomslang, I salute you.