BETH SWORDS speaks to Melvyn Bragg about class, the fear of ageing and his hair care routine.

Melvyn Bragg has worked with the BBC since the 1960s, presenting The South Bank Show, In Our Time and Start the Week on Radio 4. He’s met and interviewed characters like Paul McCartney, Dennis Potter and Francis Bacon and has managed to bring questioning with an academic rigour into the mainstream.

He spoke at the Cambridge Festival of Ideas about his new book Grace and Mary – a book following his own mother’s deterioration from Alzheimer’s, exploring the need to create an identity for her.

BETH SWORDS got to meet him and languish in his recognisable, honey-like tones firsthand.

In your book, you spoke about the need to rediscover your mother’s identity when she contracted Alzheimer’s. You did this by rediscovering her past and reconstructing a narrative to give her some sort of grounding. If we compare this to someone ‘reinventing’ themselves, is it not okay or possible, for that matter, to live constantly in the present?

How important is the past?

It doesn’t matter how important you consider the past to be. It will always be there. The older you are, the more important it is, simply because there is more of it. The past is infinite and the future is finite. It’s got you in its grip. At the same time, it is always changing. At some points you may look back on an unhappy childhood, but 15 years later, you may see what you first felt was uncomfortable, as formative.

We are made up of where we’ve been on holiday, what we’ve read. Sometimes the past acts as a solace, sometimes an irritant, sometimes as a spur onto other things. The past is fluid – a motion that comes and goes with us. It’s not like a quarry but a pool of water swirling around us. This is relevant because it means that living in the present is almost impossible. People with Alzheimer’s are confusing because they do live exactly in the present because they simply have no past at all.

You show that this sense of re-invention of ‘the self’ will always be informed by the past. People talk about “being yourself”, is there such a concept? Surely this is really malleable and susceptible to change?

People are always moving towards a greater sense of coherence. A child is completely overcome by incoherent emotions and demands, but this always moves to greater coherence as they grow older and decide on what they enjoy and warm to. The ‘self’ therefore, is about a coherence of likes and dislikes, nothing more. People with Alzheimer’s regress back to an incoherence, like a child, almost. There clearly is still a personality there – but you’re looking only at parts of a person.

This is making ageing all seem quite daunting. Is growing old something we should fear?

I fear it everyday. The sense of doom is terrifying, especially when you’ve been exposed to the deterioration brought about by Alzheimer’s.

A cheery, optimistic warning for us all – kids, enjoy youth.

In your series Class and Culture, you came to the conclusion that culture had replaced class. Is it not that interest in certain aspects of culture denotes a certain class? Are these not just buzzwords for class? Houmous-lover aka middle class?

That’s what I’m saying – people are defining themselves no longer by class but by things. People don’t say, “I’m middle-class” anymore but “I enjoy going to the opera”. It’s all about different stresses so instead of class leading to culture, it’s the other way round – culture leading to class. People don’t take an interest in something because they feel they need to for the sakes of their background but because they like it. That’s what I was trying to say.

A sufficiently roundabout way of saying no.

You’ve been involved with the BBC since the 1960s, what was your best interview? What made it so? People often mention the Dennis Potter one, three months before his death, as one of note. What made it so poignant?

I always think a good interview is as good as the person being interviewed. Dennis Potter was good because he was relaxed and wanted to be interviewed. Francis Bacon likewise – this was a 12 hour ‘pub crawl’. It’s when the interviewee is really keen that it works. Bacon was keen.

How would you describe yourself as an interviewer and your role in the BBC?

Basically, I just ask people the questions I want to know the answer to. It’s less about me and all about the people we meet. They’re doing the interesting things.

And finally, other than being a fairly renowned personality at the BBC, your hair attracts a lot of attention. You’re seventy-four but have a mop that a thirty-year old would be proud of. Tell us your secret.

There is no secret. Sometimes you’re just born with things like this. 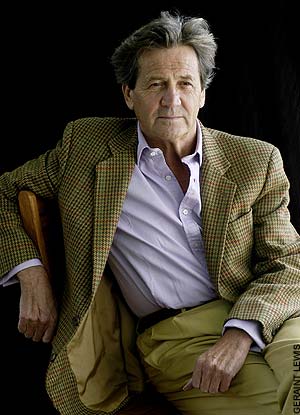