Monday marks the start of “Fat Talk Free Week”, an event organised by the CUSU Women’s Campaign to stop us ranting about fat and start getting on with our lives. The name is pretty self-explanatory: we are being encouraged, for one week, to stop any mention of fat. Whilst this (obviously) includes exclamations such as “OMG I’M SOOO FAT”, it also stretches to comments like “Wow, she’s so slim!”. The Facebook group promoting the week argues that “‘Fat Talk’ doesn’t change a thing, except our self-esteem”, and I’m inclined to agree.

So the two groups remaining are the individual complaining about being fat, and the people who compliment others’ slenderness. The main defence of both is that they don’t do any harm to others – they are either being complimentary, or highlighting the relative “success” of the other – but this only makes sense if you buy into the idea that skinny is always good and fat is always bad. This is never going to help anyone. Technically it is always possible to be thinner, so a position where that will always be an improvement means that nobody can ever be satisfied.

The second argument is that in some way complaining about fat is a motivator to shift it. Firstly, an incentive to shift it is only good, if the fat is definitely bad. Secondly, people that moan about losing weight are like people that constantly moan about quitting smoking – if you’re talking about it, it means it’s probably not happening. Part of the reason for this (with plenty of exceptions) is that aesthetic reasons for losing weight are a pretty shit motivator. The difference will take a long time to show, and for many patience wears thin. 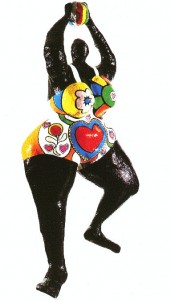 All of these arguments require people to agree that fat is bad, so the final defence of those that love their “fat talk” is that being overweight is unhealthy. True to a point, but if that’s what you’re getting at, then say it! I have no objection to somebody wanting to get in shape, but that is a much more broad and attainable aim than the fat mantra. It’s also much more sensible – the losing weight obsession is either health based or aesthetic, and if it’s aesthetic we’re fundamentally supposed to look good if we’re healthy (biologists, correct me if I’m wrong). This all seems very obvious, and many of you will sit there saying “Of course, what I mean when I say “lose weight” is get healthy, and everyone knows that”, and for some of you this is true. But there are people that don’t hear it like that. Every time someone asks if giving up all vegetables will help them lose weight, or drinking nothing but maple syrup, I don’t really care. You’ll feel like crap and probably go a funny colour, so it doesn’t look or feel good.

Of course, there are some people that don’t try and defend “Fat Talk” at all, they know all the arguments, and this whole article is a waste of their time. But if you already accept it’s a bit shit, what does it take to give it up for a week?