Bristol Uni has warned all students to “avoid the area around College Green” after another Kill The Bill protest is scheduled for this afternoon at 4pm.

The university has made clear in its email that “the safety of all our students at this time is paramount”.

The email adds that “in light of recent events” we “strongly advise” students to “avoid the area around College Green”.

Police vans are already on the scene. 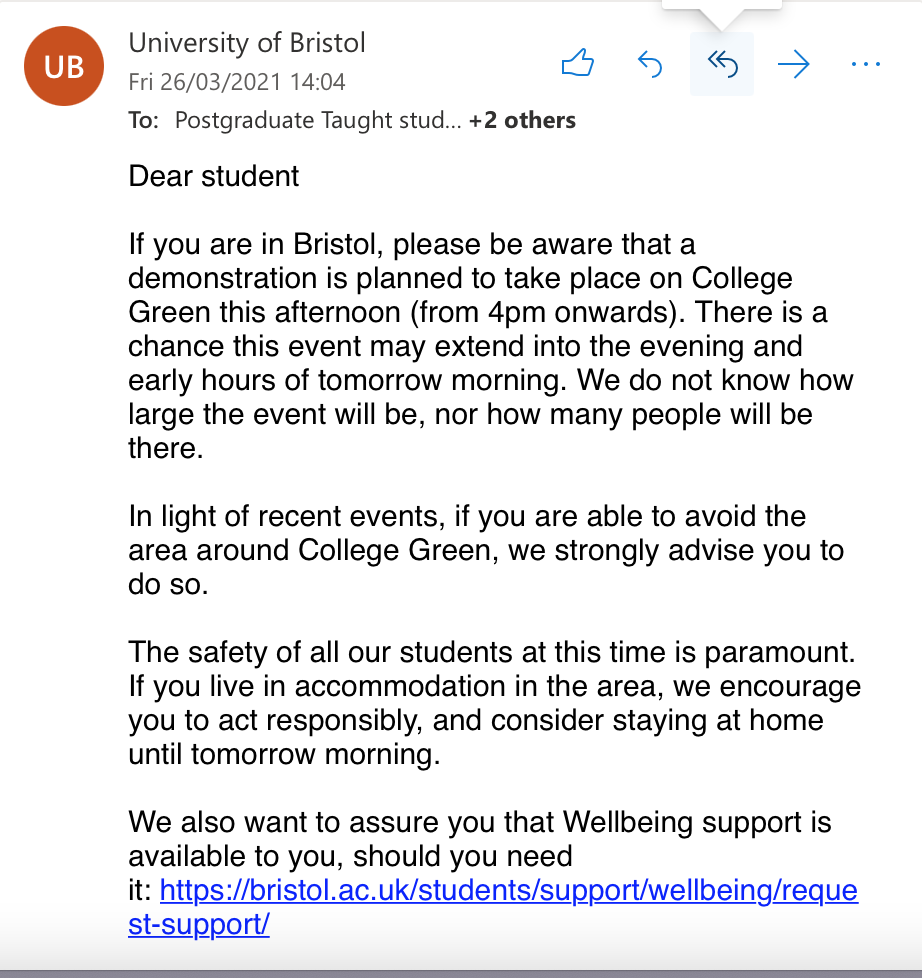 This is the third Kill The Bill protest that has been organised in Bristol. People have been gathering to demonstrate against the new Police, Crime, Sentencing and Courts Bill, which amongst other things, gives the police more powers to impose conditions on non-violent protests, including those deemed too noisy or a nuisance.

Though the first protest, which took place on March 21st started out as peaceful, violence broke out once it got dark. Protesters set a police vehicle on fire and smashed the Bridewell police station windows. Police deployed mounted officers and dog units, and seven activists were arrested.

An activist – who has previously helped to organise protests in Bristol – has also urged people not to attend tonight.

He said: “My belief is that, in this current climate of lockdowns, young people, bored and frustrated by their situation, witnessing a standoff with police in the evening, could be inclined to take out their aggression on the police who they may feel responsible for their lack of possibilities at the moment.”

BREAKING: A police van in Bristol has been set on fire during the 'Kill The Bill' protests. pic.twitter.com/lKVVkglJ5X

Police have urged campaigners not to attend tonight’s protest and have reminded people that protests like this breach Covid restrictions.

The email which was sent to all students warns that “there is a chance this event may extend into the evening and early hours of tomorrow morning”.

When asked what Bristol Uni Security Services will be doing to ensure the safety of students residences near College Green, a uni spokesperson said: “We’ve spent the day talking to partners who operate residences in the city centre to ensure they are aware of tonight’s protest so they can plan accordingly. Most of these have on-site teams, including some who have senior residents, who are on hand to support students 24/7.

“They did a great job on Sunday in making sure students living in residences close to Bridewell Police Station felt safe. All partner properties have security arrangements with security providers and buildings are protected with access control and CCTV.

“We are aware that many students will be worried and anxious about tonight and would urge them to seek support from the onsite teams in their residences or via the University’s Wellbeing services should they need it.”

Olisa Odukwe was last seen in Redland on Saturday morning

No need to book tables weeks in advance

Which supermarket caterpillar cake is your Bristol Uni halls of residence?

We all know Wills is Cecil from Waitrose

Even the universities minister says graduations should go ahead

‘Stop ignoring students, and stand up for our rights’

We all know a Karen on wheels…

‘Tell them we’re back and it’s business as usual’

‘We never walk alone at night’: UoB students open up about feeling unsafe in Bristol

This is part of a national movement

And it’s just as creepy as the last

Exclusive: Unis could finally be forced to have a legal duty for student mental health

There has been a ‘fundamental failing of care’ from universities towards their students, says the Conservative introducing the bill

Ethereum: What is it, how do I buy it and will Ethereum make me rich?

One ETH is currently worth around £2500

20 years on how well do you remember Legally Blonde? Take our trivia quiz to find out

Finally a quiz I’ll get full marks on

What is the Harry Styles My Policeman film that’s all over TikTok? Everything we know

He’ll be starring in nude sex scenes in it

Or will we, yet again, mistake corruption for incompetence?

Debunked: The reason why TikTok kept asking for your birthday in the last few days

If I get one more notification I will scream