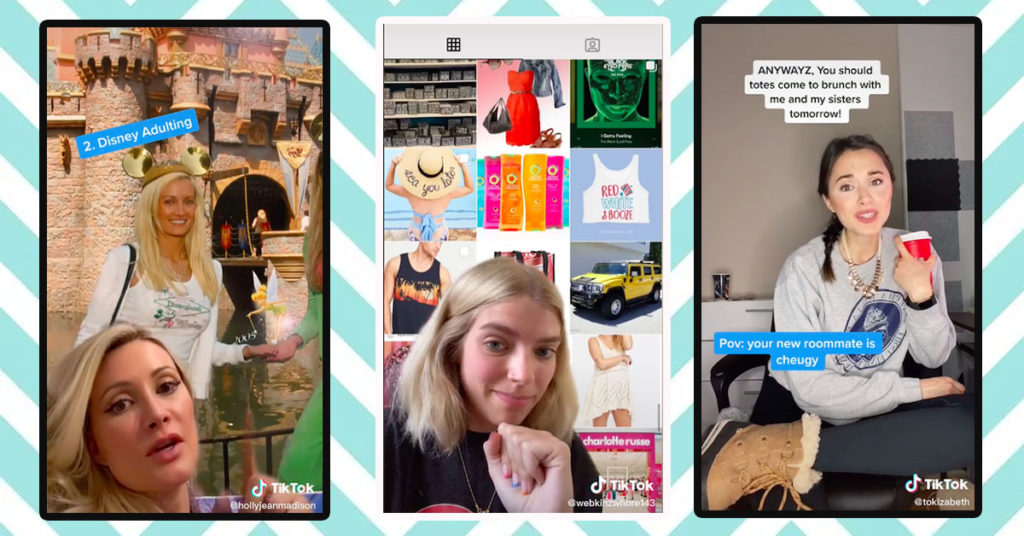 TikTokers are not done with the millennial bashing yet

Not a day goes past on TikTok without Gen-Z taking the piss out of millennials and now they’ve got a whole new word for it – cheugy. Side partings, live laugh love signs, chevron prints, Minion memes, a weird love of Disney after the age of eight, matching his and hers towels, yeah these things are all basic and millennial, but now they’re also considered cheugy.

Cheugy is kinda an extension of basic but it’s a very specific aesthetic and you can probably picture someone you know who you would describe as cheugy. They’ve probably got a wine glass with a girl boss font on it and still think Instagram is the most relevant social media platform.

Oh man, "cheugy" is a wonderful word. Thank you SO much Gen Z, once again, for finding the perfect word for a feeling I've been trying to put my finger on for 15 years.

The Cheugy hashtag on TikTok has over 1.3million views, but has been around for way longer than TikTok. This is everything you need to know about being cheugy:

What does it mean to be cheugy?

Ok so to get technical about it, according to Urban Dictionary “cheugy” means the opposite of trendy (ngl I feel like the word trendy is pretty cheugy).

They say: “The opposite of trendy. Stylish in middle school and high school but no longer in style. Used when someone still follows these out of date trends. This may include but not be limited to fashion, habits on social media, usage of slang, etc.”

It essentially is the perfect word to encapsulate that millennial, young married couple kinda person. Their personality, hobbies and interests are stuck firmly in the early 2010s when slogan tees, wooden signs, Ugg boots, captioning an Insta post “views” and calling a dog a “doggo” was the height of cool.

But it’s also more than that, it can encompass a whole variety of things that aren’t on trend. From straight TikTok to American college campus greek life. Cheugy is that cringe behaviour or look we’ve all embraced before and no one is above being cheugy. Even the coolest of Gen-Z.

Where does cheugy come from?

Them term cheugy was actually invented in 2013, right during the peak of millennial girl boss season. It was created by software developer Gaby Rasson when she was attending Beverly Hills High School.

Rasson told The New York Times she wanted to create a word that encapsulates people who are slightly off trend.

She said: “It was a category that didn’t exist. There was a missing word that was on the edge of my tongue and nothing to describe it and ‘cheugy’ came to me. How it sounded fit the meaning.”

The word then became popular amongst Rasson’s friends and eventually added to Urban Dictionary in 2018. However it wasn’t until the end of March this year when a TikToker started using it and it went viral.

Hallie Cain aka @webkinzwhore143 on TikTok then went viral for explaining the word and giving examples of cheugy things such as using Herbal Essences shampoo and posting a new hair cut on Instagram with the caption “I did a thing”.

How the hell do you pronounce cheugy?

Ok I love a word that takes the piss out of millennials, but could we not have come up with one that is easier to pronounce?

Apparently you pronounce “cheugy” as “chew-ghee”. So that solves that problem.

Are there any problems with the cheugy trend?

This trend is pretty harmless, but some people have suggested that like most millennial bashing, the trend is misogynistic.

Cheugy is part of a long tradition of making fun of white women for their cringe interests. First it was the Pumpkin Spice Basic Bitch, then the Christian Girl Autumn and more recently millennials in general.

However EJ Dickson for Rolling Stone said there is a big difference between bullying someone by using “markers of someone’s identity against them” and making a joke about posting Minion memes.

She said: “This is misguided: bullying is what happens when you weaponise markers of someone’s identity against them, and if you consider wearing Tory Burch sandals an integral aspect of your identity, then you probably need to take a long hard look at your own privilege.”

And New York Times reporter Taylor Lorenz pointed out cheugy can be applied to anyone, as at the end of the day, the word just means “corny, like trying too hard with the trends.”

•Who is the Y2K girl and why is she the coolest person on TikTok right now?

•Ok, so what is the sundress challenge? And why is it banned on TikTok?

•Ok, so what actually is the ‘that girl’ vibe everyone is trying do on TikTok?