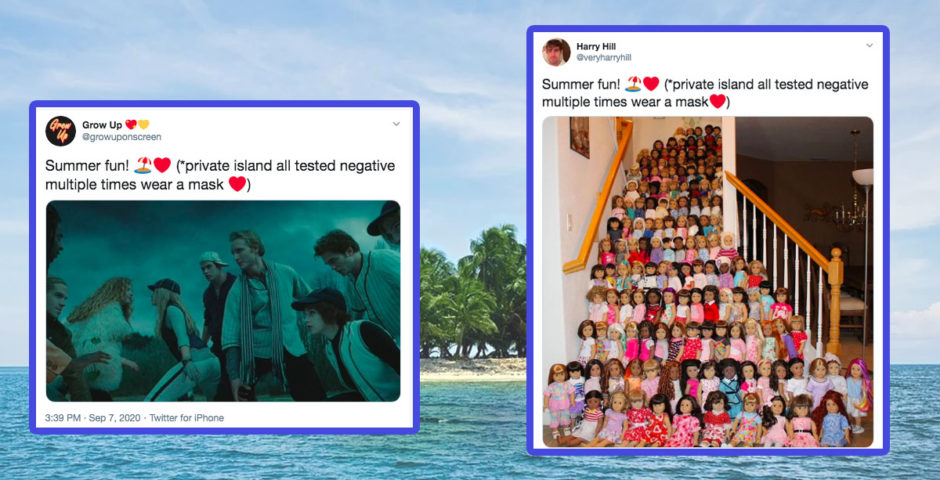 And none of them are wearing masks

Summer is almost over, but that doesn’t mean the memes have to stop, in fact there’s one last summer themed meme to see us off the worst July and August of our lives.

It’s the “Summer fun! (*private island all tested negative multiple times wear a mask)” meme that has been taking over Twitter the last few days.

The original tweet which started off the meme was a picture of Walking Dead actor Daniel Newman posing with 25 other people very closely without any of them wearing a mask in what appeared to be a pool. He accompanied the picture with the caption “Summer fun! (*private island all tested negative multiple times wear a mask)”.

Naturally it pissed off a lot of people especially as Daniel himself experienced symptoms of coronavirus and yet was not social distancing. And so the memes have started to take the piss out of the original tweet which has now been deleted. The best ones are the memes where the “private island” is not a fun place to be like The Hunger Games arena.

And there are others which just post big groups of famous casts or people together which makes for some very entertaining Twitter scrolling, these are the 31 funniest:

1. If you don’t recognise this as the ending scene to High School Musical 2 then we can’t be friends

3. Is it just me or does the moustache look good on him?

4. The stuff of nightmares

8. So much Scooby fun

10. You were rich if you had this expansion pack

11. Aquamarine would make a dress out of masks

13. I don’t know what is happening here but Daniel Radcliffe does not look well

17. Who wouldn’t want to be on a private island with Squidward?

18. The Cullens are the epitome of summer fun

19. For a seasonal switch up

20. The island of fun from our youth

21. Lol what fun this place will be

22. This was most people’s summer anyway

24. I do not volunteer as tribute for this summer fun

25. Wish I spent my summer with Will Turner

27. The Battle of Hastings was a lit summer

28. Now THIS is what you call summer fun

29. Is this Bournemouth beach?

30. God what a throwback

•I hope these 27 email memes find you well, unlike the thousands in your inbox