The conclusion is part of the official report into November’s fire, in which the halls were destroyed by flames, but nobody was injured or died.

However, it reveals how two students trapped in their flats were rescued via their windows – one from the sixth floor by a cherry picker, the other from the second floor by a ladder.

The report reveals how close the student on the sixth floor came to tragedy: “Almost immediately following the rescue of this resident by the high reach appliance, the flat she was rescued from became engulfed in smoke and fire, and was subsequently destroyed.”

Greater Manchester Fire and Rescue’s report looked at the Bolton Cube fire against the backdrop of Grenfell and other tower block fires, and at the fire service’s response.

200 firefighters and 27 fire engines attended the fire, on the night of Friday 15th November. The building didn’t have sprinklers, the report said, but had been inspected two months before the fire.

Fire engines arrived on site within three minutes and 17 seconds of the fist 999 call.

It took until the next afternoon to formally account for all residents, leaving firefighters uncertain about the extent of its human impact. “Some personnel left the incident scene, many remaining on duty for the remainder of the shift, with the thought of the potential mass fatalities as yet not discounted,” the report said.

The report praised Bolton Uni staff for helping to collect information on residents who were unaccounted for.

On the evening of Friday 15th November, fire crews arrived to fire spreading across fourth and fifth floors of the block. Firefighters were forced to retreat from stairwell as smoke spread, recognising early on that “the building was failing to contain the fire.”

CCTV images taken within 10 minutes of the 999 call show the spread of the fire on the fourth and fifth floors.

“Firefighters attending the scene were faced with rapidly developing and unpredictable fire spread,” says the report.

“Burning debris falling from the sixth floor, collected within the recessed façade of the building at ground level, developing further seats of fire.

“This was particularly noticeable in the atrium area between the north stairwell and the accommodation. The fire then spread upwards, causing large amounts of radiant heat from roof level.” As the fire rose through the building, windows failed and flames entered student flats.

Images taken within 10 minutes of the initial 999 call show how quickly flames spread throughout the building: 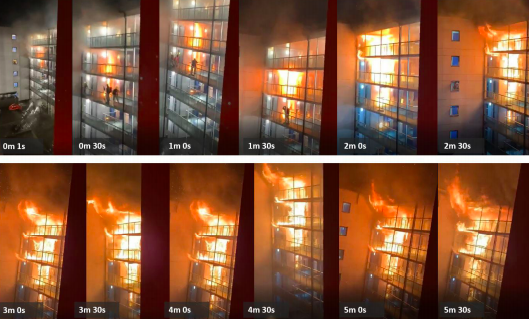 The building’s sixth floor was “fully engulfed in flames and completely destroyed.”

However, with the fire contained from spreading to separate buildings and from harming the block’s evacuated residents, the report praised ” the quick decision making that was undertaken by the initial IC [Incident Commander] and supporting fire appliance commanders in the early stages of the incident.

“The incident demonstrated the great courage and effective decision making of our firefighters and officers in the face of extremely testing circumstances.”