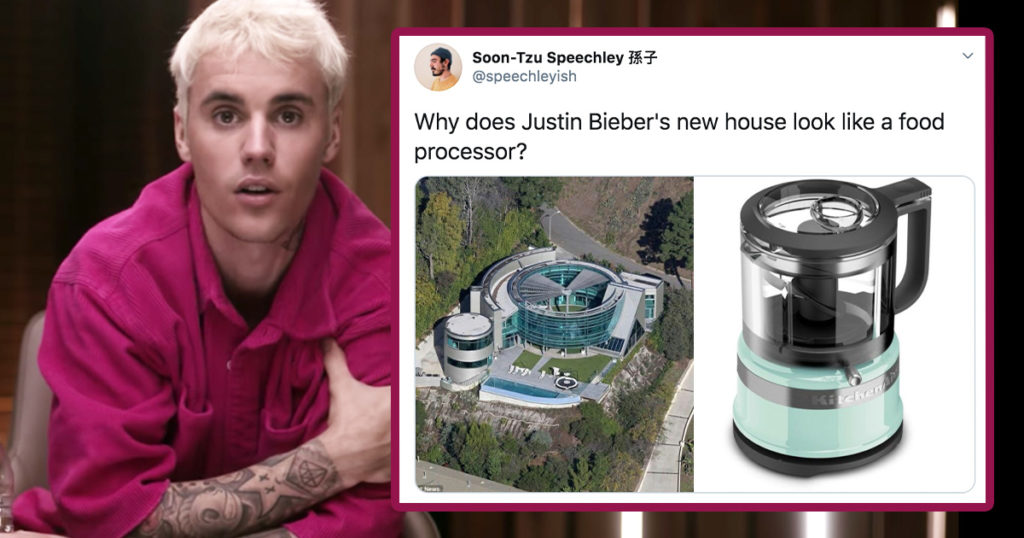 Right now, we’re all stuck in our houses isolating during the coronavirus pandemic. All over social media we’re getting a little insight into how the other half live as celebrities share their daily quarantine routines from their luxury homes. But one house we all can’t get enough of is Justin Bieber’s.

Apparently it’s his old house, but that hasn’t stopped the internet turning his “ugly” mansion into a meme. We can’t get over how much it looks like Avengers HQ, the BBC Television Centre or a blender. The memes are jokes. Here are some of the best things Justin Bieber’s house has been compared to.

Justin Bieber's house looks like if Amazon made a community college pic.twitter.com/h7T4jo9Bg5

4. THIS IS TOO ACCURATE

Why does Justin Bieber's new house look like a food processor? pic.twitter.com/yZ8IcylzWd

5. You’d definitely get lost on the way to the terminal

Justin Bieber's house be looking like a fucking airport pic.twitter.com/EiuGMjlnlo

Real estate agent: Do you want your house to look like a museum, a college dorm, a science lab or a giant fan?

7. You mean to tell me this isn’t the same building???

Everyone’s saying Justin Bieber’s house (first picture) looks like the Avengers HQ, but am I the only one thinking it looks like the BBC Television Centre? 😂 pic.twitter.com/fIw4qbnt4t

8. An insight into the design here

If you put two teaching academies together you get Justin Bieber’s house pic.twitter.com/CKv674ny8J

I kept trying to think of what Justin Bieber's ugly house reminded me of and yup it is the 1995 Micro Machines parking garage: pic.twitter.com/hcPrmCr90f

14. This house knows things about me

Justin Bieber’s house looks like a blender that costs £399.99, has Wi-Fi and ends up spying on you pic.twitter.com/rQt8uZhKZ3

15. You could wash a lot of salad in there tbf

16. You realise how ugly it is when you get into second year

So you’re saying that Justin Bieber’s house looks like the Avengers HQ. Bro that shit looks like a college campus tf. pic.twitter.com/5KyCmu2Mhh

17. This brings back memories

Justin Bieber’s house looks like a funky CD storage unit which everyone would spend £250 on at Argos in about 1997 but would turn out to scratch all your discs. pic.twitter.com/XxUrYxlTOG

Justin Bieber's house looks like a prison where the government keeps X-Men https://t.co/FxPY59vWtR

Justin Bieber’s house is your university’s new £50m state-of-the-art teaching and learning centre that is currently empty because all teaching has been moved online. pic.twitter.com/YUOP6okyU9

Why did Justin Bieber live in the research center of a SimCity expansion pack? https://t.co/kZzBwd1D0j

Having said all this, I could think of much worse places to be isolating right now than Justin Bieber’s ugly house.