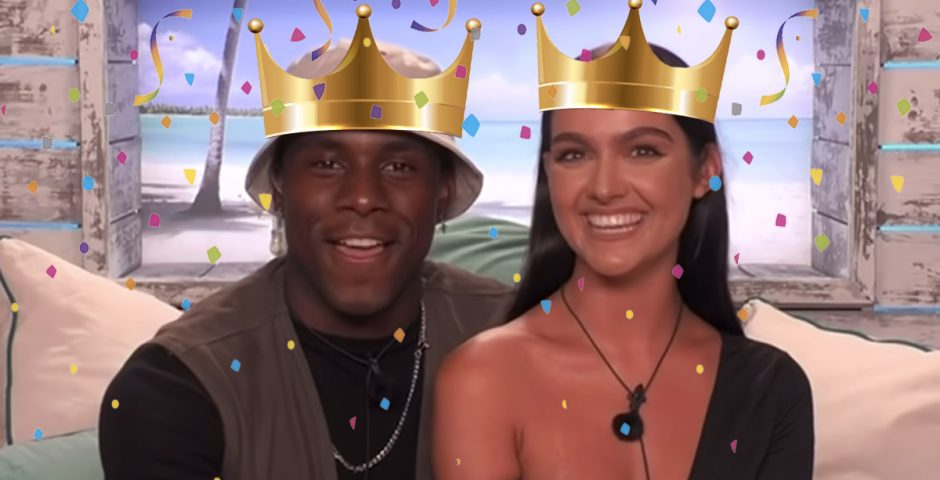 Winter Love Island’s Luke T and Siânnise Fudge are making the nation believe in love again. They’re teaching this cold, hard, Brexit-torn country how to feel, and we can’t get enough of it. They have to win this series, because frankly, no one else deserves it. I would even go as far as to say that they deserve it more than any of the previous winners of Love Island.

Ok, hear me out. They’re not like the usual couples who are top pick to win the series. These couples are generally the ones that have the most personality independently of each other (Amber Gill. Oh and Greg), can manage to hold a conversation for more than one minute (Kem and Amber) or simply have played it so safe that they’ve been together from the start (Jack and Dani). The bar is very low. Sometimes the fan favourites to win aren’t even together, that’s how low the bar is. And as they like to say, it’s Love Island, not friend island.

So here is a comprehensive run down of all the reasons why the winners of this season of Love Island can only be Luke T and Siânnise, and any other result is a crime.

They genuinely adore each other

These two don’t just fancy each other like other couples, it isn’t all necking on under the sheets and kissing with way too much tongue, they’re the real deal. That’s LOVE, buddy. L-o-v-e. They want to see each other and stare at each other, constantly. Staring and face stroking means you are in deep. This some Notebook level shit.

Twitter went down right before we could appreciate the cuteness that is Luke t and Siannise, my winners #loveisland pic.twitter.com/UQL1Ff3xQk

Also, they really fancy each other

I KNOW WHAT I SAID OKAY. But being super attracted to each other is just as important as adoration, and honestly not that many Love Island couples have it. Often we are tricked by the couples who settle down quickly, like Jack and Dani or Callum and Shaughna, but they have one fatal flaw: they just don’t fancy each other. They always peck instead of kissing properly, they never do bits because they “don’t want to do it on TV” and they become far too comfortable far too fast.

they got the balance riiiiiight ?? best of friends so they’re comfortable with eachother but strong sexual chemistry so there’s excitement ❤️? love u siannise & luke t #loveisland

Luke T and Siânnise want to bang. Categorically. Those two fancy the pants off each other. They’re a cute level of connected and into each other, without being an inseparable married couple just yet. The scene in the Hideaway, no matter how cringe the dancing was, just proved that. Watching other people be super into each other is nearly always a bit cringe, but that’s how you know it’s authentic.

Get you a guy that looks at you the way Luke T looks at Siannise ? #loveisland pic.twitter.com/0jcZ3EVNEx

Siannise was literally dancing around in lingerie for Luke T and he still asked if he could touch her before he laid a finger on her. CONSENT IS THAT SIMPLE. WE STAN #LoveIsland

They’re really funny as a couple

You know those couples that are just pure dead to hang out with? Some couples don’t actually find each other funny, and that lack of vibe becomes palpable when they hang out with a third party. Siânnise and Luke ain’t that. They find each other hilarious, they’re comfortable being split up and chilling with their own mates, but love to be together. They’re the type of couple you actually relish coming to social events with your friendship group, because they genuinely add something.

PLEASE THEYRE ACTUALLY SO FUNNY TOGETHER, THEIR ENERGY #loveisland pic.twitter.com/lfby2ulZcQ

They haven’t had an easy ride

Watching a couple who have been together from the start go on to win is getting boring now. The best part of last year’s final was watching Tommy and Molly-Mae have the 50k snatched out of their hands by Amber and Greg simply because the nation just loved Amber. And also because we’re sick of the easy Love Island journey, we want DRAMA.

Siânnise was initially coupled up with Nas, and honestly we kinda hated her for a bit during that time. But she turned it all around when Luke T came in. And then Rebecca went for him, and fights were had. But after it all, they’re still together, and Rebecca was booted out of the villa faster than you can say Toon. Riveting. A rollercoaster ride. I’d vote for that.

Luke and Siânnise are easily the best dressed couple

Siânnise has been serving looks since the very start. Look back and you won’t see one dead fit or bland bikini, and her sunglasses are always next level. This girl is bringing some edge to Love Island and we ? love? to? see? it. Also Luke T whipping out that cream bucket hat? Please. The ribbed skinny jean wearing, chest tattooed River Island boys could never.

They look after the other Islanders

That Luke M speech was everything. If you didn’t already think Siânnise was the best thing to happen to this series, this scene would have changed your mind. Also, they managed to get Luke M and Demi together within 24 hours of grafting. They are the glue that binds this villa together.

#loveisland what Luke T and Siannise did for Luke M and Demi is the sweetest thing ever. Everyone needs friends like that?? pic.twitter.com/DOgmspElor

As Caroline Flack and Laura Whitmore just LOVE to say, Casa Amor is the ultimate relationship test. Both people were open to their new options but immediately decided they were happy with each other, and then they missed each other for the rest of their time apart. And Luke’s return to the villa, my God. Can you spell W H O L E S O M E?

Luke T and Siânnise's reunion was SO emotional ? #LoveIsland pic.twitter.com/iFbdOQEs9K

Luke T’s mum supports them as a couple

luke t’s mom crying at him and siannise reuniting, my heart ??? #loveisland pic.twitter.com/UIF2n59zKa

Honestly, what more evidence do you need? This is a relationship that you’d back in real life, and it’s ended up way more authentic than any of the other contestants’ couples, including previous winners. If these two don’t win, it’s official: Love is dead. You heard it here first.

• Vote: Who is categorically the fittest Love Island boy ever?