Jeremy Corbyn took over a uni yesterday. Here’s what happened

Students were only told with a text in the morning

This is not a normal day at uni, not least because it’s so cold you probably wouldn’t bother going in. Labour are launching their general election manifesto at Birmingham City University and it’s a circus. Armed police, every prominent political journalist in the country, and the whole shadow cabinet are here. And of course, Jeremy Corbyn.

Enthusiasm for Corbyn, or frankly anything political, which sent everyone mad in 2017 seems a long time ago now. It’s been a slow start to the election campaign and everyone’s boxed in to voting for the “least bad” choice. Can Labour change that by whipping everyone into a frenzy with their manifesto and this event?

Actually, if you’re a Birmingham City (BCU) student, the chances are you didn’t know this was happening. Not dissimilarly to a rave, the location was secret until a few hours before the event. “I just got a text this morning saying this was happening and we couldn’t come in,” one bemused BCU student told me.

So fair play to the seven or so students who’ve managed to mobilise and get here. They’re Jewish and protesting Labour anti-semitism.

Inside, news crews, Labour activists and BCU students fill the crowd. Yet more students line the four floors of balconies surrounding the atrium. 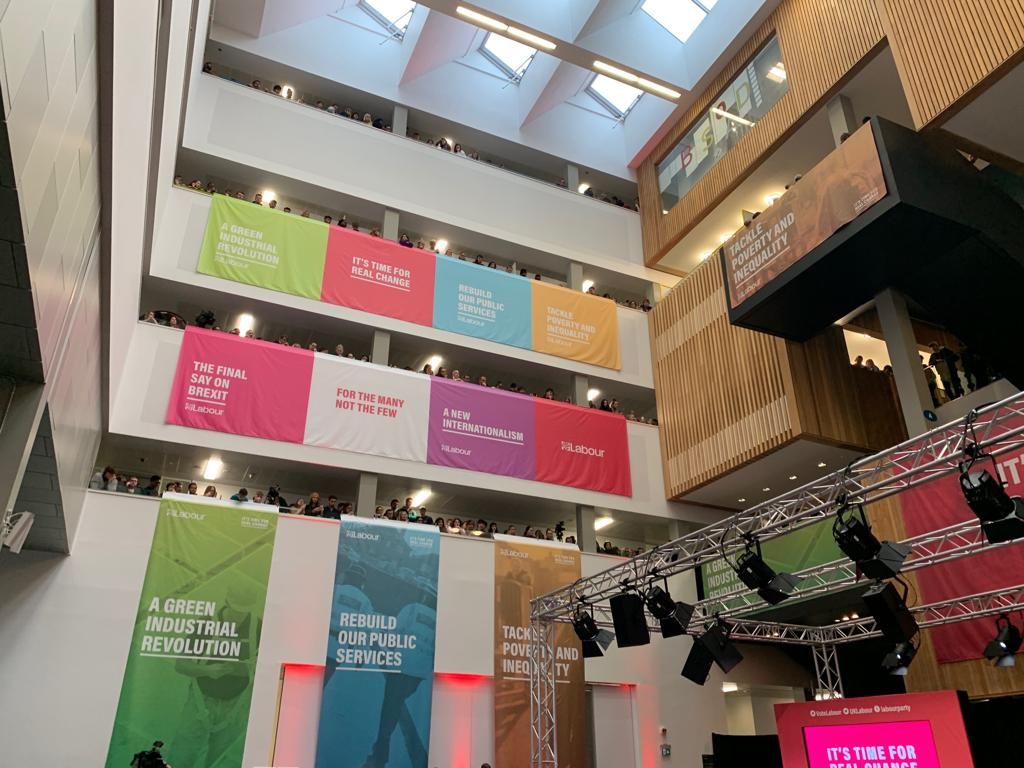 First on the agenda is Jeremy Corbyn’s arrival. We go in search of the big red battle bus, and find it.

Corbyn’s accompanied by the whole shadow cabinet – complete with John McDonnell, Diane Abbott, Kier Starmer, and the rest – waving to a press pit. Which sounds glamorous, but again is more reminiscent of the fenced-off smoking areas clubs put on pavements if they don’t have a proper one out the back.

It’s a jokey mood, with Corbyn talking about a scarf, with photographers shouting out questions to get a smile for their pictures. So I ask what Corbyn, a diehard Arsenal fan, thinks of Mourinho to Spurs: “We’re very happy with Unai Emery,” the current Arsenal manager, he laughs. “But Arsenal are still going to win”. This would be good, if it didn’t turn out to be the only question we managed to ask him all day. 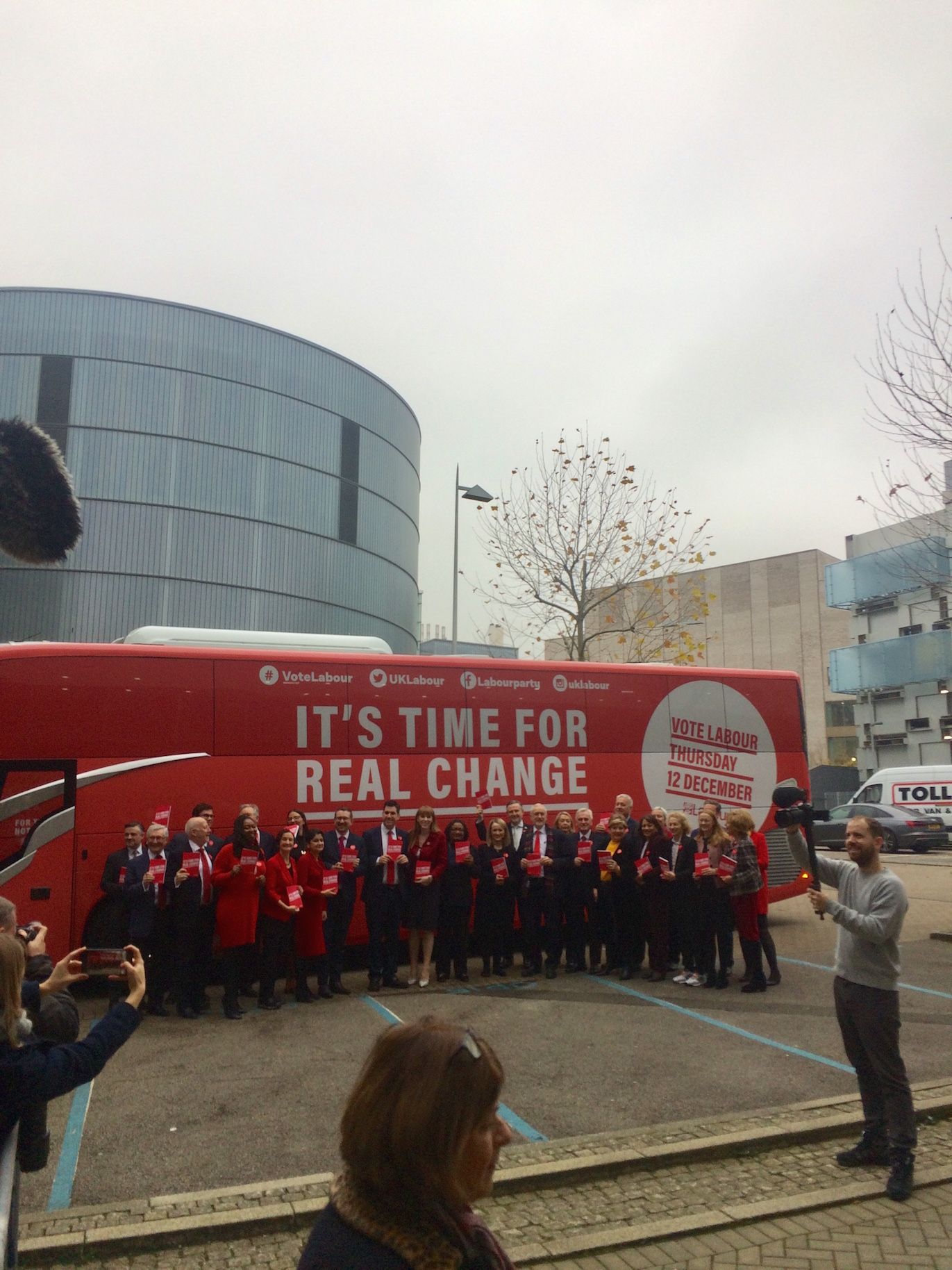 On the way back inside, we spot Corbyn’s son, Tommy, smoking a rollie in the shadows. The resemblance is obvious but, alas, “no interviews”.

Inside, finally, someone comes out with manifestos in boxes. Journalists flock to them like they’re the only cold cans at an afters. Little red booklets with “IT’S TIME FOR REAL CHANGE” on the front. For students, it’s pretty similar to 2017: scrapping tuition fees, bringing back maintenance loans, and ending casualisation of staff. No mention of what they’ll do with existing debt, though. Elsewhere, Labour promise to cap rents and introduce free bus travel for under 25s.

"Thank you all the students from this university,” are Corbyn’s first words as he gets on stage. From there, he attacks the Tories and sets out his stall, telling the audience “Labour is on your side”. He calls Boris Johnson’s agenda “Thatcherism on steroids”.

The key to Labour’s manifesto, Corbyn explains, is the "green industrial revolution" – Labour say they’ll create one million new jobs to help deal with climate change. Think people fitting roof insulation, working on electric cars, and so on. No mention of the dropped net zero by 2030 policy, though.

The manifesto is full of lots and lots of new things. It is extreme and radical, and Corbyn acknowledges that Tories will say “everything in this manifesto is impossible." However, later, the Resolution Foundation think tank, which is headed by a former Tory minister, points out Labour’s plans would take the extent of the UK state to a “mid-table European size”, saying “this is not radical from an international perspective, but is radical given Britain's recent economic history”.

But anyway, it’s jarring hearing Corbyn talking about plans to nationalise BT and provide the “very fastest, full fibre broadband, for free” whilst struggling to connect to the BCU free wifi. 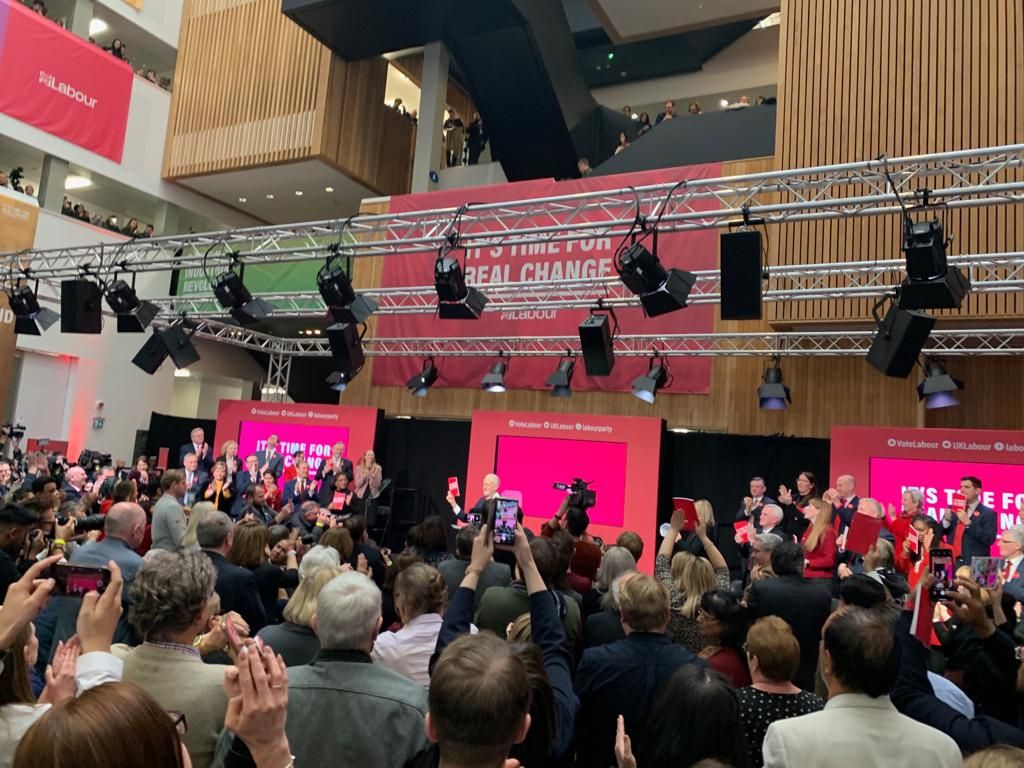 After an ovation where the crowd hear mention of the NHS and break out into a chant of “NOT FOR SALE”, he moves on to student stuff.

“If you’re a student, Labour is on your side,” Corbyn says.

“We will bring back maintenance grants,” before going on to unleash the big one:

“Let’s be clear: We will scrap university tuition fees”.

The crowd goes wild, and Corbyn gets his second standing ovation.

Once he’s whipped the crowd up into a sufficient frenzy at the prospect of a Labour majority and a transformed society, the speech is over and it’s time for questions. BBC Political Editor Laura Kuenssberg gets booed when her name is announced, for Corbyn to reply: “We don’t do that. All journalists will be heard with respect.”

The big student question is from BCU student Chloe Tong, who addresses the elephant in the impeccably designed room. Are Labour getting rid of existing student debt?

“It was a big offer made in 2017 which we’re repeating,” he says, saying grads shouldn’t start working life with a millstone around their necks. He promises not to raise interest rates or sell off the debts, but on the key question, he’s ambiguous: “We’re looking at ways to stabilise it, and bring relief”

That’s about as close to a clear answer as you’ll get. Corbyn walks off after finishing the rounds of questions, and the show’s over apart from shadow cabinet members doing a few TV interviews.

• 620,000 young people have registered to vote since the election was called

• 40 per cent of students are planning to vote for Labour, according to our poll