Lol how did Britain ever run the world? We’re a mess

Last night, ITV held a General Election debate between Boris Johnson and Jeremy Corbyn. Then an hour later showed all the other leaders being interviewed individually.

But the highlight of the night wasn't what the leaders said. The memes about the debate and the official Conservative Twitter account temporarily transforming into a "checking profile" stole the limelight instead.

These 13 memes from last night's debate prove we're living in a dystopian hellscape:

1. Someone made a parody Italian CCHQ account and it's hilarious

3. No but seriously, can we get Italian Elon Musk back or

So for reference they took away the verification and suspended the account of a guy who changed his profile to say “Italian Elon Musk” and tweeted “eyy whoa I’m buildin a hyperloop heeah” but the Tories apparently did nothing wrong?

5. And then it actually made it on BBC News lmao

6. !!! Genuinely thought this one was true 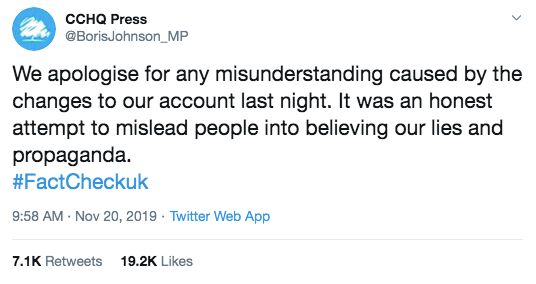 7. Hahahahha *puts clown make up on and votes for Lib Dems*

for those who didn't catch the reference pic.twitter.com/x6EWlbnUrV

Here's Jo Swinson getting her bit of exposure on the #BBCNewsTen ? pic.twitter.com/9B8vNEBKp8

9. Oh wait, not sure this one is a meme and now it's depressing

11. Ah yes, Lib Dems, the famous backers for us to remain in the EU and er – *checks notes* …nuclear annihilation?

?‍♂️ I have to be honest. I’m totally confused by this lib dem targeted ad. pic.twitter.com/I4GnTvHSob

12. I just want Love Island back, Ovie for PM

ITV should just stick to what they do best: The Chase and Love Island