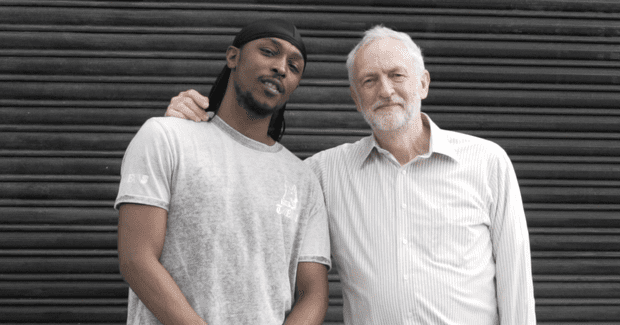 AJ Tracey and Grime4Corbyn step back from supporting the Labour campaign

Jezza isn’t the don Grime4Corbyn thought he was

Two years ago the unexpected world of politics and grime collided, as Jeremy Corbyn set out to pull in the under-45 voters.

In 2017, the Grime4Corbyn movement was created in an attempt to tap into and attract the young demographic of listeners who were also potential voters. The organisation was endorsed by acts such as Krucial, AJ Tracey and Novelist.

However this year, the movement has died down. With the current election campaign underway, the organisation doesn’t seem to have any gigs or events planned in support of Jezza. In fact, Grime4Corbyn’s website isn’t even active anymore.

In a recent interview with the Observer, Tracey said Corbyn wouldn’t be his first choice in the upcoming election. The support in 2017 only came about because Corbyn was the “best of a bad bunch.”

Tracey said: “It actually helped him a lot and I feel like he didn’t capitalise on it. He didn’t utilise what he had.”

The movement started gaining momentum after big names such as JME interviewed Corbyn. If you didn’t catch the JME and Corbyn interview back in to 2017, check it out below:

Whilst some supported the Grime4Corbyn movement, some were wary of the political group’s manipulation of grime. In an interview with Q, JME’s big brother Skepta said: “They’re back to doing what they’re doing. They use us – them, not me – for what they wanted to use them for and they’re back doing their bullshit. They need to understand we’re human beings.

“When they wake up, they don’t think ‘we’re helping people, we’re telling people it’s their world, live peacefully’. They think ‘let me manipulate this country for my personal gain.'”

However some have fought back, insisting the Grime4Corbyn movement wasn’t manipulated. Adam Cooper, one of the organisers of Grime4Corbyn, has stated they are working lowkey and discussing the impact of the campaign since 2017.

“I think doing the less high-profile work after the election: going to youth clubs, colleges and running workshops might have given the impression that we disappeared. Or that we weren’t continuing the momentum and that wasn’t really the case.

“Regardless of what they do, we’re still very likely to see a large portion of the BAME community voting for Labour.”

• Goats and free drinks: How unis are getting students to register to vote