Students who are into politics like to think they’re unique and special and important. They scream at you on campus and they will scream even louder on social media. There will be last minute pleas when Facebook profile pictures are changed. Tinder will temporarily become a place of very boring debates. And there are always the right-wing Brexiteers who are given far more time than anyone else on BBC Question Time.

Welcome to the 2019 General Election. It’s only been two years since the last one and yet nothing seems to have changed. The student Tories are heartless and the Corbynites are culty as hell. And there are still losers who think not voting is a personality transplant, when in actual fact, they just forgot to register. But really, the entire student body can be broken down into these eight very simple starter packs.

Introducing, the starer pack guide to every single university student during GE2019: 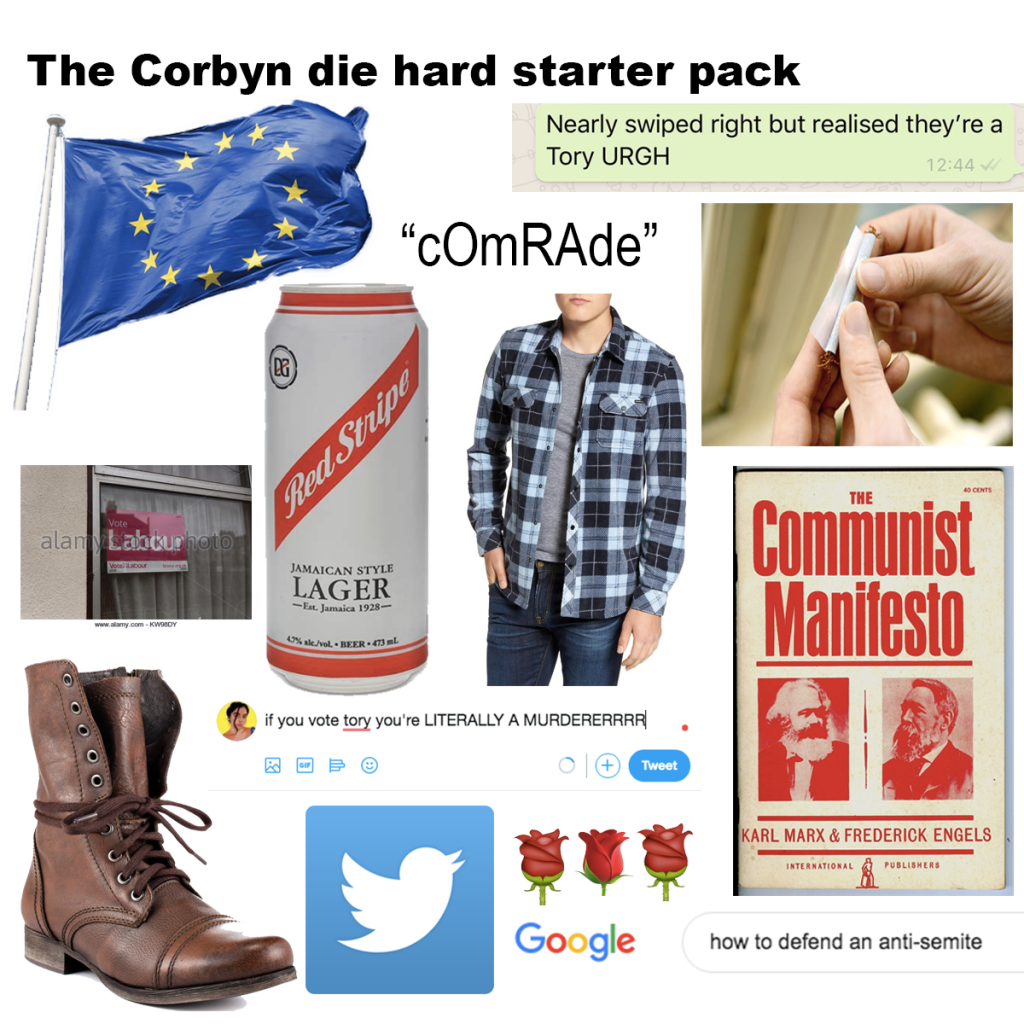 This particular type of student thinks people who vote anything right of Labour are actual murderers. They have also at some point tried defending totalitarian communist regimes which resulted in millions of people dying. Their favourite habitat is the SU bar, where they can be found singing along to Mr Brightside with their equally lame friends. 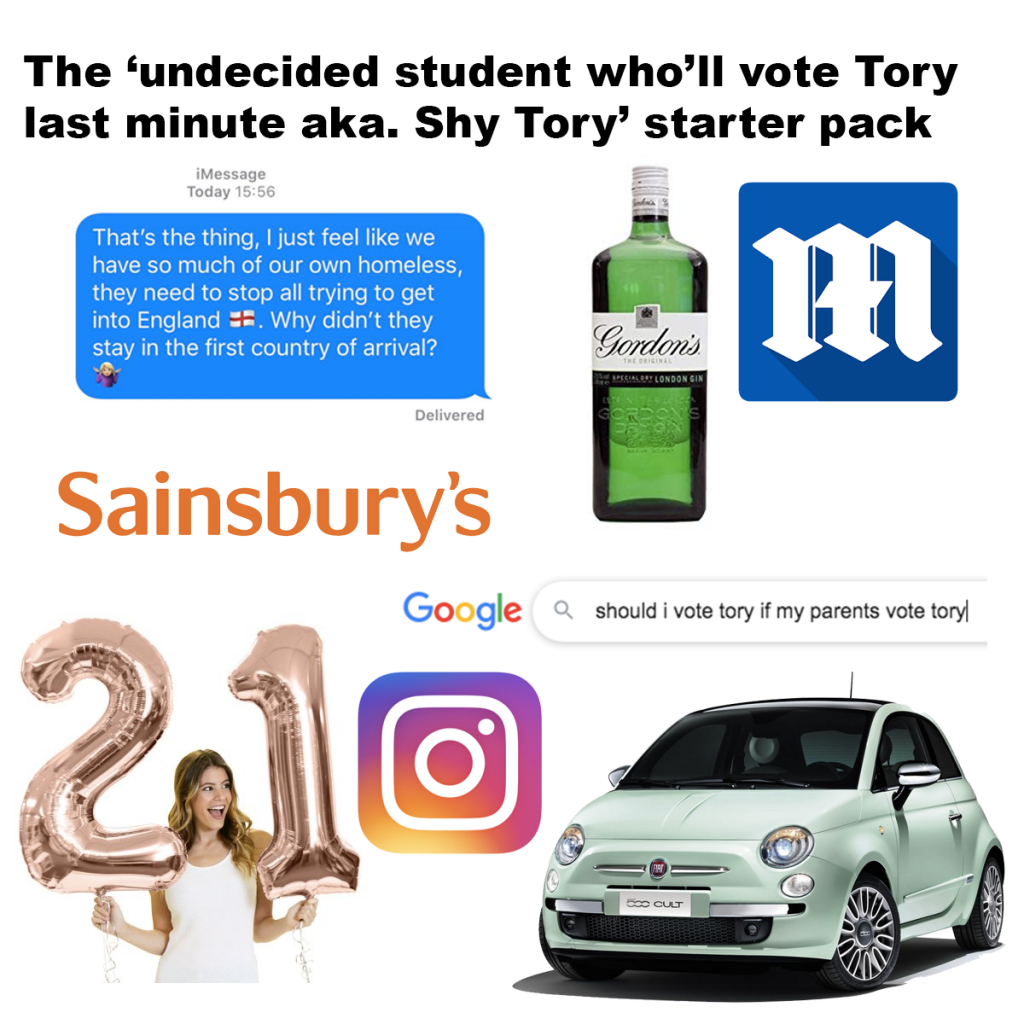 Have no agency because their Tory parents brainwashed them with the Daily Mail and a trust fund that would never allow them to experience the real world. Think Kylie Jenner is the literal definition of a girl boss because she made her first billion “without anyone’s help.” Exude Molly-Mae energy. Very into Netball. They’re the shy Tories of 2019. 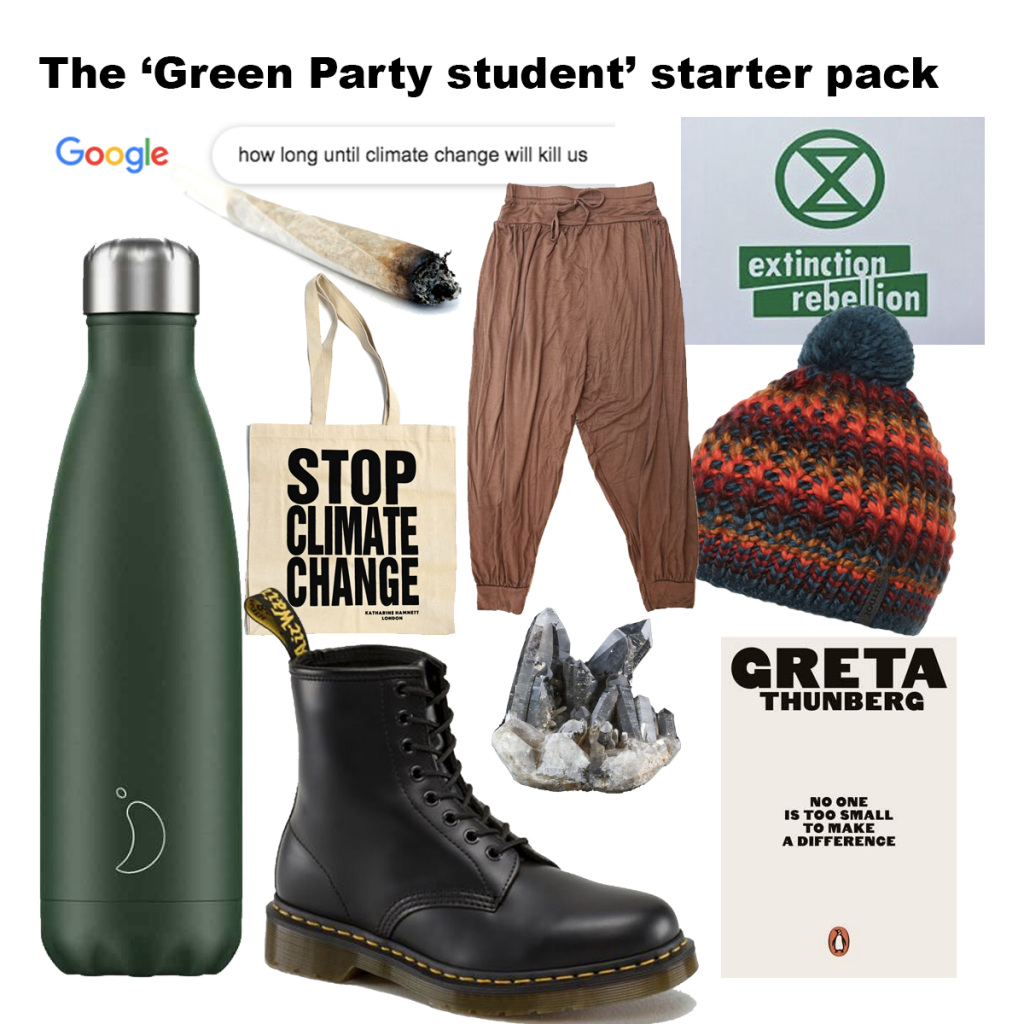 Can never agree on an actual date we’re all going to die. Will always share Facebook petitions to stop the poaching of some nearly-extinct animal. Last seen at all the XR protests in the UK this summer. Definitely consume more drugs than anyone else on campus. Suffer from severe eco-anxiety and won’t stop talking about it. Definitely into crystal healing or tarot, because the real world stopped making sense a long time ago. 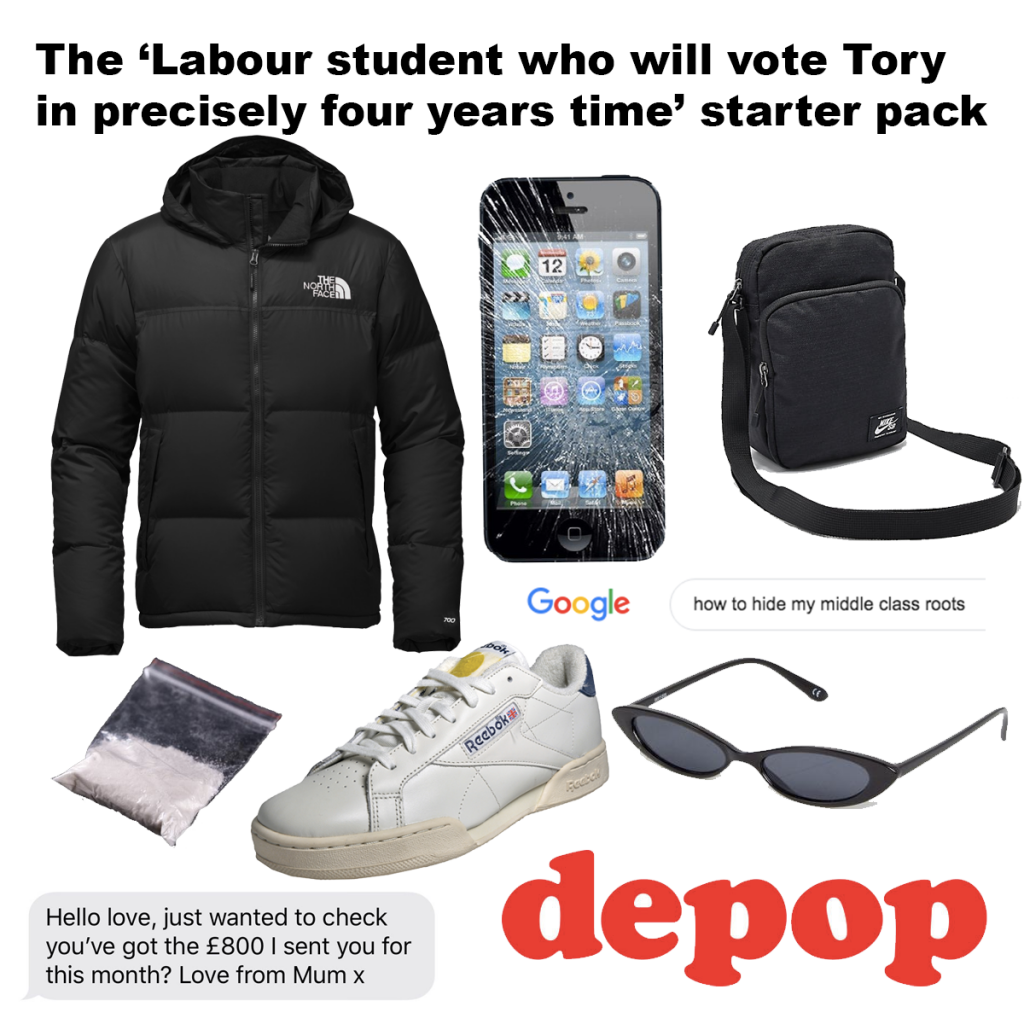 Will only vote for Corbyn if Stormzy or JME backs him. Do a lot of things for the clout. Watched Top Boy once. Say slang words like “roadman” and “ends” without any awareness of the socio-economic origin. Think they’re poor because they spent all their student loan on a stupid shoe. Bit of a football hooligan. 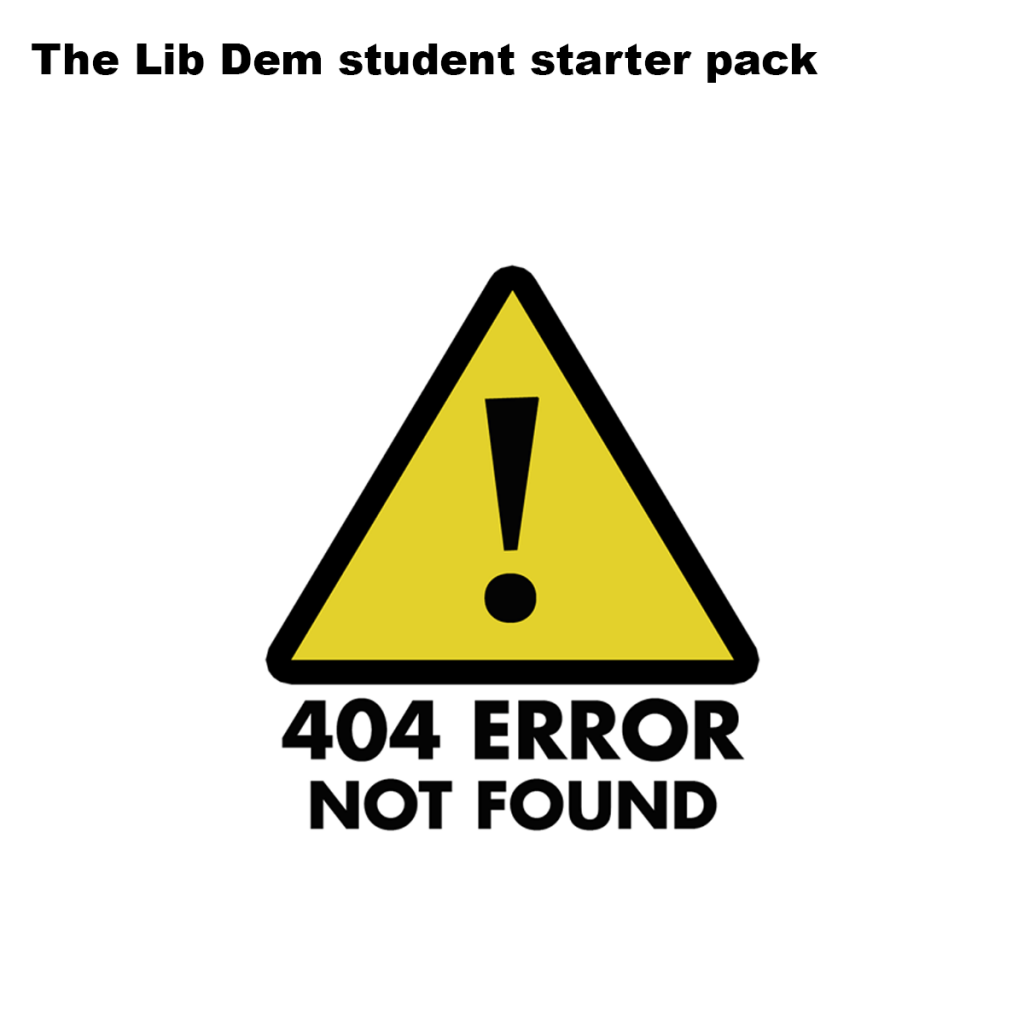 The students will never forget the betrayal of 2010. And the only students who are suffering from temporary amnesia to Lib Dem lies are the ones who can’t bring themselves to vote for Labour any more. 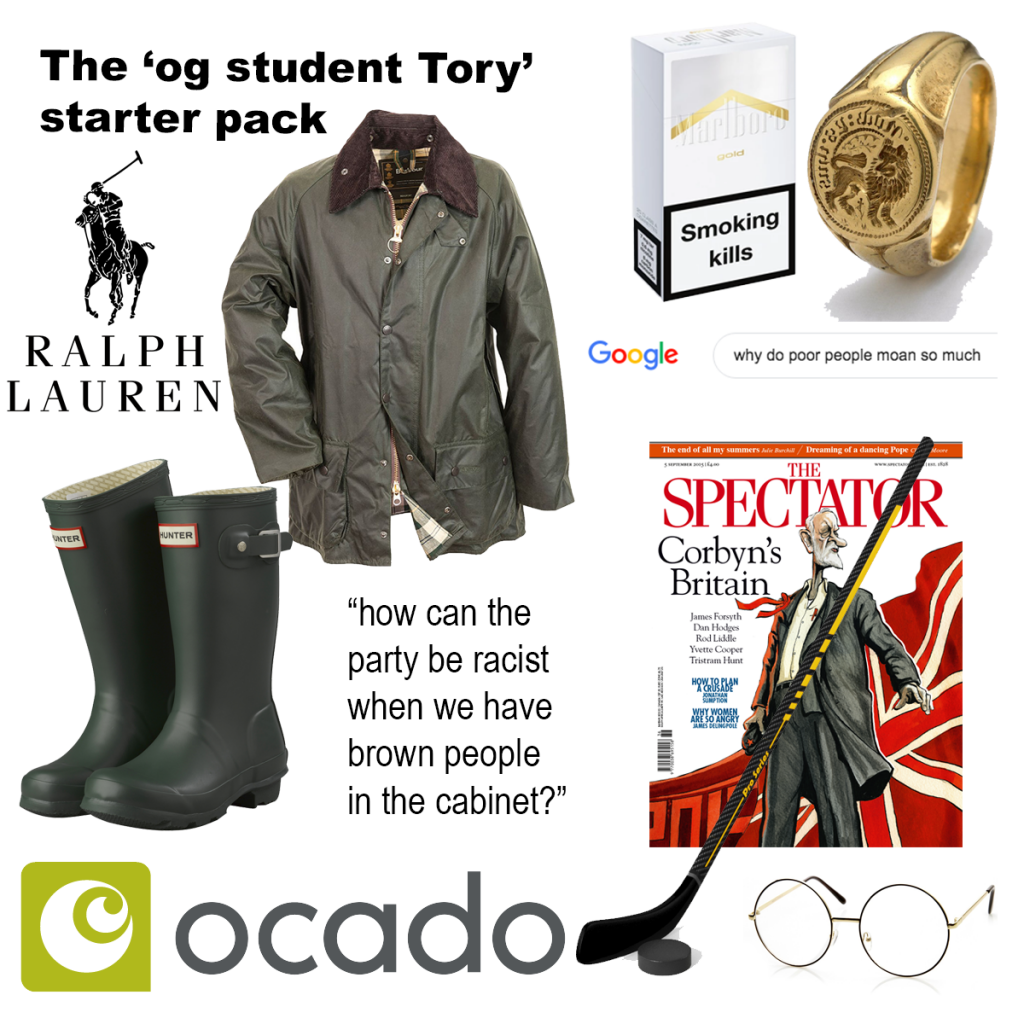 Will spend more time telling you how much they hate Jeremy Corbyn than actually explaining why they’re voting Tory. Probably have a shrine for Margaret Thatcher. If they ever decide to be kind to homeless people (rare), they will only buy them food. Will play either Hockey or Lacrosse. 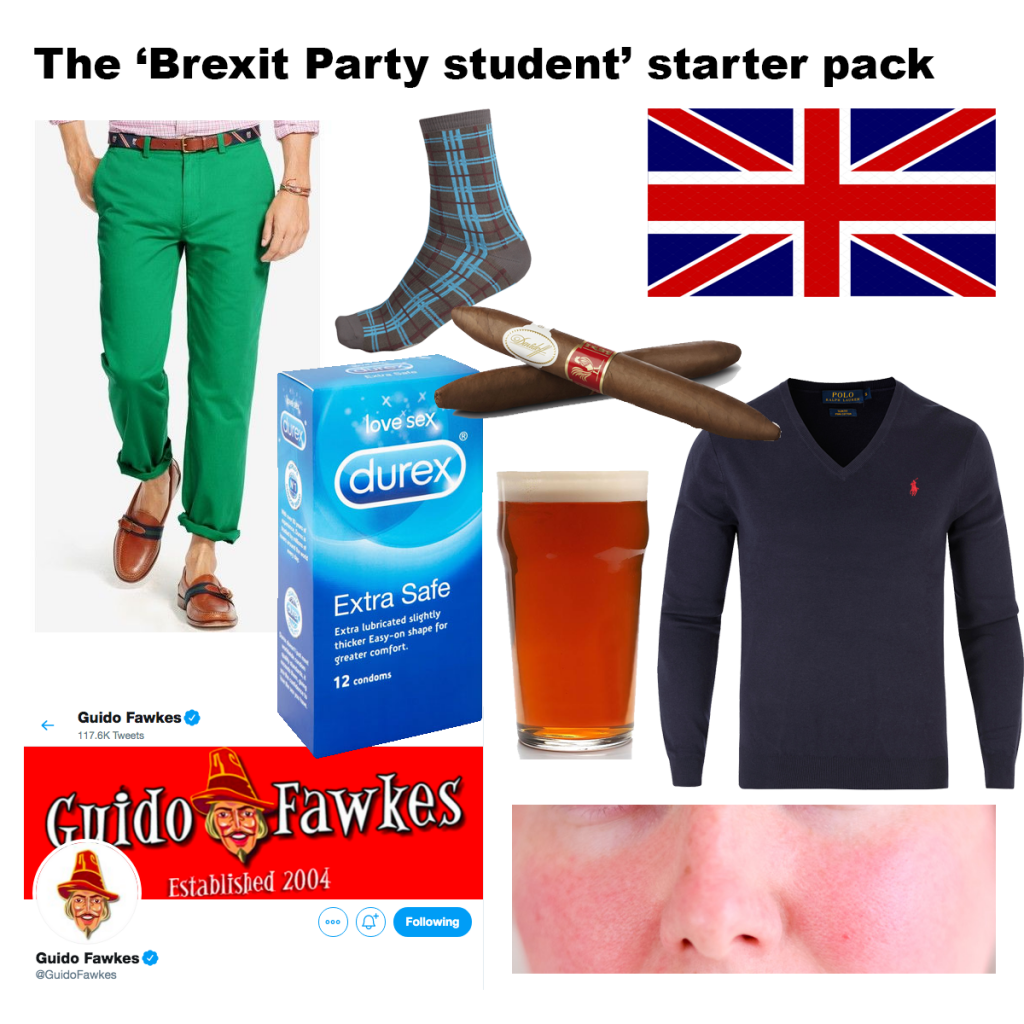 Shockingly, these people exist in this demographic. The only reasonable explanation is that they were dropped as a baby and deeply unloved during their childhood development.

These students just forgot to register and are trying to spin it off as some kind of “fuck the system” gesture. They lead quite sad lifestyles and spend a lot of time on the internet. Really into video games. Quite paranoid in general. Smoke lots of weed. Unironically think Bush did 9/11. Probably study Philosophy and think it somehow backs up their bullshit.