What 2019’s The Apprentice candidates do, according to their LinkedIns

BBC’s The Apprentice presents us with a simple, inescapable philosophical truth: The beings who Addison Lee their way round London doing Sir Alan’s increasingly banal tasks are simply LinkedIn profiles made human, corporeal manifestations of the world’s worst social media.

They are the banter graveyard where future consultatrons write how “delighted” they are to “collaborate on an important project” in the caption of a picture of their group presentation at uni, rendered touchable.

But what do these otherworldly beings look like at the level they truly exist? To discover how each of the candidates looks in what Plato called the Realm of Forms, you must examine their LinkedIn profiles.

And yet, it’s like staring at the sun. Nobody can do it for too long. You need us to yeet ourselves into their reality and return with a snapshot. Mission accepted. Here they are, in all their glory: 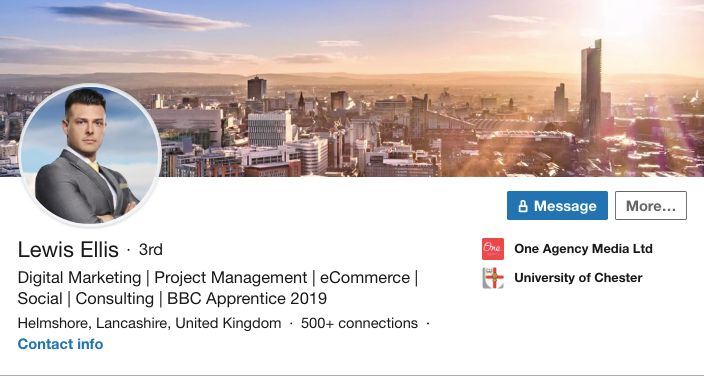 This is an incredibly detailed profile, complete with an aspirational cityscape. Lewis’ MSC in Business and Marketing from the University of Chester sits alongside reams of marketing experience.

On his blurb, Lewis talks a big game, describing himself as “a marketing whizz, young at heart and passionate about growing businesses!” He goes on to say: “I have a straight forward approach, I will get your business out there and I will do everything I can to exceed expectations.”

Interestingly, he’s personally licensed for the sale of alcohol until 2023. Which I think passes for wild on LinkedIn, but who can say.

Plus, you can download his CV and discover he has a pomeranian called Pablo. Here it is: 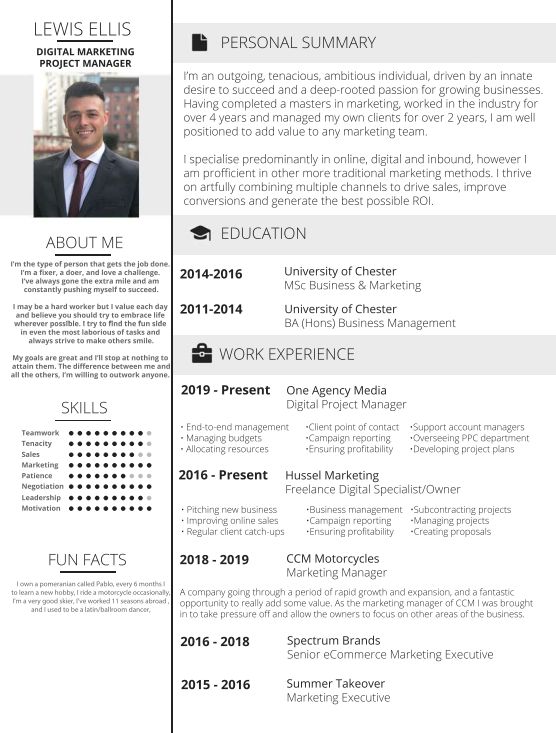 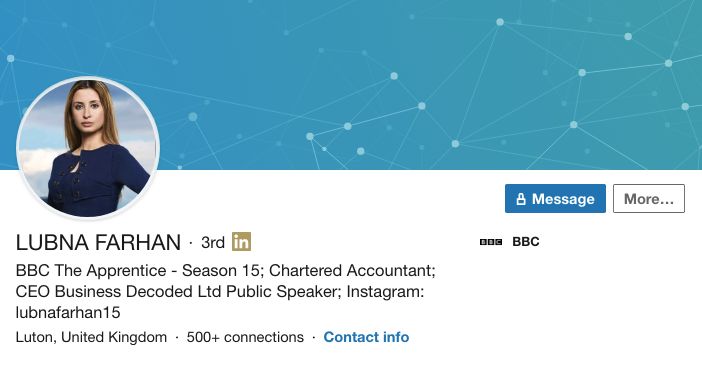 Her name is in all caps. She has The Apprentice on her profile. She’s an “ambitious and self motivated individual who loves to add value to people and oganisations.” LUBNA FARHAN is doing the absolute most on LinkedIn.

Her career has worked its way around the retail park just outside of town in exactly the same way your parents do on a quiet Sunday: TK Maxx, Costa, and then on to Tesco. 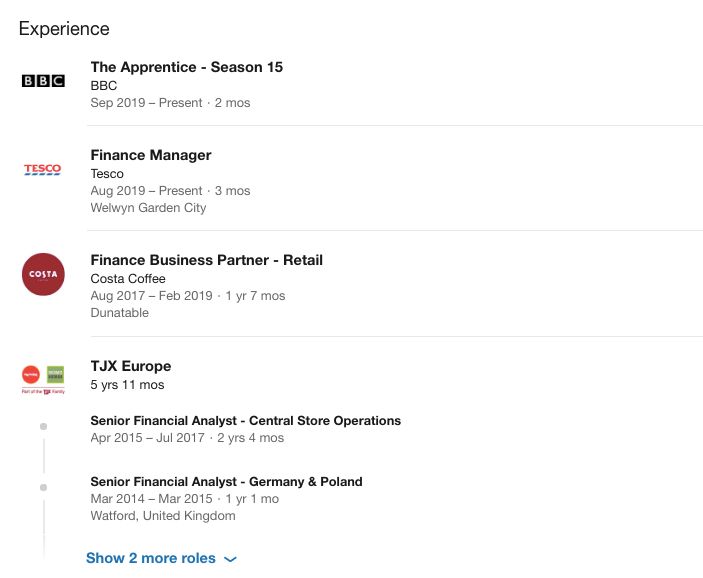 Suited up, looking at the camera at a slight angle? Check. Aspirational cityscape taken from very high up? Check. Dean’s LinkedIn is the Bort to Lewis’ Bart.

Oh wait, Dean goes further by writing about himself in the third person: “Dean Ahmad started his first business at just 15 where it became clear that he had an entrepreneurial flair which stood out. His passion for business and in particular sports led to his expertise within the global sporting industry.”

Dean says he’s brokered over two million worth of deals in his career as a sports agent across cricket and football. 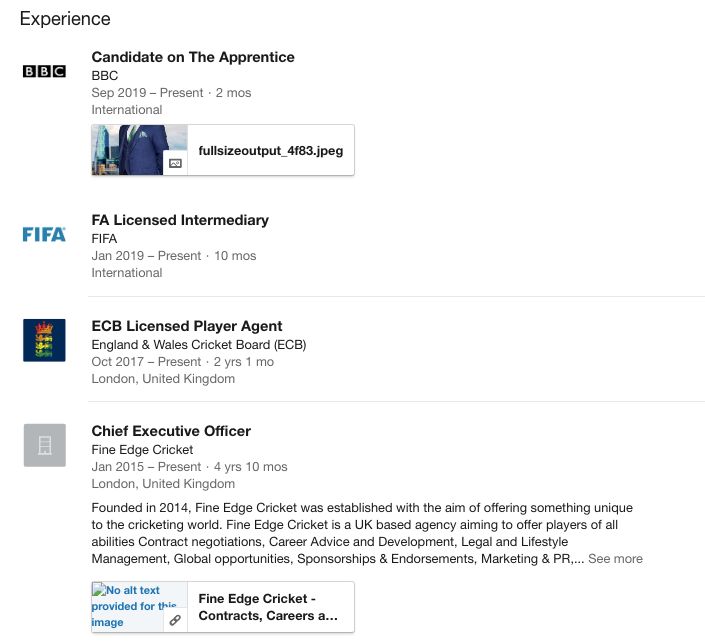 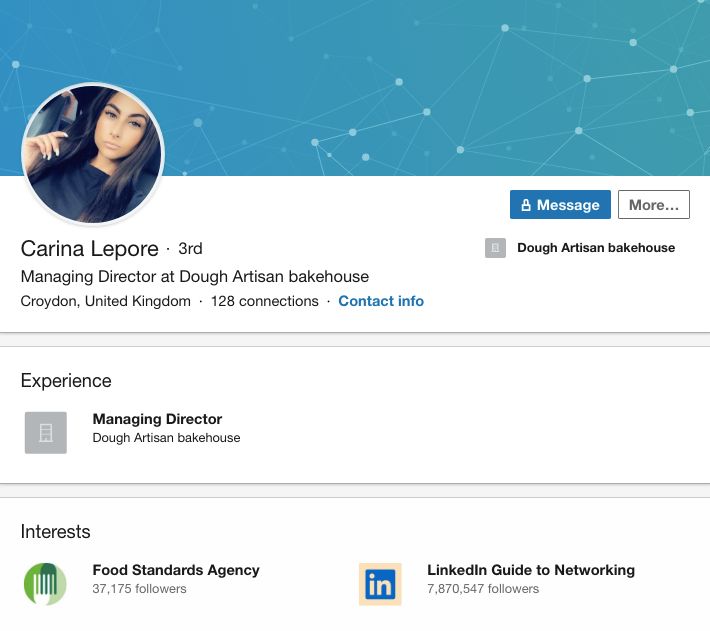 Finally, a somewhat normal LinkedIn!! That’s literally all there is to it.

To be honest, not much needs saying beyond the scary Capping up Of Random Words For a business-Like Effect. 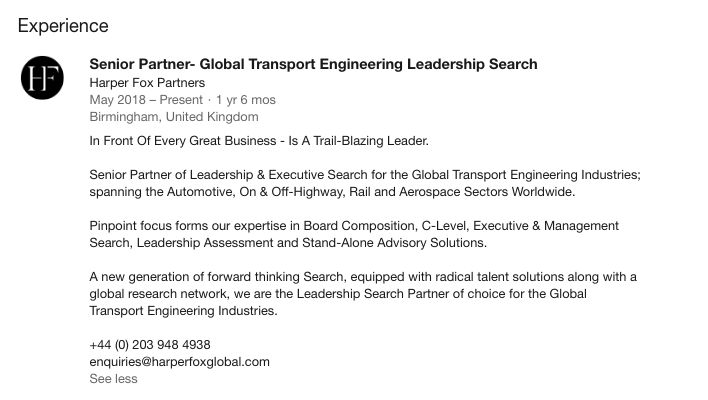 No picture, no bullshit for Jemelin. Except, perhaps, this job description: “Helping others create a life of freedom and financial stability all from their mobile phones”.

As a bio goes, it’s impressive, even if it doesn’t include the fact he was stood up on The Undateables.

But, importantly, unlike the other contestants Souleyman behaves like an actual human being, having a bit of a laugh. 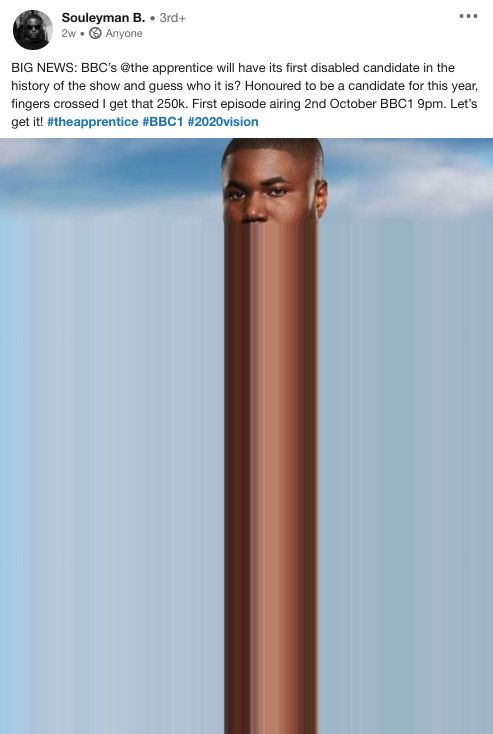 Lottie’s minimalist profile doesn’t really offer much. Her interests are “LinkedIn Guide to Networking” and “The Idea Bureau”. Yep, still nothing.

My guy has actually got the Apprentice group pic as his cover photo. Ryan-Mark’s profile gives and gives and gives, right from the moment you spy him adjusting his cuffs in his profile pic. 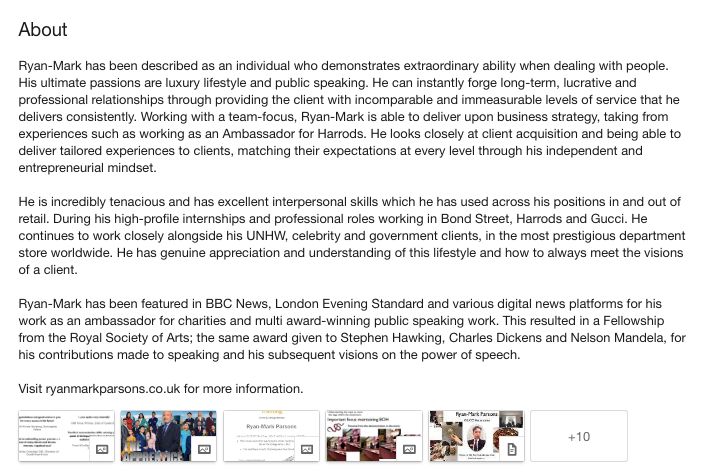 Look upon these licenses and certifications and despair. He’s even done the Anti-Money Laundering Training at Harrods. 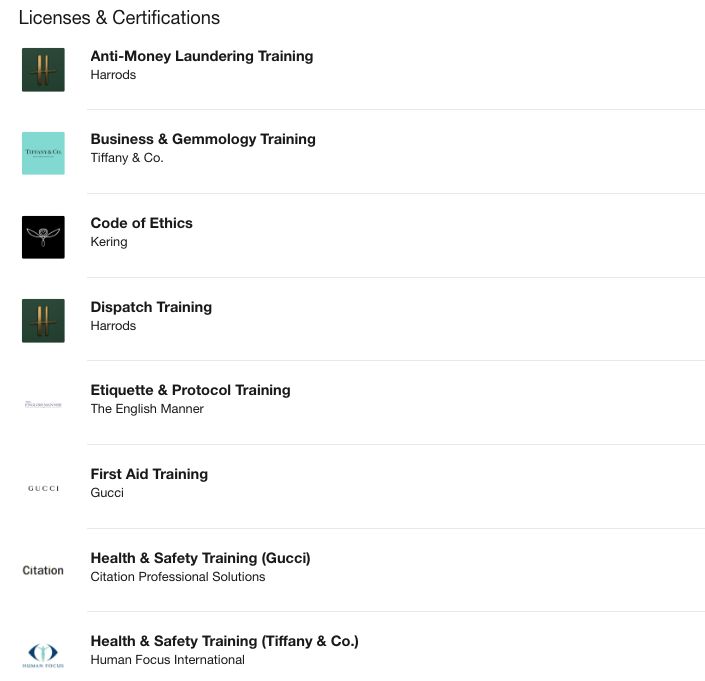 I’m beyond comprehending what any of this means, but I love it. 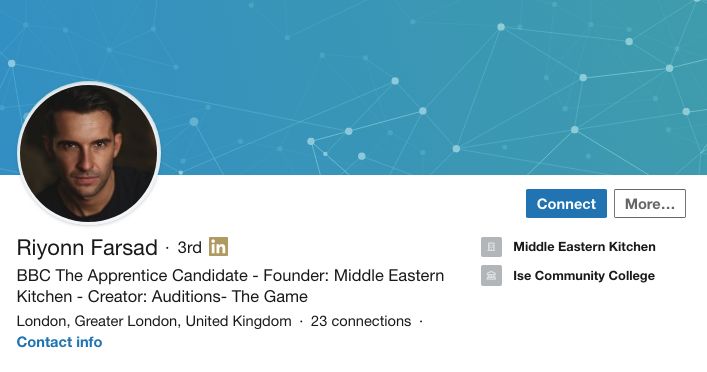 Now this is a profile picture. Not a suit in sight, just piercing eyes staring straight into your soul. Any recruitment manager would hire on the spot.

This is a genuinely nice bio, and it turns out Riyonn’s genuinely invented both a board game and a range of Middle Eastern cooking sauces.

Riyonn also sent me a LinkedIn invitation after I looked at his profile, the only contestant to have done so, and completely unaware of the very sincere write-up he’s gotten.

After accepting Riyonn’s request, I can see that him and Pamela have connected on LinkedIn. Two hustlers, each acknowledging the other.

Pamela’s profile, what with her make-up range, is something to behold. But what absolutely stuns is the fact she’s been employing other contestants since the show ended.

Yes, Lewis did some marketing work for her website and the endorsement is glowing. 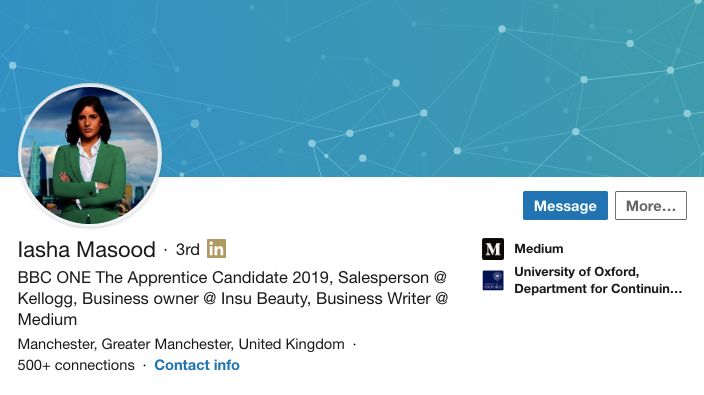 This is also a frankly unnecessary list of skills to be including but to be honest it’s LinkedIn so are we surprised here? No.

Still, he’s gone to the trouble of listing 14 bits of experience and three bits of education. As his cover pic suggests, Kenna is the founder of Beaumonde Desserts, a company he founded last year. “We are a company that specialises in creating vegan, premium, alcohol-infused ice cream. We are passionate about bringing an innovative product which uses flavours inspired by my home country of Tanzania,” he writes.

You can also reach out to him for mentoring.

From Marianne’s profile, you get the impression she doesn’t need to drone on and on.

She keeps things concise, listing the series of presumably insurance-based initialisms which make up her career with little fuss. BRM, LLC, CREW, they’re all there. 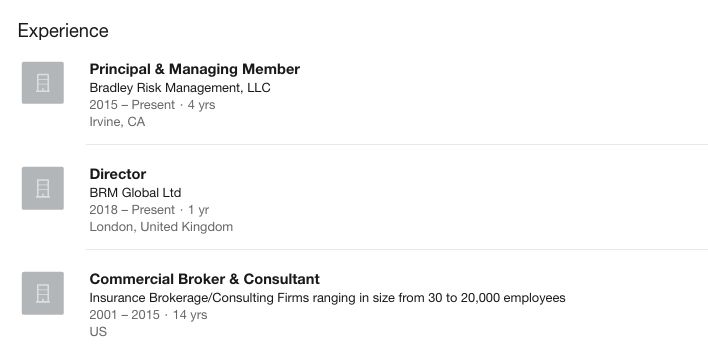 Tom’s put lots of effort into his profile, but none into getting a picture. Curious.

In the first half, he falls victim to Scarlett’s “Capping Every Word To Seem Business-Like” tendency.

But then, after a big half-time talk he recovers with a scorching essay setting out his stall as a business owner. It’s a sensational comback for the Capital 6 Investments man. 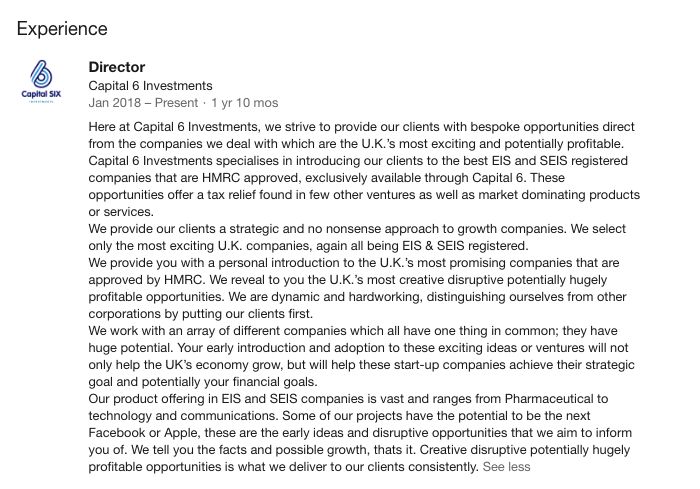 Back of the net.

• This is where all The Apprentice 2019 candidates went to uni

• Here are all the new candidates going on The Apprentice 2019