If horoscopes had their own Tinder bios, this is exactly what they would be

Every horoscope sign has a complete different dating style, especially when it comes to being on Tinder and Bumble.

A Sagittarius will keep it short and sweet online, but be a lot more chatty in person. A Pisces will wear their heart on their sleeve, telling you they want something meaningful and a Gemini can come across quite hot and cold.

But have you ever wondered, though, what your horoscope would be like if it were to try and pull? Would it aggressively swipe right? Or passively wait for all the likes to gather? I know I have.

So if horoscopes had their own Tinder bios, this is exactly what they would be like:

An Aries is a free spirit, loves travelling and isn’t scared of anything that comes their way. They’re very direct and will tell you exactly what they’re thinking. They’re a bit restless though, so good luck pinning them down. 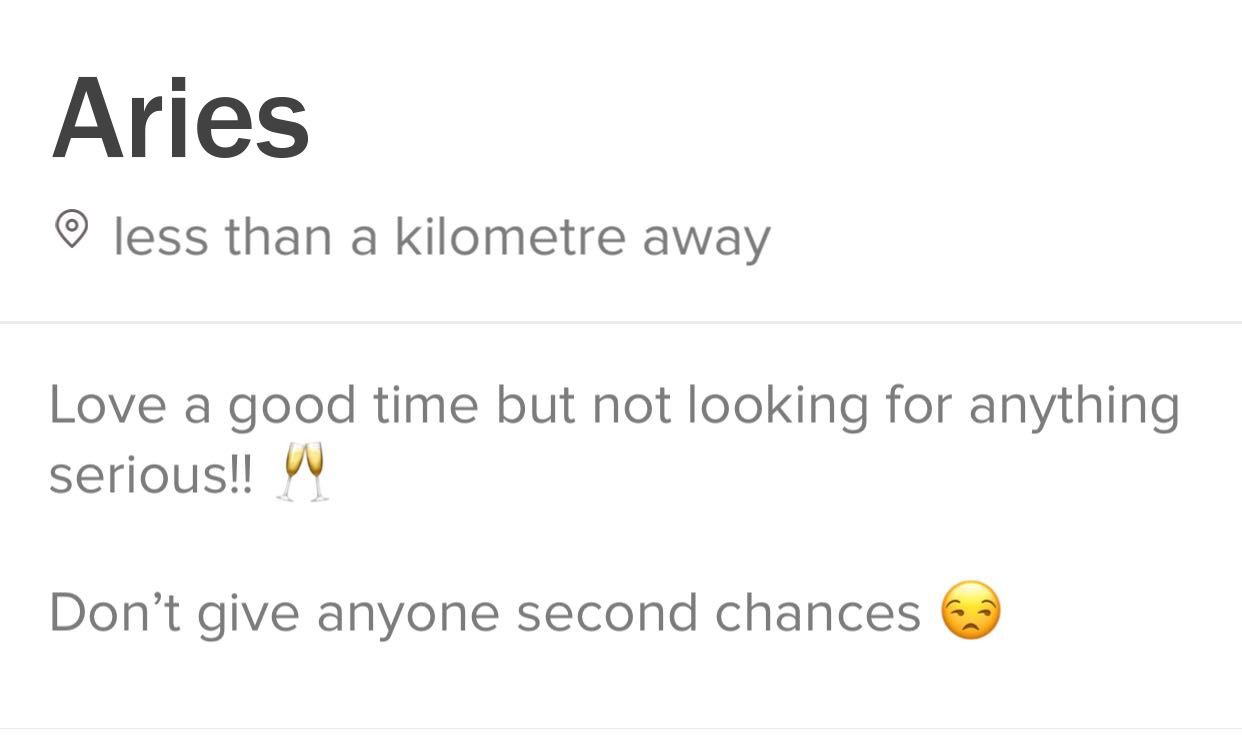 A Taurus doesn’t need over the top gestures, they’re easy to please. They appreciates the small things in life and see beauty in everything. They’re strong, practical and reliable. Very wholesome vibes. 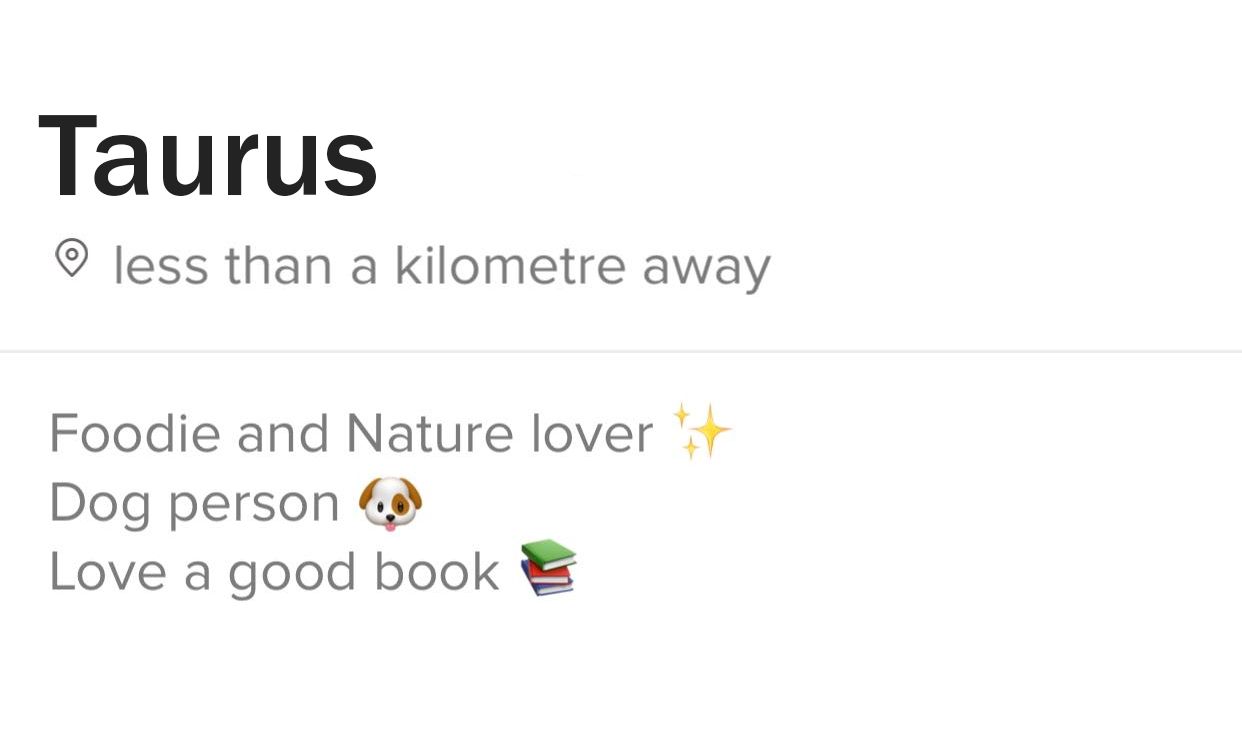 Geminis are always up for going on an adventurous date. They would agree to go rock-climbing as fast as they would say yes to an art exhibition. They’re pretty easy going and are satisfied as long as things don’t get boring or routine. Their Tinder profile will show you both sides of their personality at the same time: 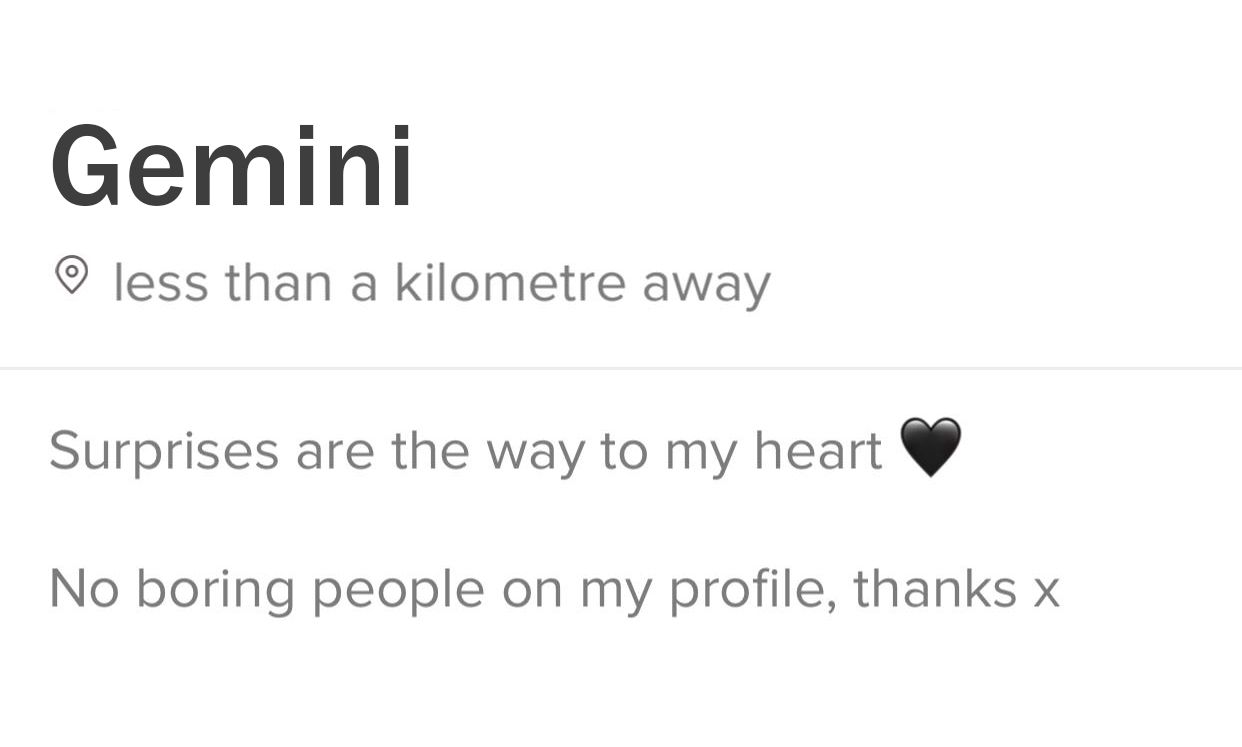 Cancer women are easy to date, they love being around people. They’re an emotional sign and are highly intelligent. They’re looking for someone with good common sense and an open mind. 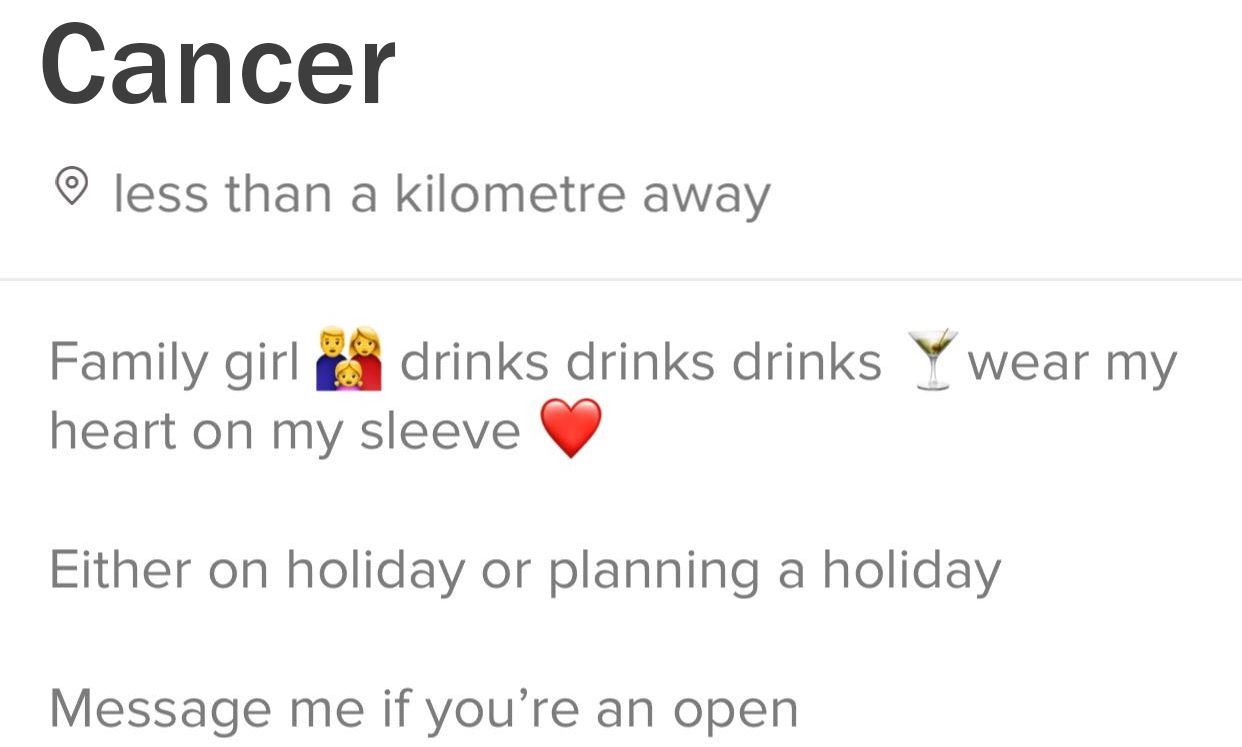 Leos are often seen as self-involved, but when they’re looking for someone, they’re pretty giving. They’re super warm and passionate, want to be treated well and can be a little high-maintenance. 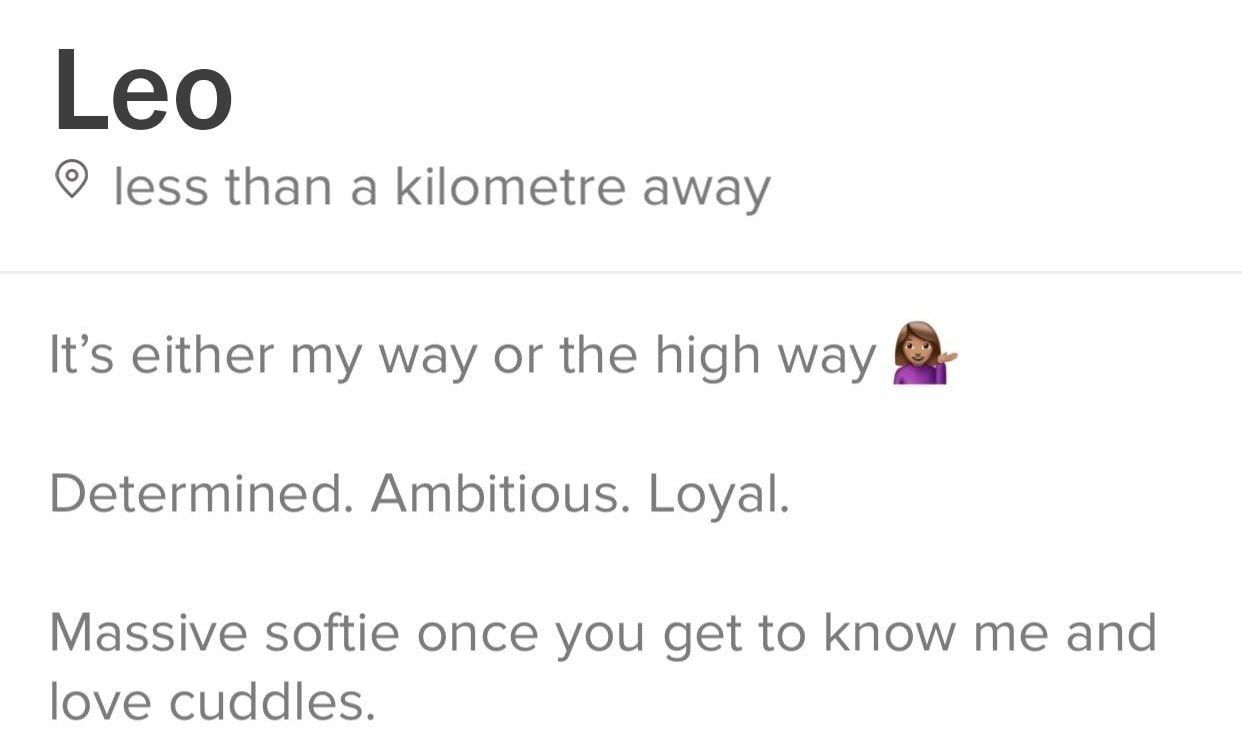 Virgos are very feminine but also quite dominant. They want to get to know people slowly and enjoy the dating routine. They also won’t take any shit from anyone. They’re pretty low-maintenance but you should treat them well, because they’ll appreciate it. 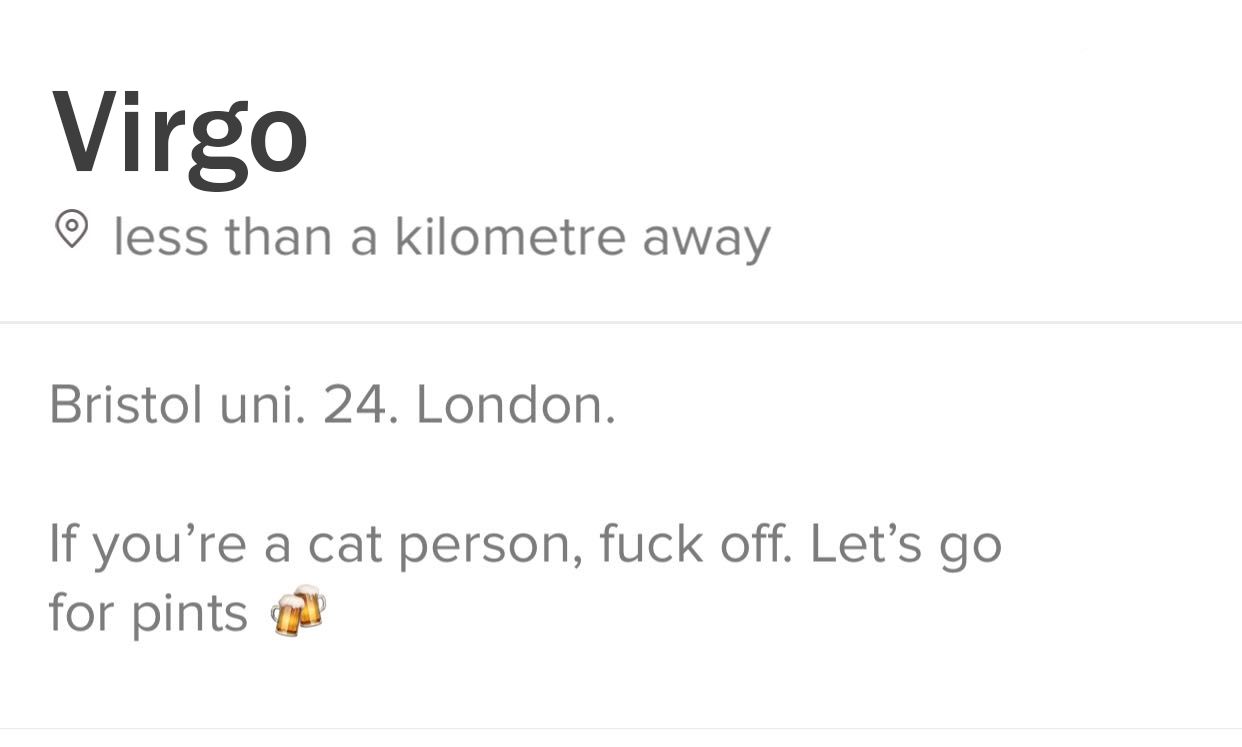 They might seem like a goodie two shoes when you first meet them, but they’re actually super kinky and probably stringing you along with five other people at the same time. They’re very social and love the outdoors. Take them on a wholesome date, they’ll appreciate it. 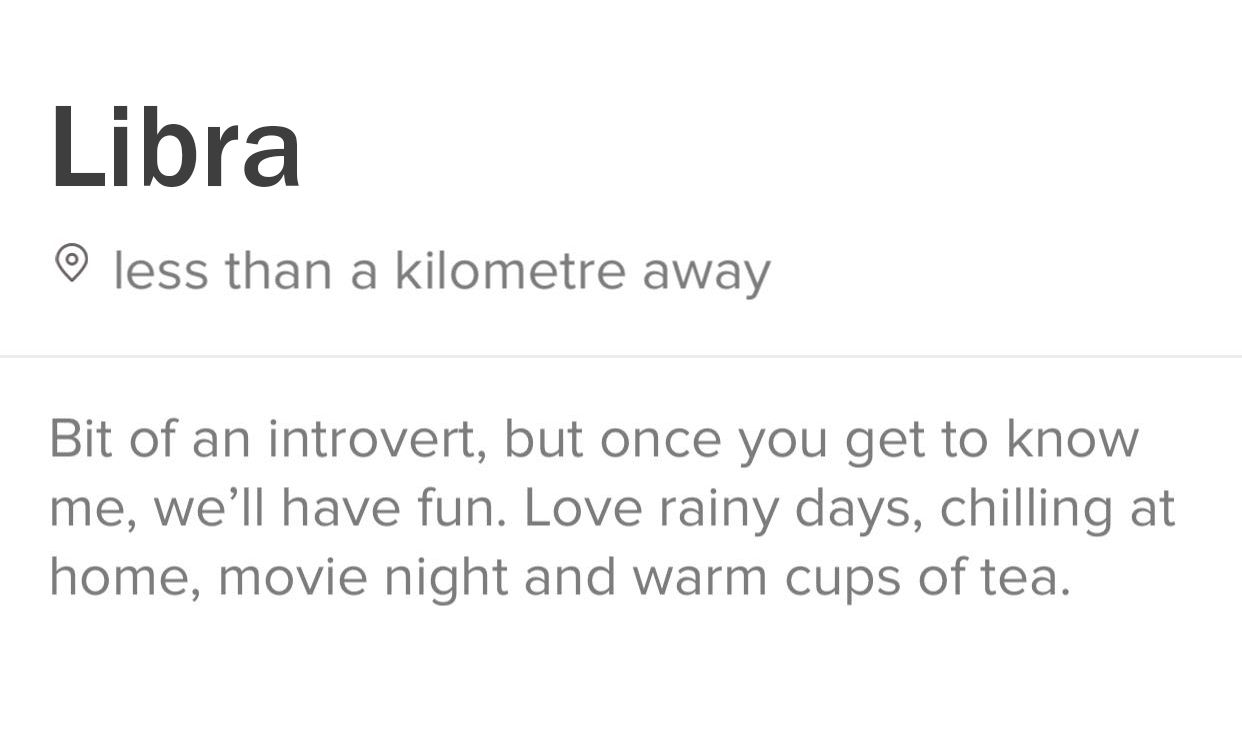 A Scorpio never looks for something serious when they’re single. All they want is a good time in bed and they’re very clear about that. Slowly but surely though, they will show their soft and sensitive side. Expect their Tinder profile to be arty and intriguing. They want adventure and a rush of adrenaline when they’re with you.

A Sagittarius is so positive, they make everyone around them happier and laugh all the time. They’re fun, kind and adventurous but sometimes a little unreliable and naive. Most of their photos will be from travelling. If you’re dating a Sagi, make sure you give them plenty of space.

A Capricorn might come across a little emotionless when you first start dating them, but it might just take them a little longer to lower their guard. Their Tinder bio is very much the “cool girl” vibe, with loads of fun group shots and candids.

An Aquarius is super independent and eccentric. They’re completely in their own world, but surprisingly practical when it comes to dating. Your first date with them would be doing something like pottery making or life drawing. Very fun and spontaneous.

A Pisces won’t shy away from showing their sensitive side on their Tinder bio. They’ve probably just got out of a relationship too. But they don’t want quick sex, they want a connection. Their perfect date will be dinner then drinks. Simple but effective. Expect to talk about your feelings, a lot. 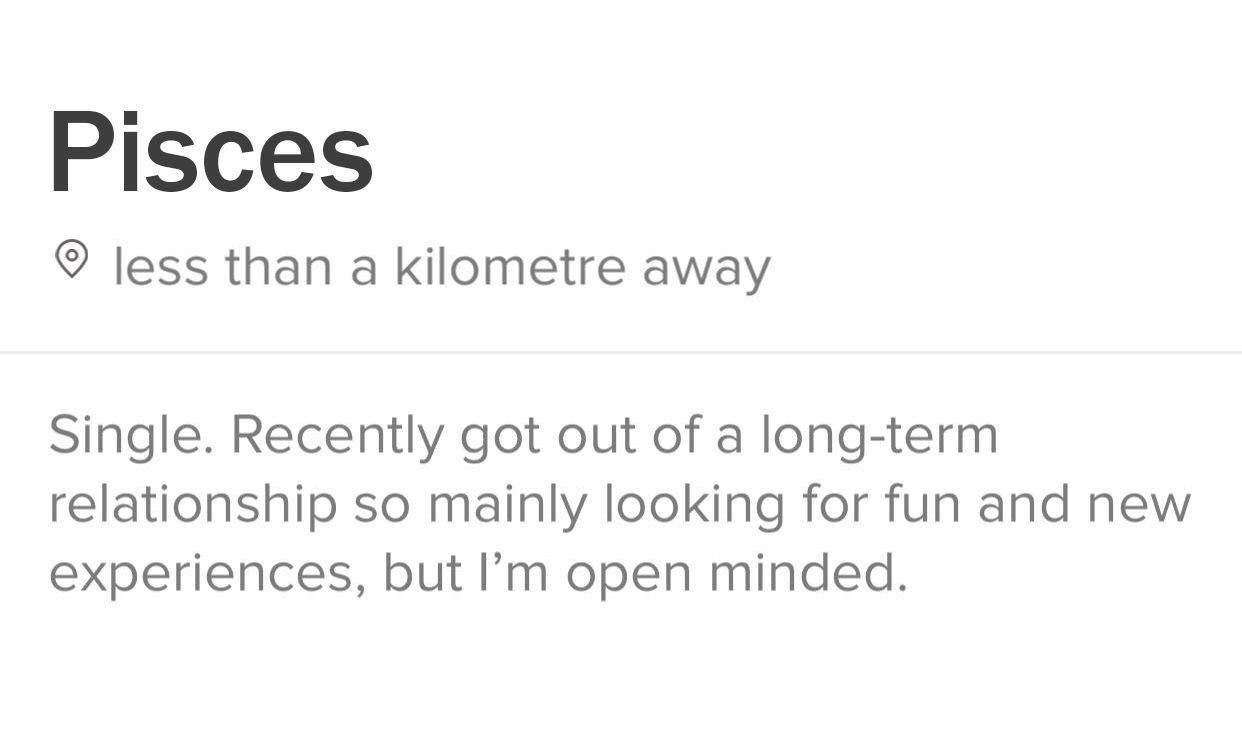 • Horoscopes can reveal what you’re like in bed, and suddenly it all makes sense

• Mercury isn’t in retrograde, but which uni should you go to according to your horoscope?