He doesn’t like being called the Ice Cream Shagger, believe it or not

If you're on Twitter, you'll know the Ice Cream Shagger. Last week Rob Huysinga posted a video of him thrusting behind a kiosk, chopping an oreo into cream, and delivering the immortal soundbite – "ice cream makes you sexy, guys". It turned him into a viral star overnight.

After being rinsed by countless Twitter users and branded "the ice cream shagger" by Vice, he's been cowed into admitting defeat, saying he deeply regrets posting the original video. People have since been pointing out that he makes ice cream for kids in children's hospital. He does not gyrate while making ice creams for children, you'll be relieved to hear.

The Tab spoke to Rob about the aftermath of his viral fame and to see if he was okay and, more importantly, if he was single.

Hi Rob, have you sold more ice cream than usual since the video?

Yeah mate it's quite weird actually. We work on the kiosk every weekend and when we were there last weekend we had hundreds of people taking photos and things like that.

I had some sleepless nights over it because I was slightly worried and was personally upset in particular with the International Women's Day video and was upset that I'd rubbed people up the wrong way. I felt that the whole video had been slightly taken out of context, but I allowed that to happen so it was my fault.

Like, obviously I got loads of abuse initially, but this week it's softened down. I've almost used it as a platform to say: "Actually, this is our story. This is who we are."

Don't you think people see it in more of a lighthearted way?

It's still quite nuts how it's all happened, like, I put that video up literally eight days ago. Within three days something like 30 million people had seen the video. This was scary – I didn't know where it was gonna go next.

Next thing I know Ellen's speaking about it – she's rinsing me and the company on her show. You never know where these things can go.

There's been a few bad ones, like the Vice article, but it comes with the territory I suppose.

How did family and friends react?

Yeah it was crazy. Even people I hardly speak to were messaging me. I was like "oh shit". I haven't shown my mum the Vice article yet that would probably upset her. Initially people asked me if I was okay.

What do you think you'd be doing if you weren't doing ice cream?

Me and my business partner have always been obsessed with entrepreneurship. The Tab has actually done articles about us before. I never think about what I'd be doing because I'm so obsessed with Pan n Ice.

Have you had a lot of girls sliding into your DMs?

In all honesty I don't check my DMs because DMs from strangers go into another inbox. A lot of the messages were pretty brutal.

Who would be your ideal dinner party guests?

What about Nelson Mandela? Or Ben and Jerry?

When I was 13, I met Richard Branson and I just thought he was such a cool guy. He's got such a playful outlook on life. The way he has fun with his business really inspires me. We have a ball pit in our office.

What are you planning for next International Women's Day

I will not be producing content similar to last week. When I put that original video up I didn't even think. I didn't mean to direct the "ice cream makes you sexy" quote at women. I hold my hands up to that now. It was wrong. 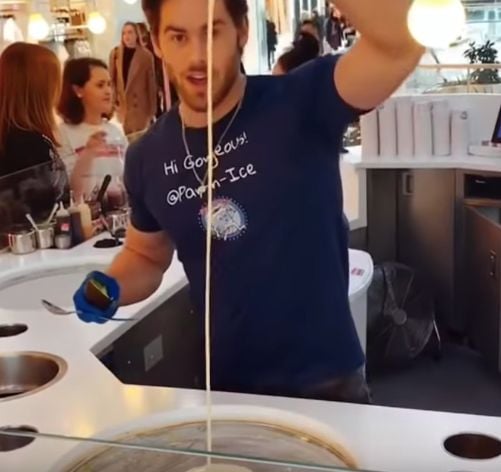