This is what all the Casa Amor lot do, according to their LinkedIns

Impress your friends at dinner parties with this trivia

As the Casa Amor lot walk around the villa looking like the product of you trying to recreate the original cast on The Sims, acting upon motivations you can scarcely make sense of, it feels like there's something you don't quite get about them.

The problem is – to paraphrase Atticus Finch, the steadfast lawyer from To Kill A Mockingbird – you never really understand a person until you consider things from their point of view, until you climb inside of their LinkedIn and scroll around a bit.

After doing that for the original islanders, we really got to know them.

So that's what the deal is here. We've had a rummage around the LinkedIn profiles of the newbies in the Love Island villa, and this is what we've found.

Grace was pretty fun, and probably a little hard done by to get kicked out as the public's least favourite. If we didn't learn that much about her from her fleeting time in the villa, hopefully her LinkedIn provides more juicy morsels of info. 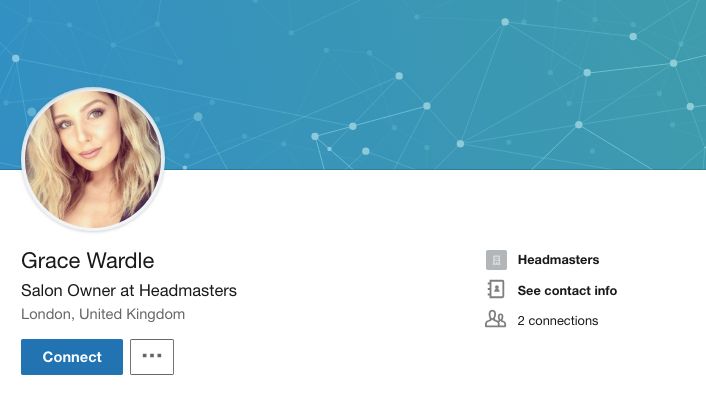 Ok, so her LinkedIn is pretty sparse. She's Salon Owner at the Headmasters franchise in Crystal Palace. According to their website, you've got to stump up at least £40,000 for the privilege.

Marbella with the @thekingsclubuk just before I jumped on the plane heading for the Love Island Villa. #loveisland

Ignoring the fact that he looks like George Michael and Rylan ran at each other very fast in that pic above, Dean's LinkedIn is top notch.

When he's not partying in sleepy Clitheroe, Dean's a salesman for Volkswagen. Between cold calling, looking after clients, and managing accounts, he's building himself up, working up the sales ladder.

It's just a shame his three endorsements for face-to-face sales didn't translate into coupling up. 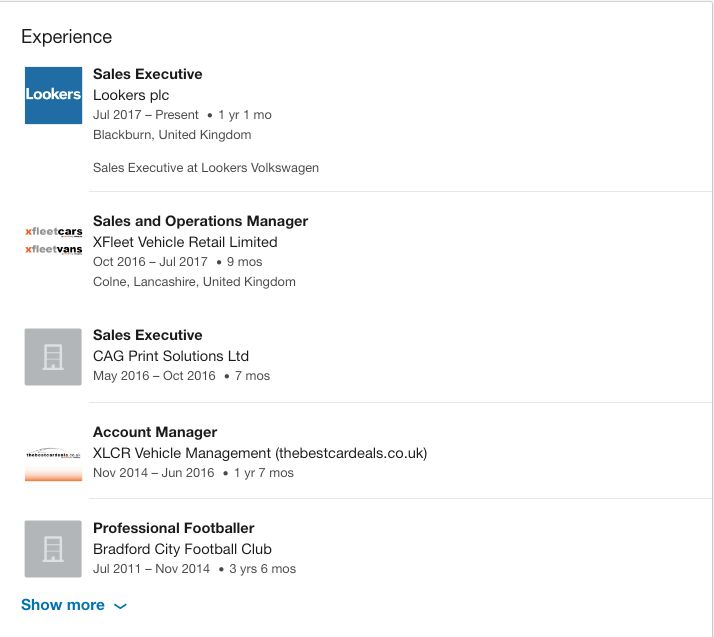 Sales is cool, but being a professional footballer is definitely cooler. Being on Fifa is, you'd think, also cool. Dean's 51 rating on Fifa 13? Less cool, but hardly a shock given he never broke through to Bradford's first team.

Heart-wrenchingly, he didn't make it out of Casa Amor, so we'll never see him put his stats to the test: 20 finishing, 28 vision, 46 strength, and 71 agility.

No results for Kaz on LinkedIn. But we interviewed her brother. He's one of the nice YouTubers.

To give a greatest hits of Kaz's CV: She did Kem's make-up after last year's series, has worked on a Stormzy video, and on Chris and Kem's Little Bit Leave It video. Beats your Saturday shifts at Argos and predicted 2.1.

Right now, the nation is obsessed with Jordan. He's a safe pair of hands, humble as hell, and willing to put himself on the line.

Shit, that's Jordan Pickford. Love Island's Jordan didn't make it out of Casa Amore.. If only his LinkedIn could help him put himself out there a bit more. 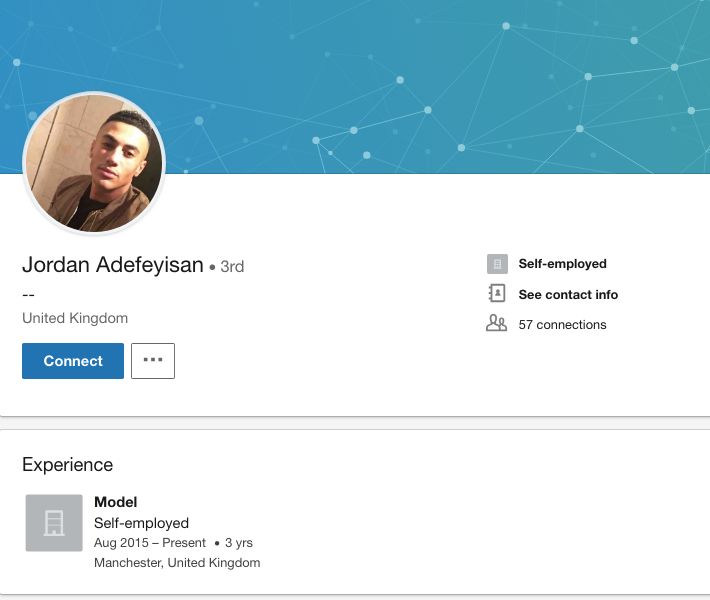 If you need it translated, "Model (self-employed)" is like putting "University of Life (School of Hard Knocks)" as your education on Facebook.

Get some sleep guys, less than 24 hours until you get to see this beautiful face again!! @loveisland #loveisland

Finding this one was a bit hard. There are loads of Charlie Brakes on LinkedIn. Then it clicked that he's totally the kind of gimp to use Charles in any professional context despite his mates in the chalet calling him Charlie, and I found him straight away. 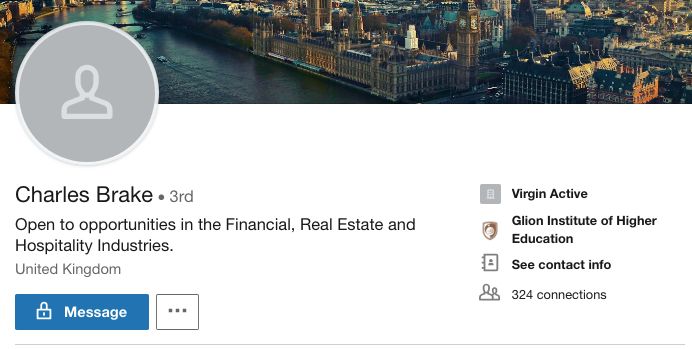 Lads, it's the goldmine. Charlie Brake's LinkedIn doesn't even need the gently rinsing commentary of the others. Just fucking read it.

"Business has always been at the forefront of family life. My Grandfather has been a huge inspiration to me. He, with his 3 brothers created an international food distribution company (Brake Brothers), which is now seen up and down the UK and parts of France. I have been exposed to the fundamentals of what it takes to run a successful business; hard-work, drive, determination, stamina and a will to succeed.

"I am outgoing and confident, well organised and able to work as part of a team or alone. I enjoy being challenged in a competitive sales driven environment, where targets are part of the daily routine. I am calm under pressure, capable, personable and reliable.

"I genuinely believe I am friendly and approachable, as well as hard working and motivated.

"In addition to this, I believe that working with those from different cultures and backgrounds would be fundamental for well-rounded personal development.

"I am highly competent at skiing, having been fortunate to start when I was 5 years old. I am an avid golfer and member at Royal Cinque Ports Golf club, Deal."

"I am interested in style and take pride in my appearance at all times."

There are eight different things on his LinkedIn. These Including, but are not limited to: a plumbing NVQ, personal trainer qualifications, his gap year, intensive cookery school, and working in a ski bar.

Charlie Brake. I am broken.

Who’s sam taking under his wing tonight? Tune in at 9pm on @itv2 to find out! #bigballs #loveisland #recoupling

Poor Sam has been mocked online for those two little uneven things at the bottom of his forehead. Luckily for him, eyebrowsed his LinkedIn page and found a few other things to lightly mock.

This is what LinkedIn was made for – promoting your Dubai brunch booking app after you sack off becoming a personal trainer. 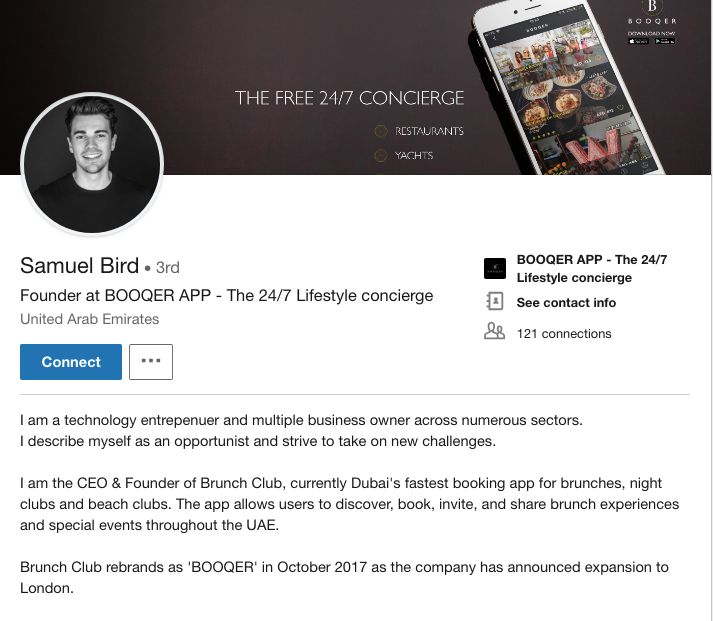 BOOQER. Sam, mate, try not to make your app sounding like a kid off Recess shouting "booger" across the playground.

Statistically, the public just weren't a fan of Frankie. Going out on a limb, I genuinely reckon we're gonna miss Frankie. Not sure why, it's just a hunch right now. Perhaps it's his LinkedIn. 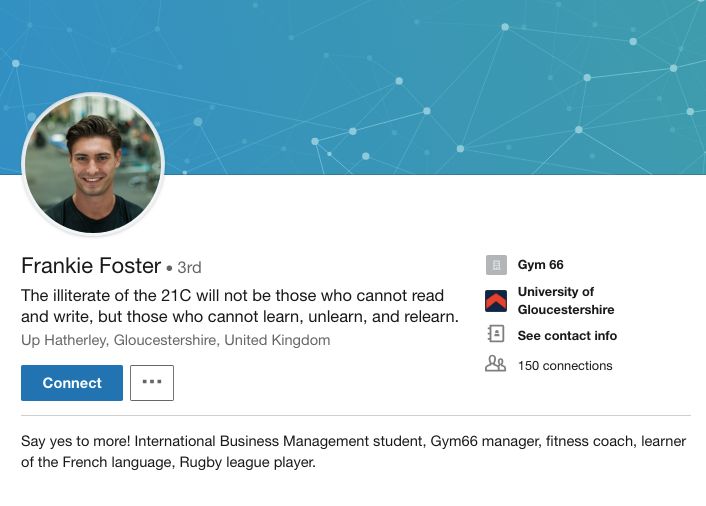 Having a quote like: "The illiterate of the 21C will not be those who cannot read and write, but those who cannot learn, unlearn, and relearn" as your bio is the LinkedIn equivalent of having "Live, Laugh, Love" hanging above your door. Not sure how this quote can be sanded down to fit Frankie's being booted unceremoniously off the show.

• Were we WRONG about Georgia all along? Do we need a video replay of her intentions? Who can we trust?