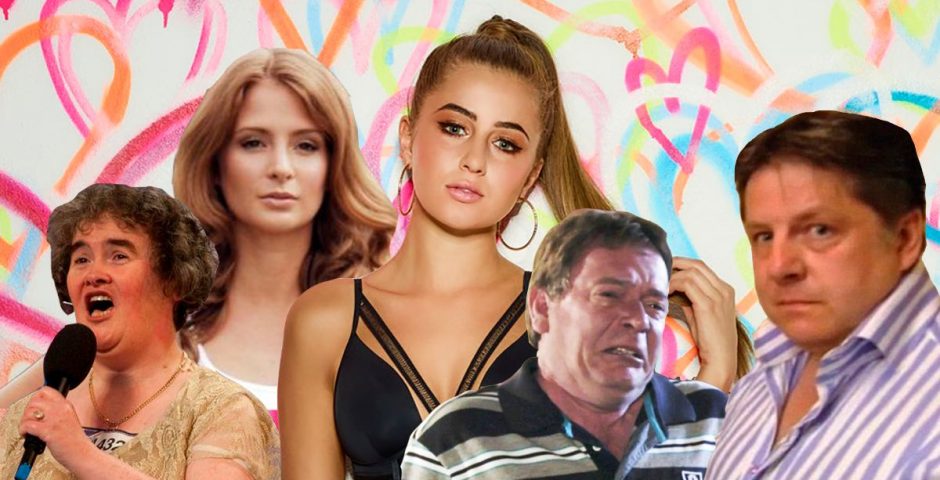 In the last 10 years, we've had Big Brother, Britain's Got Talent, The X Factor and a whole heap of other British TV shows that came and went. But last night, something changed. 3.7 million people watched an extended episode of Love Island on ITV2. Millions of people sat on the edges of their seats, witnessing the female empowerment, the loyalties broken and made, the greatest love story of the modern era unfold. It was, quite simply, the best piece of television to ever grace our screens and I'm going to tell you why.

There were reunions, broken hearts, slithery snakes sliding their way back into our lovely villa in their new serpentine couples, dramatic backing music, Caroline Flack was even there. And we all know that means trouble of the highest order.

Now sit down, children it's time to look back at what actually fucking happened in that 56 minutes (one hour 20 mins with ad breaks, fuck you ITV2) of MADNESS last night. Because I actually need a minute to digest the content.

All day we were left hanging, wondering if Dani would ever get over the prospect of her boyfriend being "wrapped around" his ex in Casa Amor. Whether she would panic and pick to couple up with someone else just in case. But then he returned, alone, to be with her. And millions of people sighed with relief as the possibility that love could still exist was confirmed.

Zara had literally been gone for 0.0001 seconds before Adam hopped into bed with another girl, knowing full well she'd be watching at home! The cheek, honestly. The looks the girls exchanged when he walked in with Darylle were priceless.

Samira and Dani shared a look that touched every woman's heart 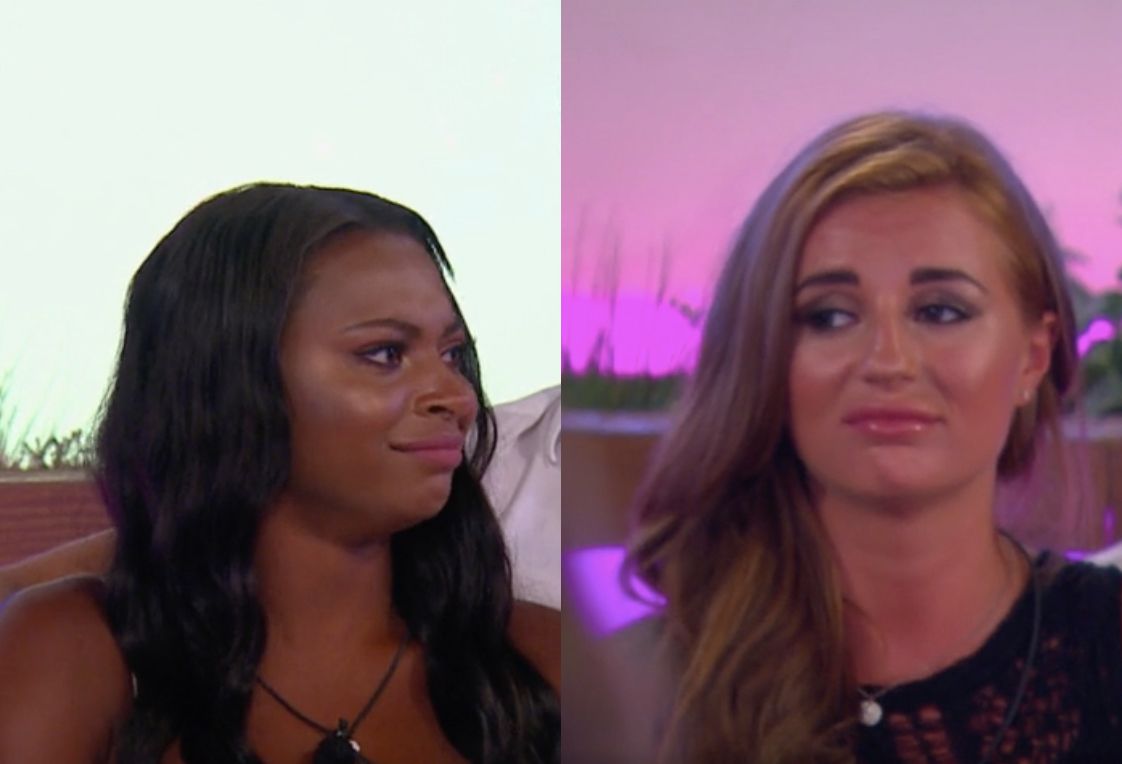 We all know the feeling, gals

Alex ditched cute Charlie for less cute Grace and referred to her as a "sub". And the uproar began. The nations favourite doctor is now a hated, sexist, objectifying involuntary celibate who no one can stand. Boy bye.

This is what happens! When you fuck over a lovely and committed lady! You get fucked over yourself! Take notes, boys!!!! Megan full on snaked Wes last night and left him single despite him leaving Laura purely to be with her last week. The betrayal is real.

Now she's getting hers with new man, Jack, Laura was able to sit and watch Wes' world burn around him as he sat by the fire pit a single man. But she didn't smirk à la Megan, she remained calm in the knowledge that he too got his.

And then this happened. The nation's sweetheart was left single after she stayed true to Josh. Although she could have been embarrassed, she could have got upset, she kept her composure better than any of us ever could. She turned away for a second, took a breath, and turned to face Josh and Kazimir to tell them that she had been loyal to him. And my god did he feel the weight of her words.

So, Love Island watcher and all round telly viewer, I challenge you to find me a television moment more epic, more intense, more drama-fuelled than what 3.7 million of us witnessed yesterday evening. I'll wait.

To aid you in the process, I've whipped up a few of the most epic TV moments in HISTORY to prove Love Island quite frankly tops them all.

1. When Peter Marsh from Come Dine with Me absolutely lost it

Who is angry Peter Marsh?

Never ever forget Peter Marsh, the greatest Come Dine With Me contestant of all time, lose it at Jane

Peter Marsh came in last place when he competed on the classic day time Channel 4 show, Come Dine with Me. He was NOT happy. To add to the insult of being given the worst collective scores, he had to find out in his own home and reveal the answer to the nation.

Upon revealing Jane has won, he states: "Enjoy the money, I hope it makes you very happy. Dear Lord, what a sad little life, Jane." Jane hangs her head in shame/embarrassment. He continues, "You ruined my night completely so you could have the money. But I hope now you spend it on getting some lessons in grace and decorum. Because", and get this, he says, "YOU HAVE ALL THE GRACE OF A REVERSING DUMP TRUCK WITHOUT ANY TYRES ON."

I mean isn't that just TV gold? Could anything on our television screens ever compare? Yes, it was nothing on last night.

2. When Susan Boyle shocked the nation with her angelic voice on BGT

Susan Boyle broke into our world in 2009 when she auditioned for Britain's Got Talent on ITV. She sang "I Dreamed a Dream" and absolutely blew the British public away. Despite what Simon Cowell says, we absolutely did not see this coming. She was 47 and never been kissed for crying out loud!!

Yes, this clip makes me cry every time. But so did last night as soon as I saw Jack walk back into that villa by himself. So much more.

3. The worst interview that ever happened on The Apprentice

So this guy, he walks into his interview to be on The Apprentice. He's being asked about what he's pitching to Lord Sugar. In comes Claude with all the praise – he really is giving this guy some downright lovely feedback – and we're all watching at home like "aw, this guy's gonna do so well what a sweetie".

Oh, what's that, Claude? I'm sorry WHAT? You've gone from pleasure filled to suddenly it's a bloody disgrace? His face has DROPPED. My face has also dropped and the whole country doesn't know what's up anymore.

To be fair, it was a bloody disgrace. But NOTHING COMPARED TO WHAT JOSH DID TO GEORGIA LAST NIGHT.

4. When Millie slaps Spencer on Made in Chelsea for cheating on Louise

This is an absolute vintage MiC moment, with tense music, poorly delivered lines in plummy accents and a very upset Louise. What more could you want? Millie and Rosie storm in, full of newfound knowledge that Spencer has (shock) cheated on his girlfriend Louise, and they want him to own up right in front of her.

What begins as a fumbled and awkward encounter which, to be honest, sounds really scripted but poorly delivered, suddenly turns absolutely wild. Millie looks at Louise and cannot bare it. She screams, "THIS IS WHAT YOU'VE FUCKING DONE TO HER" as she slaps him right in the chops.

Bloody hell, that was good telly. But it is still absolutely nothing compared to last night. Nothing I say!

5. Phil comforting Ian when he has a full on breakdown on Eastenders

Ian Beale has literally been in Eastenders since day dot. He's been through it all on the show: an attempted suicide, an attempted murder, five marriages, homelessness and basically losing his whole family. This is when he hits absolute rock bottom after his daughter Lucy is murdered.

It's possibly one of the most heart-wrenching pieces of British television ever broadcast. Or was it? You think that was sad? That's literally what I was like on the sofa last night – inconsolable after seeing our girl G get her heart broken like that. Lucy's murder is nothing in comparison.

This clip of England winning the world cup in 1966 will soon become obsolete in just under two weeks when we get a colour version. But even then. Even when football comes home next Sunday. Even that won't be as emotional, as dramatic, as much of an impact in this country as last night's episode of Love Island. And there's nothing you can say to change my mind.

WOULD YOU JUST WATCH THIS FOR CYRING OUT LOUD

• Love Island Gossip Column: Georgia and Wes share a bed!!! Plus producers plan a trip for Dani and Ellie

• If the cast of Love Island were in the World Cup, here’s what the team would be