Meet Zara, Love Island’s newest girl who works in Parliament and is a 12/10

Zara, Love Island’s new girl, has a job in Parliament as a government advisor

Zara McDermott is the latest girl to appear on this series of Love Island, after the recent arrivals of Megan, Charlie and Josh, and is set to shake things up. When not in the villa, her job is a government advisor.

There's already a doctor and a solicitor amongst this year's contestants, and now we can add policy advisor for the UK government to the list. Zara has worked for the government since 2015.

But what else do we know about Zara's life before Love Island? Here's everything you need to know about the villa's latest addition. 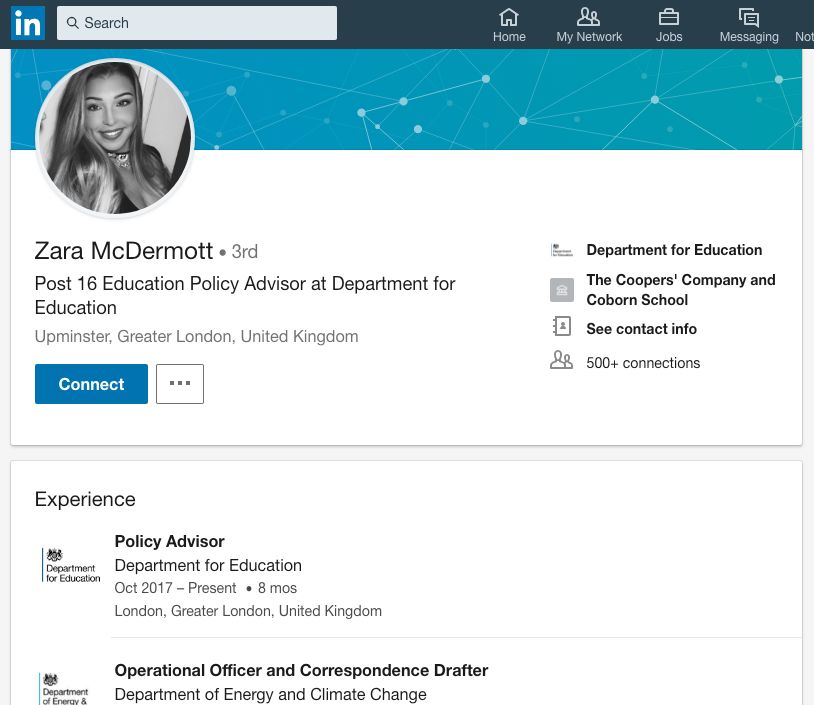 As you can see on her LinkedIn, Zara has worked for the Department for Education, currently run by Damian Hinds MP, since November 2017.

She started this new role after two years working for the Department of Energy and Climate Change, where her role was 'Operational Officer and Correspondence Drafter' – can't wait until she tries to explain exactly what that means to everyone but Alex.

Her job involved dealing with parliamentary questions (PQs), briefings for Ministers, and developing new policy on renewable heating technology, which will surely come in handy should Eyal want to launch into any more puns about things heating up in the villa.

Policy advisors such as Zara help to create policies, this more involves developing and implementing the policies, rather than actually thinking up policies, which is left more to political analysts.

View from Parliament the other day 🌞 I love my work and all of the opportunities it gives me! Watching my Ministers debate in the House of Commons was such an amazing experience

Before working for the government, Zara was a model

Going from modelling to creating policy for the UK government is a common career trajectory, and one that Zara has followed. She belonged to Sandra Reynolds Commercial Modelling Agency from January 2013 until March 2016.

As a Sagittarius, Zara is naturally charismatic and not afraid to take risks. Does this mean she won't shy away from taking the guy she wants when the Islanders recouple?

Zara has possibly the most aesthetic Instagram of all time

She currently only has 11,000 followers and can expect to add thousands, if not hundreds of thousands, more as her time on Love Island continues.

Ice creams on the beach 🍦💙 weekend away with @charlipaton

If you're Zara, you can never have too many holidays

Not sure how you can be permanently on holiday and also work for the government but hey I'm just insanely jealous.

Zara is from London and went to school in Essex

According to her LinkedIn, Zara attended The Coopers' Company and Coborn School in Upminster, on the border between London and Essex.

At A-Level she studied English Literature, Religious Studies, Media Studies and Psychology – perfect for figuring out who to couple up with or which snakes to avoid inside the villa.

She can speak two languages

have my heart it’s yours

One of these is, unsurprisingly, English, but Zara can also speak Spanish which will no doubt come in handy as the Love Island Villa is situated in Mallorca, especially on days when the cast are given a day off.