If football managers were the boys in your group, this is who they’d be

In years to come people will ask you exactly where you were the moment you found out Arsene Wenger was leaving Arsenal after 22 long years.

You know what else is 22 years old? Students. Some of them at least, and a proportion of these are male, live in uni houses with other guys and spend a lot of their times watching, playing and talking about football.

So, the question you've all been wondering, if football managers were the other boys in your group of mates, who would be who?

Eddie Howe is obviously the Strongbow Dark Fruits boy, whilst Sam Allardyce is the one who will drink pints until he can't see anymore. And Arsene Wenger? He's obviously the sad boy, getting aired by any girl he texts.

It’s the combination of his black puffer jacket, trendy specs and his perfect haircut which make him look like your classic promoter. The way he paces up and down the sideline, it wouldn’t be surprising if you saw him trying to flog some cheap tix and a drinks deal outside the Anfield before the game.

Klopp running down the touchline celebrating a goal is pretty much the same as a promoter racing down the high street to ask “HEY GUYS ARE YOU GOING OUT TONIGHT?”

Has the whole nonchalant, disinterested vibe absolutely nailed but lacks the proper equipment to actually achieve anything.

Before we get into stretching this analogy into something that kind of makes sense, can we just admit that Eddie Howe has the haircut of someone who likes Strongbow Dark Fruit.

Imagine Eddie, down the park on a hot summers day with his pals, he's not saying much, just sipping on a can of Dark Fruits. They're talking about politics, about who should be on the plane for the upcoming World Cup. Eddie remains silent, he doesn't care, he's just going to keep doing his thing. That's what makes Eddie content.

“Looking back is a healthy thing to do, because very quickly in this game you can get lost and ignore what has happened & where you have come from.

“When you look where the club has been & the journey it has been on, it is incredible."

Can you imagine anything better than going to the pub with Sam Allardyce for pints. Not a pint, pints.

He wouldn’t drop a message down the group chat at around 3pm while you’re all sweating it out in the lib asking if anyone fancies a pint. He wants to go full-on pinting. He wants to drink to the point where you have to call the AA to attach a winch and give him a tow home.

He knows beer is too heavy for pres. That’s why Big Sam brings a bottle of wine when he rolls up at your house – Dino, Kumala, anything on offer at Tescos really. He grasps the neck of the bottle with a sweaty hand and chugs it down. 1-0.

The overly political/Brexity one – Sean Dyche

Absolutely no nonsense. None of these European divers. There ya go. Straight up to Sam Vokes. Out of the single market. Into the Europa League. A big fan of blue passport tackles.

Sean Dyche is the uni Brexiteer – opting for a pretty bone-headed rationale to his way of doing things, the way they've always been done. But in reality, he knows a lot more about what's going on than you do.

Quite dour but poetic, constantly toeing the line between being charming and sinister.

Absolutely loves a turtleneck and is not actually bald but has just shaved off his hair for a play he’s doing. Luckily, he's so damn handsome he gets away with it. 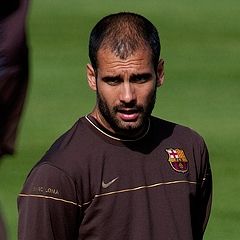 This is very much an aesthetic

He will constantly try to tell you about how hard his life has been, writer's block, tales of unrequited love, and the time he had to leave Bayern Munich because they would only give him a £70m budget. Poor bloke.

This one was close, though, as young Arsene Wenger has A LOT of the English Lit Boys about him, those round glasses, but Arsene is clearly another stereotype in your friendship group.

Up until a few days ago, Arsene Wenger had been experiencing the isolation the sad boy feels when he’s left on read by just about any girl he messages. But now he's out of a job this summer, an air of calmness flows over him, like when the sad boy's muse eventually tells him to fuck off and stop texting her.

The uni sad boy thinks #WengerOut is a really funny post-ironic thing to drop into conversation. You know the guy, the one who receives an unreal amount of pretty harsh banter any time he enters the lounge or pipes up in the group chat. Arsene knows the pain, turning up to work every week, trying his damnedest to succeed, but still having everyone protest against him.

I’m really gonna miss these post-match interviews . Especially when he looks directly at the camera . One Arsene Wenger ❤️? pic.twitter.com/LK2LgD6OPf

Every sad boy will look back on their second year house wistfully, as though it was all pure good times. They’ll look back to that time they were unbeatable as a squad. Funny how they’ll choose to gloss over all the squabbling, the chronic lack of money.

Honourable mentions for this category must also go to: Gareth Southgate, David Moyes and Steve McLaren.

Just before he goes into his press conferences, Jose has a massive puff on an even more massive doob. This is what gives him the 'big thoughts' required to rant as often as he does. Going on about qausi-philosophical concepts like football heritage for twelve whole minutes.

He lives in a hotel in Manchester because he can't get his shit together and almost certainly spends his evenings with Netflix on, banging out Rick and Morty. Is so paranoid he's convinced he's some sort of "special one".

The One Who Never Goes Out – Javi Gracia

Everyone has that one flatmate that you're not sure actually exists. He sleeps all day, never going to lectures and then never goes on nights out because he claims he's too tired. Similarly, does Javi Gracia actually exist? I honestly don't think you can prove he does.

Relentless weird professionalism to disguise a lack of substance. Very happy to do weird work trips to prove himself, whether it’s going to Russia to manage Zenit, or Deloitte sending him to live in a regional hotel for three months whilst he synergises the heck out of a failing bookshop.

Was never a professional footballer – has a relentlessly managerial approach to managing things. Very New Labour, very pints with the boys from the office outside a bustling city pub.

Will eventually sack all the career stuff off after realising it doesn't make him happy and decide to become a rally driver instead.

That dance. That dance. 2am in Pryzm and he’s got his best aftershave on, three messages sent out on Tinder. Sorted.

Everyone has that mate who will always get into a scrap in the club because someone 'shoved' him, when really it's the reality of hundreds of people dancing in a cramped space.

He will be completely unreasonable about the most innocuous things. Borrowed a pinch of his milk? Don't bother coming home for a few days until they've calmed down.