Dear Jennifer Lawrence, please can you stop pretending to be normal now

We get it, you love pizza

Jennifer Lawrence isn’t normal. I’ve been saying it for years. She's not quirky, she's not gross, and I will literally start bashing my head against the wall if I have to watch her fall over one more time.

Evidence came with her admission in an interview that she is rude to members of the public when she wants to avoid taking selfies or signing autographs. The cool girl mask has slipped.

jennifer lawrence being rude to her fans as a "defense mechanism" is fucking bullshit.. there is a way to tell people to back off w/o having to be a total asshole about it. hollywood is made up of entitled scumbags who dont even appreciate the ppl who support them

Jennifer Lawrence claiming to be rude to her fans because it's her only defense against people coming up to her is a really flimsy excuse.

Here's all the mind-numbing crap she's pulled since she rose to fame – all of which can now be revealed to be a total con.

No fall in the history of falls has ever looked like this. For most people your chin wrinkles into your neck, your hair sticks you your lip gloss, your arms manically flap. See Gemma Collins for inspo Jennifer.

I'm not the only one that's confused. Jared Leto started a conspiracy theory that the fall was staged.

I agree, Jennifer totally flew in a fall choreographer from Milan to execute the correct balance between face palming weirdo and goddess with Dior cheekbones.

This isn't even the first time she's stacked it, like please wear flats next time you walk the red carpet

If you are trying to be normal Jennifer, no one normal falls this much, I haven't hit the pavement since last September.

How do people make actual news bulletins out of this shit?

I would go on, there are many more underwhelming face plants, but I'm guessing you are a bit bored by now.

"I kept thinking, Cakewalk, cakewalk, cakewalk. I thought, Why is 'cakewalk' stuck in my head? And then, as I started to walk up the stairs and the fabric from my dress tucked under my feet, I realised my stylist had told me, 'Kick, walk, kick, walk.' You are supposed to kick the dress out while you walk, and I totally forgot because I was thinking about cake! And that's why I fell."

Even a stoned Mary Berry wouldn't think about cake this much. Imagine being in solitary confinement where the soundtrack to this video was played on a loop everyday, all day. Imagine.

If you cba hearing Jennifer discuss how she wishes she was wearing sweatpants and how hungover she is, skip to 3:20.

Like are you on The Real Housewives of Beverley Hills? I thought only people on reality television were mean enough to swill drinks on people.

Then there was that time she interrupted a reporter whose second language is English to tell him off for reading questions off his phone. She sounds like one of those obnoxious cafe signs that are like "put the phone away, embrace life". Making him turn into this flustered mess when he was trying to ask a nice question about her film.

Why is she always trying to prove how gross she is?

She's a human being guys! A human being who loves going about pissing, puking and farting. Personally, I am done with this Dic and Dom in the Bungalow style toilet humour. Passing air through your arsehole is a normal bodily function. In her recent interview with Kim K it takes just 3 minutes for her to mention farting. 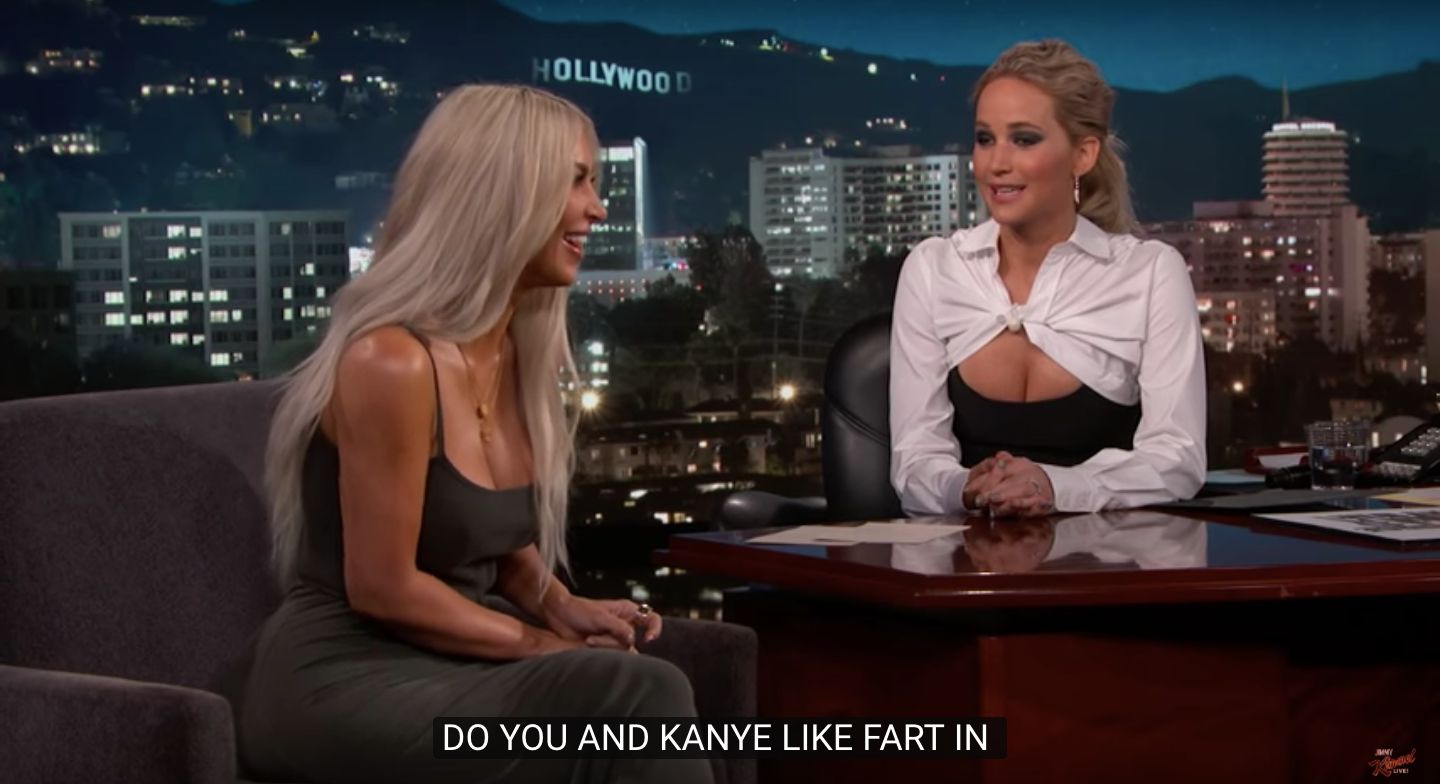 She also excited everyone when she revealed that she pisses in sinks. I mean this is just isn't controversial is it? After a glass of Rosé most women end up dropping their knickers on the nearest grass verge and they don't get a round of applause, they get denied entry to nightclubs by men in high viz.

You know the type, they introduce themselves like "hi nice to meet you, watch out because I am a bit full on", "I am totally wild", wait until you go on a night out with me" before acting in a totally acceptable manner. Well this is Jennifer Lawrence. I don't see her popping blackheads on the Jimmy Kimmel sofa, or blowing her nose on her t-shirt. As Ariana Grande fantastically demonstrates it:

She's always blabbing on about how much junk food she eats, like all the time

No one cares, most people eat a lot, three meals a day in fact. Until liquefied chicken mayos are chugging into your body through a drip, I'm not impressed.

I actually nearly vommed when she says: "I need to stop going on about food so much… I just signed a chipotle bag and a box of Cheerios – finally they get me".

When she's not talking about pizza, Jennifer's complaining about how hungry she is

New drinking game: watch an interview with Jennifer Lawrence and drink every time she mentions her appetite. It's like, you are a celebrity, just whisper "beef" and someone with a clipboard will bring you a roast dinner.

No one can guzzle through MSG soaked Chinese takeaways three times a day and still be a under size 12. This "I love McDonalds" act doesn't make me think Jennifer's real, it makes me wonder why I can't eat loads without without getting belly rolls. Guaranteed she's low key eating spindly green leaves and weird supplement powders ordered on Amazon Prime.

Who makes this much noise when eating a Mento? She's literally dying for the interviewer to comment on it

But that noise. She's like that person you have to move away from in the library because you can hear them slurping a tuna mayo around their gums. Like ASMR but with added spit.

Tell me again how down to Earth you are when you will comfortably throw beer on a fan after he asks for a selfie, or live in an 8 million pound gated community with doric pillars and all white everything. I'd take Mariah not being able to sleep without her Apple TV on, or Kim K's placenta ice cubes – at least they're honest about their own cash fuelled ridiculousness.