She's constantly sending selfies in H&M changing rooms, wearing 3 different types of near identical flared joggers, making you painstakingly distinguish which pair she should buy, "I like the zipper on the last one". Whatever you say she'll do the exact opposite.

She asks everyone weeks before a night out, "what should I wear?" you suggest the iconic, "jeans and a nice top". Other questions include, "heels?" "false eyelashes?" "coat?" "should I wear tights?"

Then she's screen shotting Tinder asking if she should swipe right for market researcher Paul or pestering everyone for an ASOS student discount code. 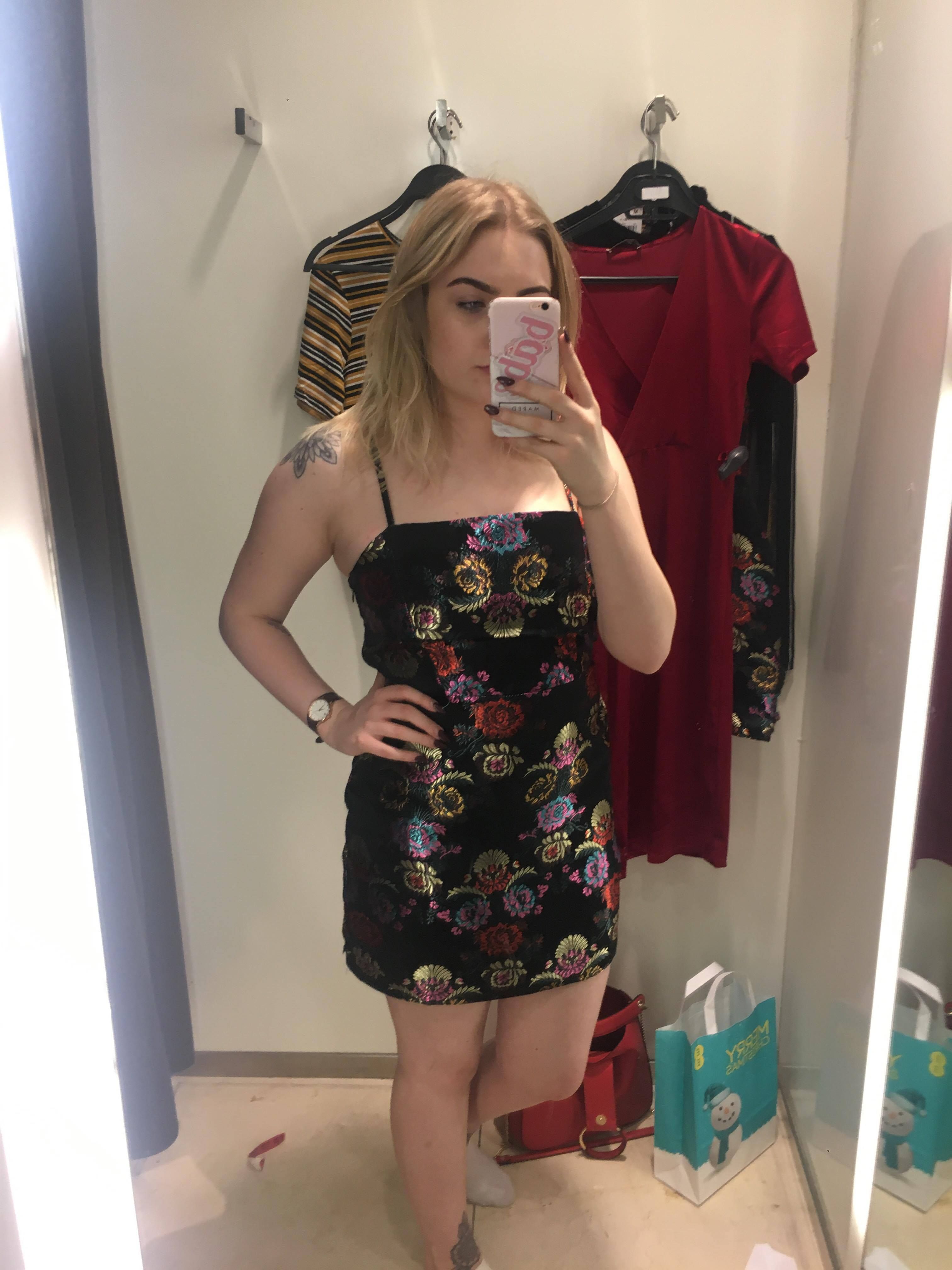 She's also a massive vagplainer. Everything you've done, she's done it better, if your boyfriend tied you up in ankle braces, she was on the floor being pissed on by 7 Ryan Gosling lookalikes.

"omg guessss who just sent me this"

The one who's always with her boyfriend 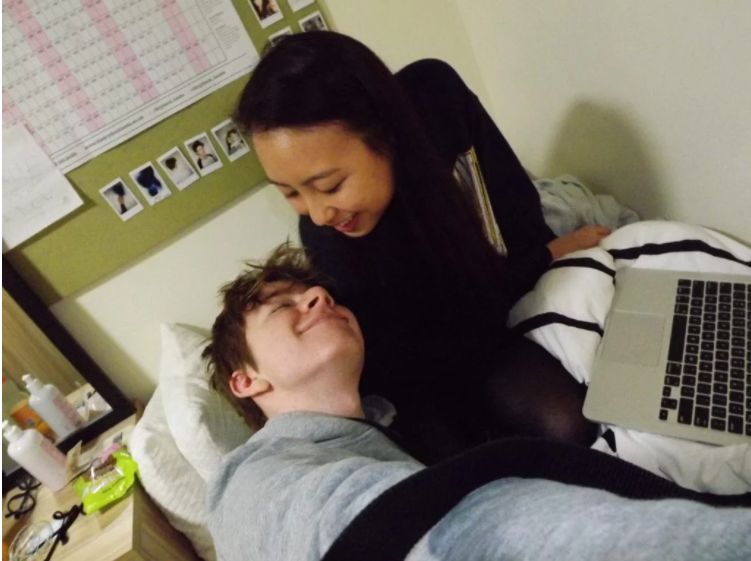 Always bails because she is literally superglued to her boyfriend. Sometimes she commits the heinous crime of letting him into the coven.

Why has she done this? If he scrolls up he'll see that picture of my wobbly landing strip or me describing snogging his mate, "his tongue was like a wet dull slug."

The straight up bitch

Mistakes being 'honest' with being 'brutal'. I don't need to know that the cyst on my ear looks like a bit of sweetcorn. "If I have something to say I'll say it to your face" is not just a reality TV intro, it's also this bitches life motto.

Always there for you when someone's pissing you off and you need to vent. 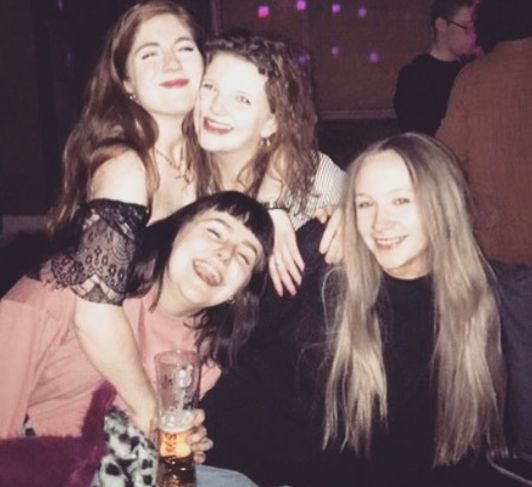 Thinks it's socially acceptable to reply messages with 'K.' or 'lol', even when it was a question. 'Haha' never indicates an actual laugh but more of a sarcastic cackle.

When people are beefing, e.g. "I can't believe you guys left in the UBER without me? I was in the smoking area waiting". Rather than getting involved she'll 'like' or react with crying/laughing emojis to comments, veiling hate behind confusing GIFs of Paris Hilton.

She has others fight her wars for her whilst she lays back, runs a hot bubble bath, wacks out the popcorn and enjoys the show. 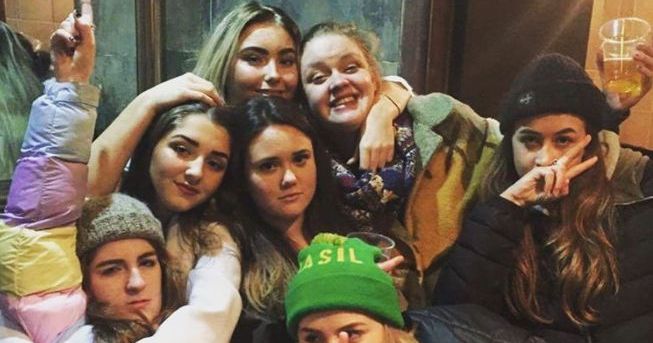 Gemma Collins in training, this girl follows the internets best pages, from existentialist dread content @ripannanicolesmith or @gothshakira's de-colonising dank memes. They're so good you paste them onto your home friends' group chat and take major credit.

Whenever there is a bad club picture within seconds she'll be zooming in, making pixelated screen shots of your bleary eyed face. She posts them to the chat with some accurate tag like "when Dominos ask if you want garlic mayo".

Wears slogan t-shirts with sassy quotes on like "boy bye", likes cats because of the funny Facebook videos and eats sushi because it looks fabulous on Instagram. She's an all round visual person. Why use the English language to invite someone for a drink? Using small cartoon figures is way more sassy.

Totally clueless. She's constantly asking how many euros to bring to Ibiza. Whilst everyone else wakes up early to get Glastonbury tickets she'll have a lie in and yet she still makes the festival. Always asking for the nightclubs post code, like have you heard of Google hun?

The one who's always on the chat

Either this girl is unemployed or they just feel incredibly confident that they'll finish their human geography degree with a 2:1.

The group chat is her BBC news, it's where she found out about Trump winning the election, brexit and Brangelina splitting up. Her thumbs are super dextrous from constantly tapping out letters on messenger.

She's always sharing dull information, "omg some guy just got on the bus and he literally won't stop coughing." Cheers babe, my phone just went off in my art history seminar.

When you don't want to spend your Monday night necking blue shots until 4am she'll make you feel like you're wasting life. Will post directly onto the girl chat pictures of her glugging pink prosecco in VIP booths or at grime nights, arm drooped around the MC. 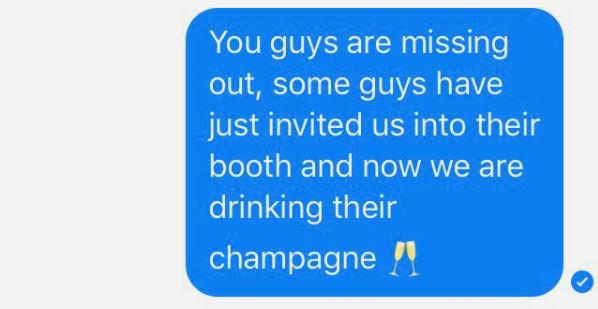 Constantly posting links to protests on literally anything from "feminists against carbon emissions" to discussion meetings on municipalism. You are too ashamed to admit 1. you don't know what municipalism is or 2. you will always pick Spoons over political agitation.

She has box dyed blue hair and docs and always does really well at uni even though she spends 82% of her time dragging banners around empty town squares. 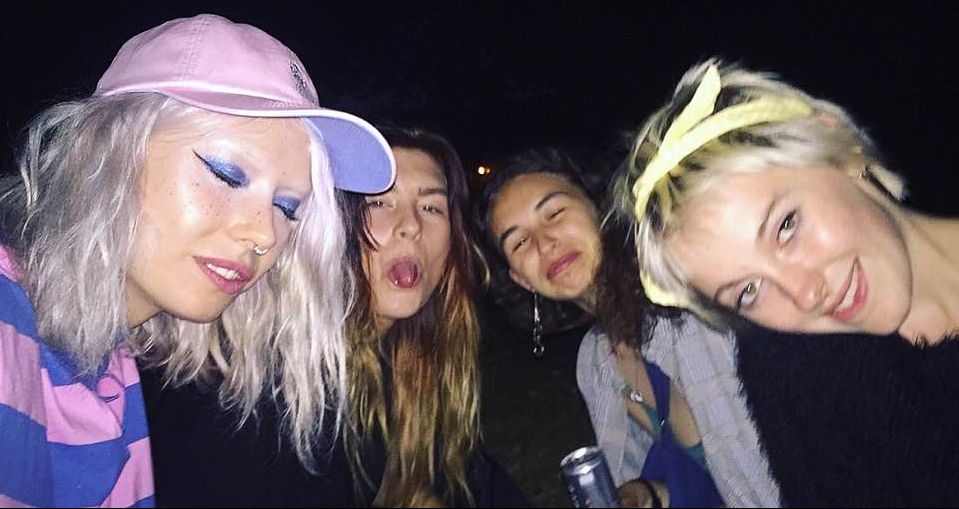 Never posts anything, she just enjoys the chat drama. For her it's like watching an episode of TOWIE. Soaking in the gossip about Eliza drunkenly turning up at her exes front door or the passionate debate about whether or not Avril Lavigne is a clone. Maybe contribute?

The one who just posts pictures of her own face

It doesn't matter whether you're asking what time pre-drinks starts or how the first day of her PR internship was, she will reply with a front cam of her double chin. 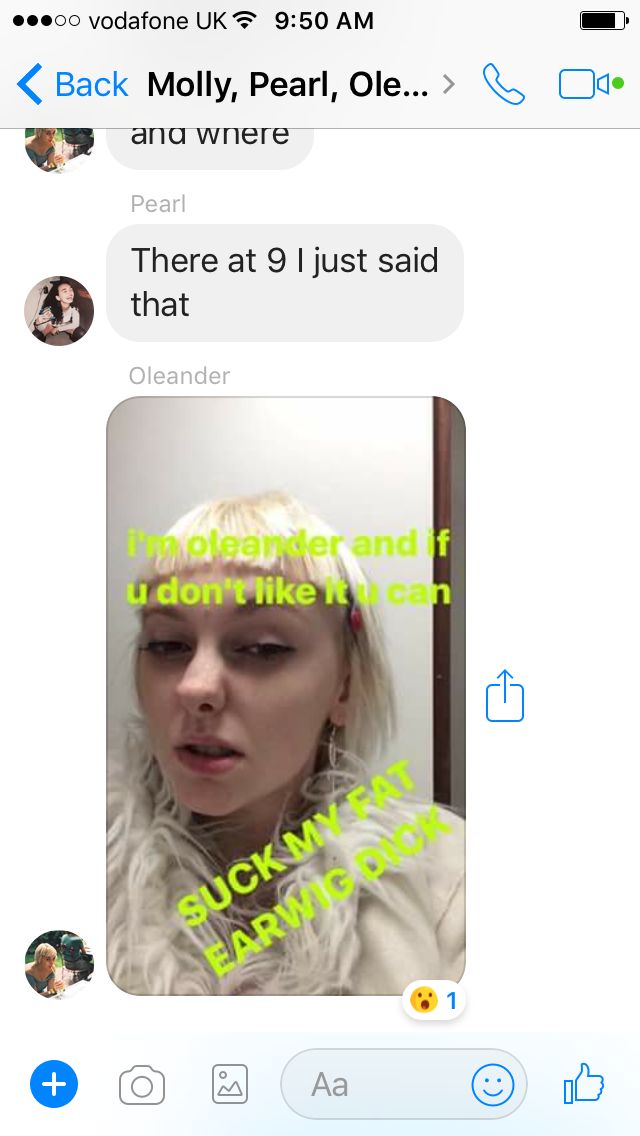 The one who takes bitching way too far

You're enjoying slagging off a girl who is stealing your mate's boyfriend. Everyone's aware they're being shit feminists, but it's all in the name of making your friend feel better, if only for 20 minutes. Then Laura comes bundling in "she's gotten so fat as well".

Well done, now you've poisoned the whole conversation with your sharp claws. Everyone puts their phone on silent and reassesses their morals. 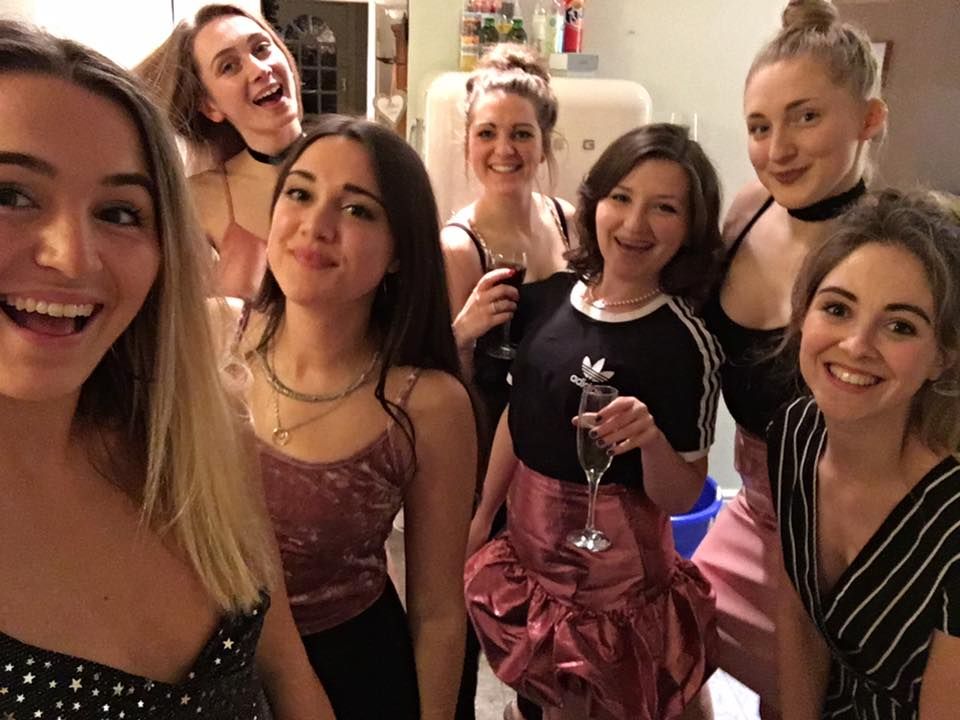 The girl who tries to make everyone do new things

She reads way too much Timeout, she's always posting on the group chat links to weird events like dubstep rollerskating discos, bars where everything is made of ice, or rooftop parties in December when the temperature is -10 degrees.

You say "yeah sounds fun!" but when Friday night comes around you everyones bails to go sit in the same Nandos, to eat the same medium peri-peri chicken with two sides, in the same Zara gingham crop top you always wear. She can do nothing but cry over her Fanta refill. 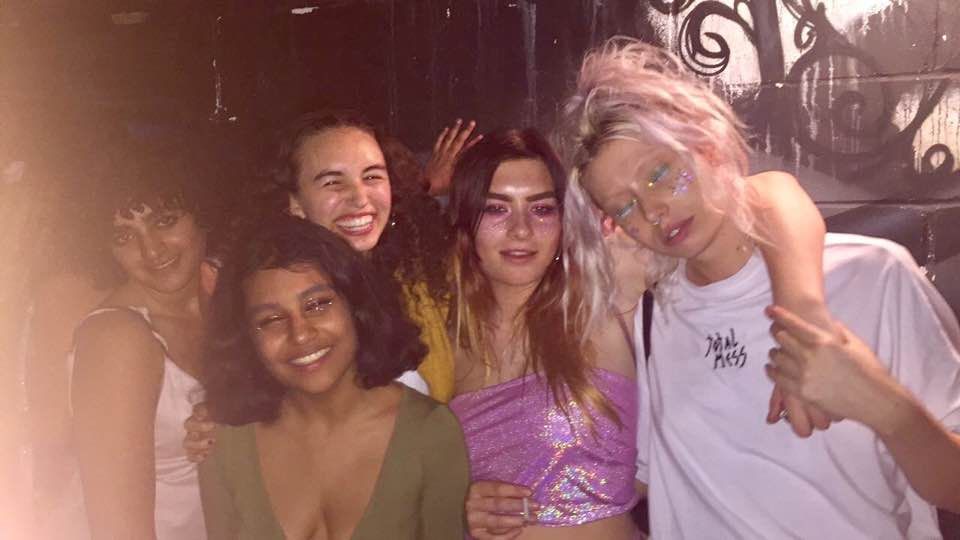 The girl who should have left the group years ago

You made friends in first year halls, but 2 months in she became friends with the netball team. She reminds herself not to click on 'sassy girl squad' but sometimes it pops up, "Sarah seen". Those small grey italicised letters make everything hell'a awkward.

When you bump into each other outside the uni library you discuss the weather because you have literally nothing in common, before you both say, "It's been so long, we need to go for a drink".

You would rather eat the Nike Airmax on your foot than have a drink with her. 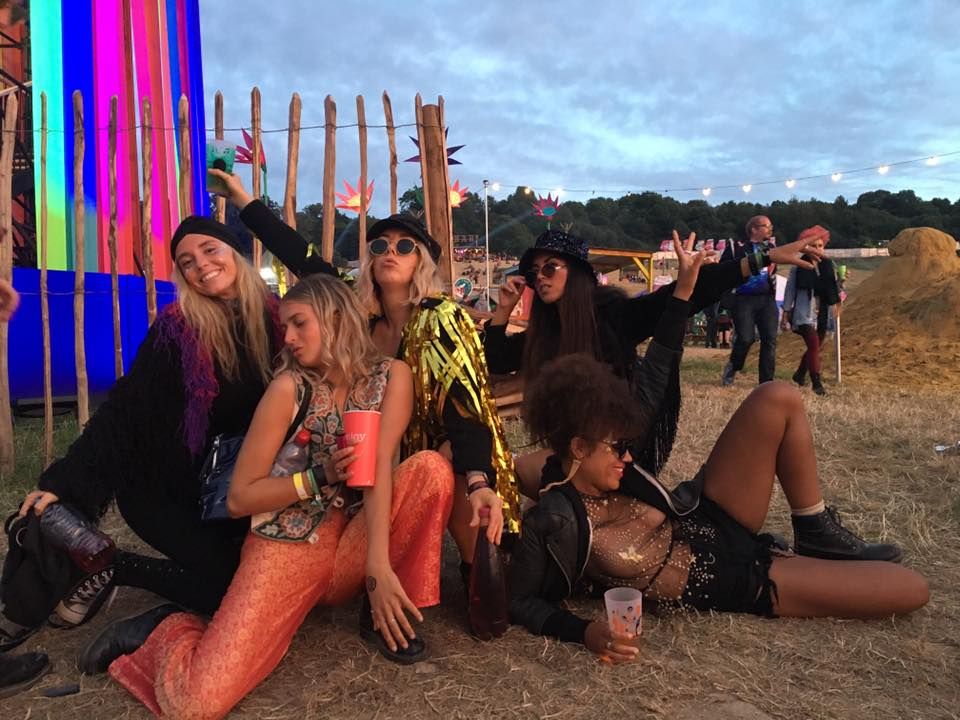 Why are you talking about The Apprentice on gal chat? No-one's watched it since 2013. I already know way too much about that dog challenge they did the other day. Remove yourself. 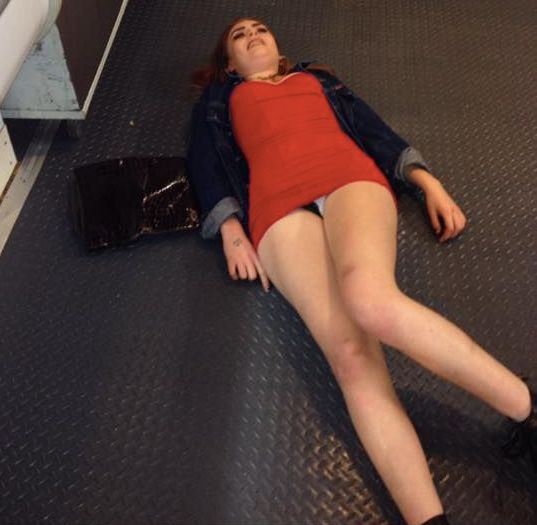 Whether it's a picture of her eating Beef and Tomato pot noodle in bed at 2pm, or a snap of her on the way to hand in her English Literature dissertation, the wrong type of 'your' in the title. She seriously needs to do some life admin.

Otherwise she's sending DMs whilst fucked on K on a sofa, like, 'seeiji u isnd a bit'. It can get annoying because sometimes you actually find something out and her yellowing complexion is not helping.

She's always in leggings, never brushes her hair, her eye makeup is so smudged it's made its way down to her chin. 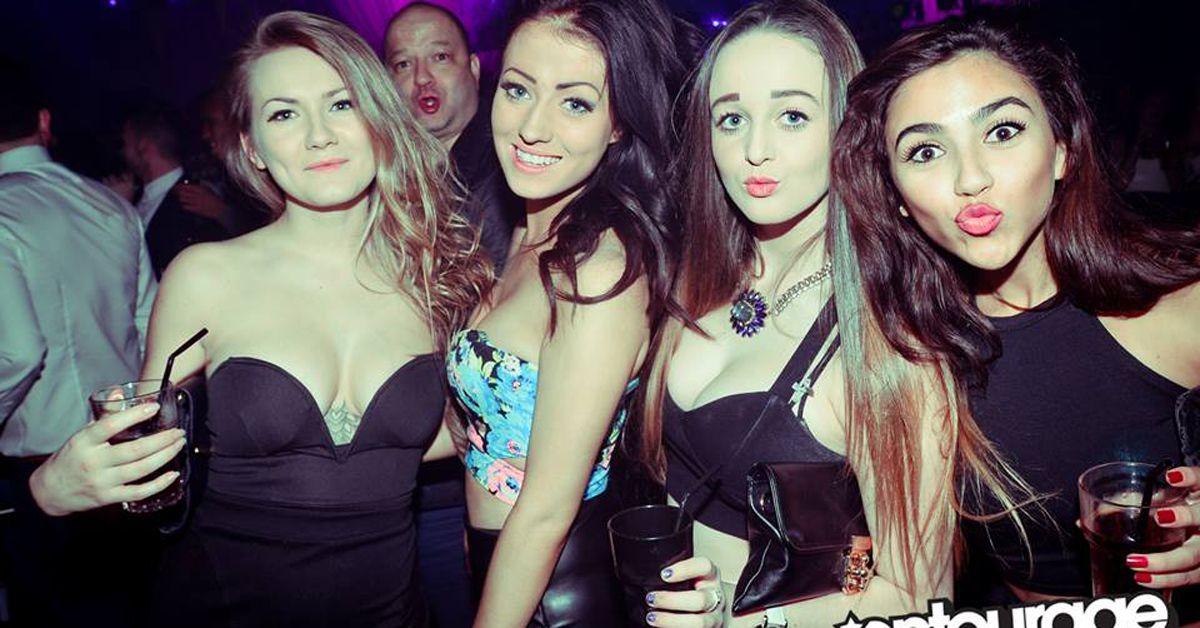 The one who's always "too busy" to reply

Literally has about 17 life commitments, she volunteers as a carer at an old folks home, has 3+ Bumble matches that she's trialling, and has mastered the day-to-night makeup face. When you meet up with her she's only at pre-drinks for an hour before she has to attend a Philosophy society cheese and wine night.

Only comments on the group chat when she realises your doing something cool for once. After skim reading the words 'illegal rave' she replies, "guuuuys what's going on? Can you update me?"

Scroll up bitch. This is not a drill, do your research.