A University of Manchester SU Officer has gone on a big rant about vegans in a series of Facebook posts.

In one post, Kwarme Kwarteng Asamoah asks why we eat plants’ “n their babies,” adding: “We need to protect plant rights too.”

Kwarme told The Manchester Tab: “While I totally respect vegans’ decision to choose not to eat meat, eating plants is a big hypocritical act according to their own framework of what is right and wrong.” 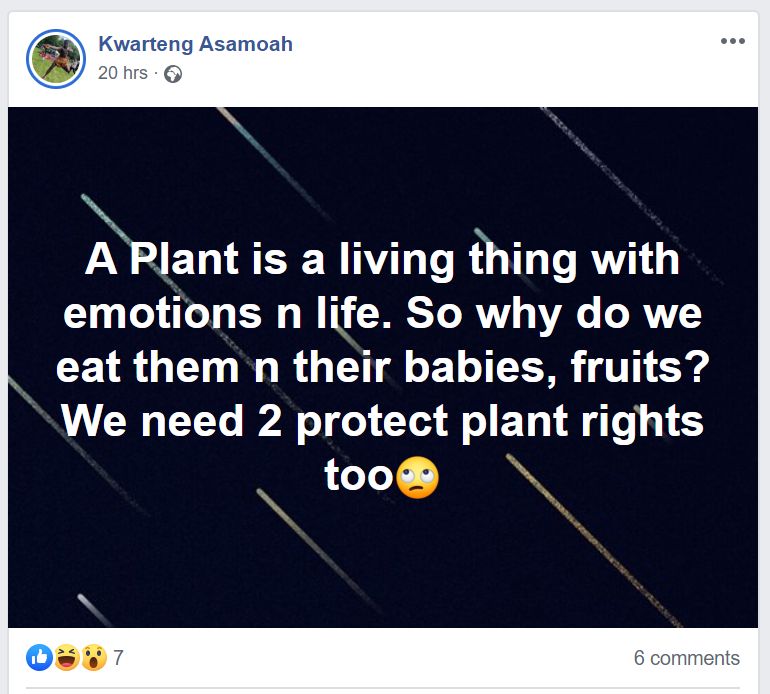 Sharing a Daily Mail article in which meat-eaters were photographed throwing meat at vegans, Kwame said: “Animals, plants and humans should find something else that is not a living thing or a derivative of a living thing to eat. No one should eat each other.

“I couldn't agree more with meat eaters retaliation!!! If you choose to go vegan or vegetarian that is totally fine.

“But if you seem to suggest that meat eaters are cruel to animals then find another thing to eat rather than substituting if with veg, because plants are bigger living things that also require dignity and respect which shouldn't be touched and humiliated by vegans!!!

“This unnecessary bullying by vegans must just stop!!!!!

“Plants exhale oxygen for animals and humans to inhale to live. Just by this, no one should touch plants or it's fruits as food.” 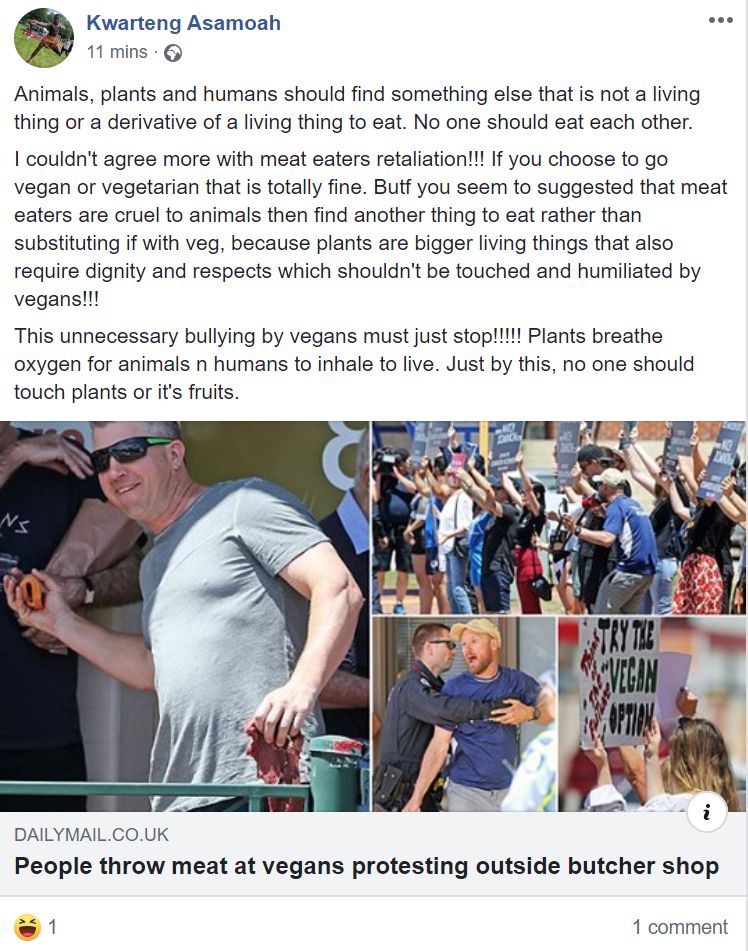 When approached by The Manchester Tab, Kwame sent a further 500-word message, in which he said: “Plants, animals and humans eat each other to survive. Plants eat the remains of humans, animals and other plants to survive.

“At least hardly to come across humans eating humans to survive as compared to animals.”

Kwame had previously been banned from campaigning in the run-up to the SU elections, after it was alleged he got students to vote for him on their phones while he oversaw. 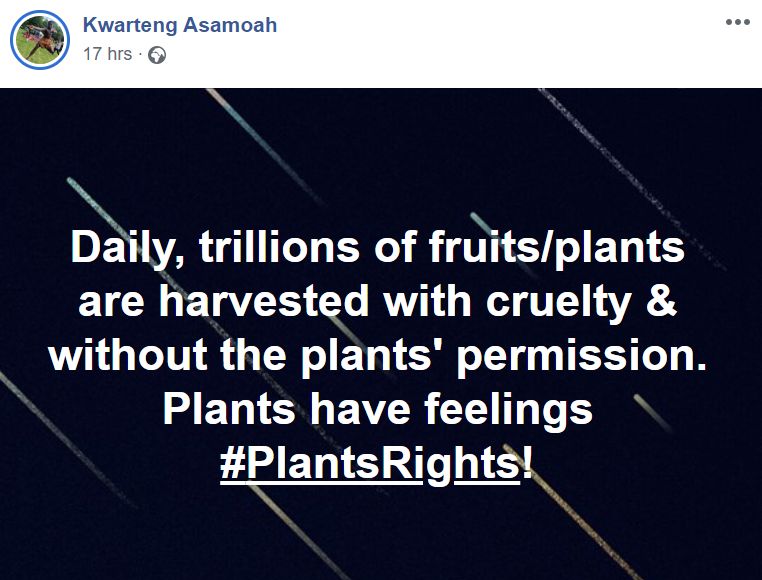 "Some Vegans recently have been very abusive and aggressive on meat-eaters with the argument that eating animals and animal products are all cruel and against the rights of animals. They have equated animals to humans and have antagonised every meat eater to be insensitive and "inhumane".

While I totally respect their decision to choose to not eat meat, it leaves me with such a high amazement of why they turn to eat plants, another living thing, for survival? It amazes me how they don't see Plants as a living thing but feels that it deserves to be cut and its products deserving of a bite.

So if vegans feel like humans eating meat is wrong, then they eating plant is a big hypocritical act according to their own framework of what is right and wrong.

Plants are one of the greatest living things on earth because they exhale oxygen for us to inhale. What else is important than that!! Yet they think eating them is the right decision. Why would they want to eat another living thing like plants and think it's okay but not okay to eat animals? Do they seek the permission of the plant before eating them and their fruits?

A few months ago a journalist starts another argument for mosquitoes to not be killed because it's against animal rights. This argument goes on and by the time we realise, it becomes another movement which gains innocent souls as followers.

All these are double standards and an ideology that people want to enforce on others.

In this case, to ensure vegans don't live a double standard and hypocritical life, we that love to protect plants too are demanding that they don't eat plants because plants are living things with emotions and life and required the permission of the plant like they think we can get from animals, before we eat them.

I think we should then be looking at Humans, animals and plants find something else that isn't a living thing nor a derivative of a living thing to eat do that can die these narratives and ideologies and live in peace."