Interview with The Midnight Barbers!

They’ve played UCL a fair few times, and if there’s any integrity left in the music business are probably going to be massive. ROBYN STRACHAN has a chat with one of the best bands in London. 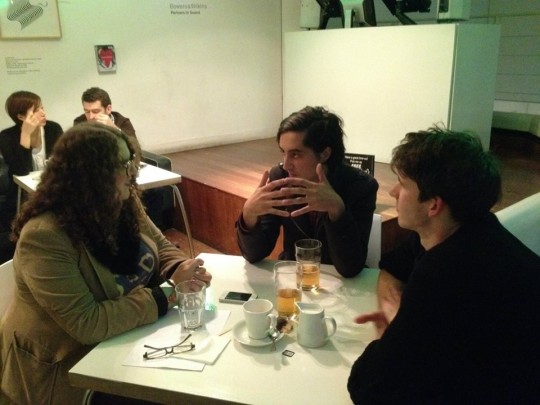 Essex two-piece The Midnight Barbers are loud. Self-assuredly, gleefully loud; the kind of sonic expansiveness that can bring a room of people to shocked attention. Needless to say, this impish racket reveals a keen melodic sensibility and an awareness of the rock ‘n’ roll archives that’s more innovation than impersonation. Suffice to say, they’re great.

What are The Midnight Barbers all about?

We’re about making more noise than two people really should be able to.

It’s an unusual name – where on earth does it come from?

An old friend, who no-one has heard from in years. Last word had it he moved to Moscow, but the last verifiable account placed him at a bus stop in Colchester, barefooted and in a robe. This is not a put on!

Is there anything in particular that motivates you to make music?

We’ve been playing music together for years, and during that time we’ve amassed hundreds of songs – at some point there must have been something serious we wanted to get across! Sometimes, though, you just feel like yelling gibberish… I’ve never sat down and said ‘this is the message I am sending to the world.’

When did you discover that you first loved music?

Not even sure if I do!  Sometimes i can hate the music I love, and who doesn’t have music they love to hate? For the sake of a clear answer, though, I would say that our obsession began when it usually does, in adolescence, and for all the usual reasons.

The music that inspired us to start playing in the first place was things like Pixies, Nirvana, Stooges, Dylan, Leonard Cohen… all the inescapable, wonderful stuff that is every awkward child’s cultural inheritance. The stuff that keeps us going, however, is more often than not the music of our friends.

What are your career highlights so far?

There are a million things! Obviously going over to Europe a couple of times was fun, as were some of the festivals and bigger gigs, radio play… However, the true highlights of our career are simple human moments, like meeting someone through music who becomes a friend, or even the look on a stranger’s face at a gig, can be a highlight. Not too long ago, a grown man wept ‘cos he was so moved by a show. That sort of thing makes me very proud of what we’re doing.

Do you think that genre, as a concept, is limited?

No, I don’t think that thinking in genre is limited, perhaps because we reckon it’s somewhat of an illusory concept anyway. It’s a tool, not to be taken too seriously; a reference point and a lens through which to view things. Captain Beefheart, for example, was ‘blues’, but that would be a limiting description of what the man did. Any truly brilliant artist does the same thing.

How does music affect your perceptions of art as a whole?

Find me the person who could map the boundaries of what informs the rest and I could show you a golden pheasant! Perhaps another way to answer would be that each of us has an inkling of what art should be, and that informs and affects our perception of the particulars. There’s an element of bleed in all things and though i couldn’t say how things do diffuse and bleed – nothing exists in isolation. Music is just as valid an art form as any other. Nothing’s prohibited from informing the music we make –  I think you need a healthy diet of influences, from all kinds of art forms. Day-to-day observations and experiences can and will also influence your perceptions of music and art in general. Less glamorously, however, we also just happen to enjoy music for seemingly no reason whatsoever. It just makes us happy, and that in itself is worthwhile.

Any kind of musical manifesto?

To create a moment of such beauty that you kind of just drift off and never return. That, and to make a hell of a lot of money forsaking the integrity and idealism of our youth!