A particularly opinionated Durham student has started a petition to put an end to St John's college entire existence because he "just doesn't see the point in it."

Pierre Davies shared his opinion on Overheard at Durham, to a resounding approval from students. His post received 408 reactions, not including himself reacting to it as well. 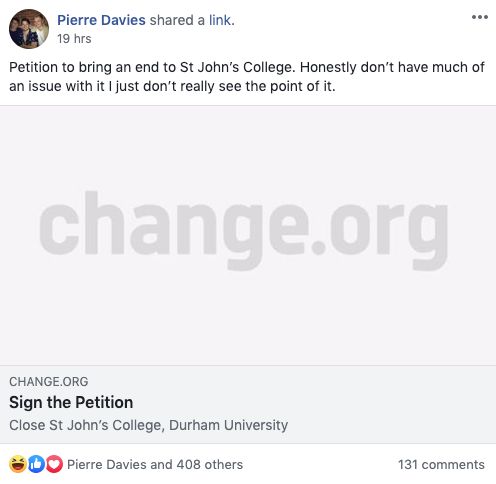 The only piece of information accompanying the petition says: "We would like to bring an end to St John’s College. Don’t have much against it but we just don’t see the point of it." It currently has a MOMENTOUS 16 signatures.

But Pierre expanded on his sentiments when speaking to The Durham Tab. He said: "Honestly, I’ve never really had an issue with it. But last night I thought I’d have a change of scene and go for a pint of something fruity in John’s. Instantly I was hit with a smell I just couldn’t put my finger on. It was almost like a mix of incense and Waitrose own brand cider (or what I imagine that would smell like – I’m a Tesco’s pear cider boy myself).

"I was also gutted to see that they only had one telly for the football, not a major crime I know but it did rub me the wrong way. The whole layout is ridiculous as well, it’s just a big stupid corridor with a couple of fancy bits and a dungeon for a bar, really. Like, I don’t get it, why do they even bother?

"The final nail in the coffin for me was when my friend lost one of his shoes (not the pair, just the left shoe). I imagine one of the John’s students stole it as a classic prank which, granted, would have been funny if they had returned it. But when he went to look for it the following day, he was told that it had most likely been given to charity. What the heck? That college’s only saving grace is the wonderful gazebo in the garden, really classy."

But what did Pierre expect the reception to his petition to be like? Did he expect the massive, zeitgeist changing sixteen sigs? He said: "I didn’t really expect anyone to sign up as it’s a bit of a pain to do, but at the time of writing this we’ve got a whopping 16 (sixteen) signatures!! It just really shows the contempt held towards this ‘college’ by the wider student community. With any luck we should reach 100 signatures by May!"

"I was asked: 'Pierre, surely it’s a pain to create a petition, is it worth it?'. My answer: yes. It really wasn’t that much of an effort. All I had to do was create an account with all my personal details, make a password and verify my email and phone number then I was ready to start the five-step petition making process! I had initially hoped to make it a government petition but after a quick bit of research I learned that in the couple months following a general election the petition service is unavailable (interesting)."

What would he want to do with St John's though? What would he prefer it to be replaced with? "I hadn’t actually given this any thought, I just wanted John’s to end. But having had a good think I do now have a couple ideas. I’ve always liked the idea of a student spa. Like, with saunas, hot tubs and massage rooms. Life is quite stressful as a public figure and I wouldn’t mind a rub down every once in a while.

"Alternatively, it could become a karaoke bar where only I sing. With a couple of great tunes in my locker such as Sweet But Psycho (Ava Max), All Time Low (The Wanted) and Glad You Came (also The Wanted), I genuinely believe that I could make this place more profitable than the university itself.

"Lastly, we could make it into one of those places with lots of books, study spaces and computers available for work and research, except no one is allowed to be a dick, that bit is really important. To be honest, I don’t really care if it isn’t even replaced by anything, all I want is for it to stop. I’m just thankful they have that lovely gazebo because if they didn’t I fear that I might have said some really offensive things."

All we can say is wow. If you feel the same as Pierre – and honestly after those moving quotes, how can you not? – you can sign the petition here. Pierre is counting on you. 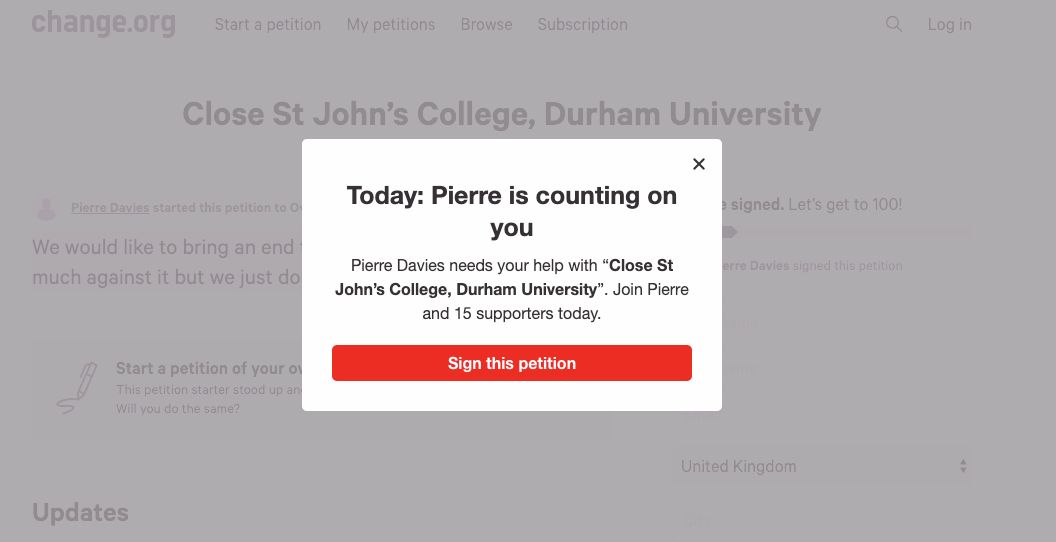