Can FaceTime actually be romantic? I went on an online date to find out

Lockdown has caused the end of many things. Mid-week binges at Jack’s Gelato that are an appeasement to the latest essay-crisis victim. The frenzy of trying to get Wednesday Cindies tickets. Groggily waking up on Thursday, having failed to get said tickets, and having instead drunk steadily for two hours in the queue.

Not least is the end that many people are currently experiencing. The end, for the time being at least, of seeing their significant other.

Maybe you’ve been together for years, maybe just a few months. Regardless of the length of your relationship, the indefinite nature of this separation can seem unbearable. I, for one, have been finding it so.

Hopes of being romantically punted down the cam, having picnics in the sun with very, very cheap wine, and, primarily, having sex in the UL, have been dashed.

During the initial period of separation you may find that you focus purely on the immediate loss of not seeing them in the flesh for a long time. After a while, as the countless ‘I miss you’s’ no longer seem to sufficiently sum up the pain of being apart, you may start to mourn the absence of other things. Shared experiences that you can bond over, nights out that you can laugh about, maybe even just going on a simple date.

Relationships rely, in part, on growth and shared experience. Unfortunately for those cynics who have criticised the internet for being the killer of modern romance, it is now, for many people, the only place that this growth can occur.

To see if this was possible on FaceTime I turned to the only really reliable source for romantic questions: Cosmo. After reading their incredibly *extensive* (and somewhat unrealistic) list of online date ideas, I enlisted the help of my extremely willing boyfriend, and tried to have a genuinely romantic date via FaceTime.

As if it was a real date in the outside world, I abandoned the sweatpants that I had been living in for over three days. I washed my hair, donned a dress that didn’t have holes or a stain on it, and actually put some makeup on. To be completely honest the extent of the makeup-ing only went as far as sort of ‘brushing’ my eyebrows and putting on some eye stuff, but it was a start.

Verdict: 4/5 on date feels. Unlike the other steps I followed this was the one that most closely resembled a real date, as nothing was really different. It felt nice to pamper myself, and gave the date a sense of occasion. It was probably also the first time that my boyfriend would be seeing me in something other than pyjamas since lockdown began. 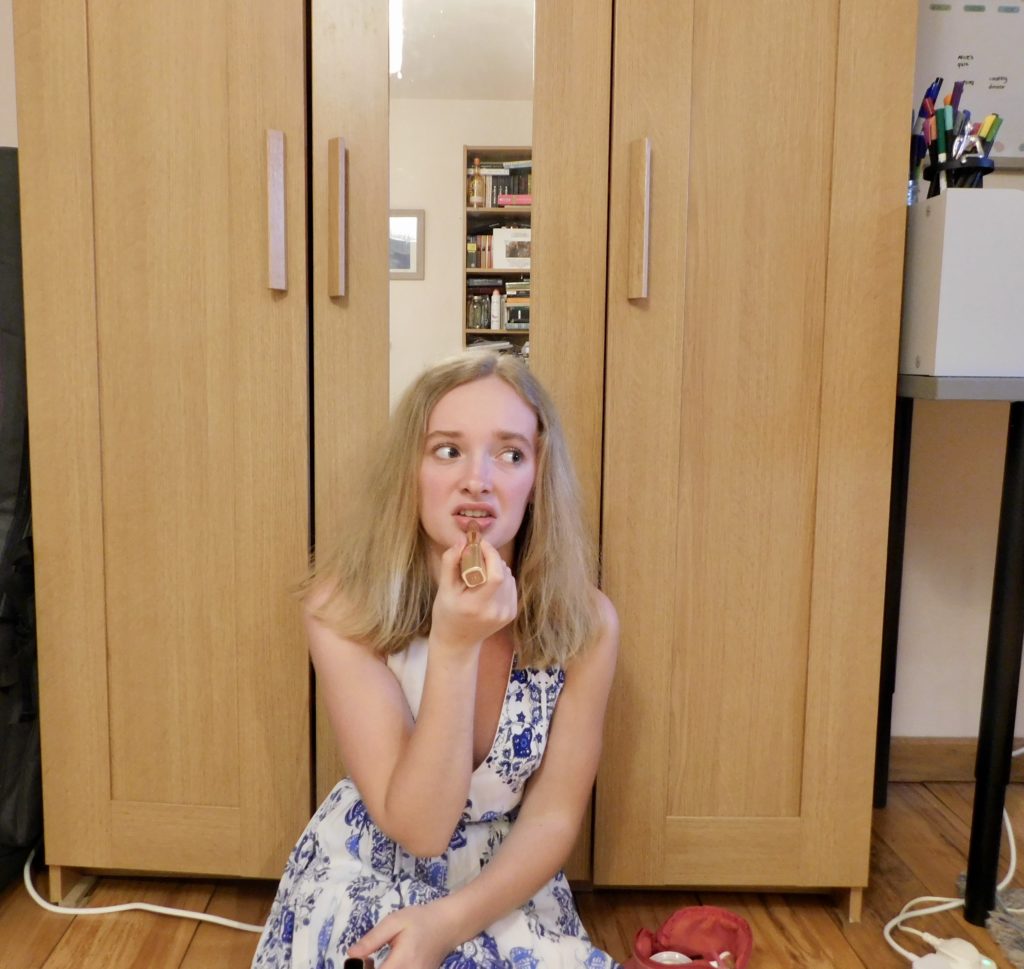 Just because you’re on FaceTime it doesn’t mean that you have to look like you’re in the middle of a police interrogation. Turn off any very harsh lights you may have. Maybe you have one of those posh dimmer switches that can instantly set the mood. If not, then just get creative. Keep the lights on but move to a part of your room that is in less direct light. If you have candles you could also light them, but try not to set fire to anything.

I learnt this the hard way after leaning over-enthusiastically over a candle, and setting light to my hair. Nothing quite creates a romantic atmosphere like the smell of burning.

Verdict: 3.5/5 on date feels. Again, like dressing up, this was really cute because it felt like we were making an occasion out of it. It was far more special than a  regular video chat. Seeing the effort that my boyfriend had gone to to make his room look romantic, (he’d even dressed up the teddy bear I’d leant him), gave me that warm mushy feeling.

Of course this step is not mandatory, if you don’t want to drink that’s fine. For the rest of you that, like me, have worryingly little regard for your livers, I would highly recommend it.  Now is the perfect time to learn how to mis cocktails, and drown your sorrows. As usual, alcohol makes everything seem a lot better than it actually is.

I tried to make myself something with gin, but as we didn’t have anything like tonic, lemonade, or other fizzy mixers that help mask the actual alcohol, I settled for some gin and apple juice. An interesting combination, but one I’m not sure I’ll be repeating any time soon.

Verdict – 4/5 on date feels. Like all good dates, this one started with alcohol. It helped to loosen me up, to stop worrying about making things perfect, and just enjoy spending some time – albeit at a distance – with someone I had really been missing. 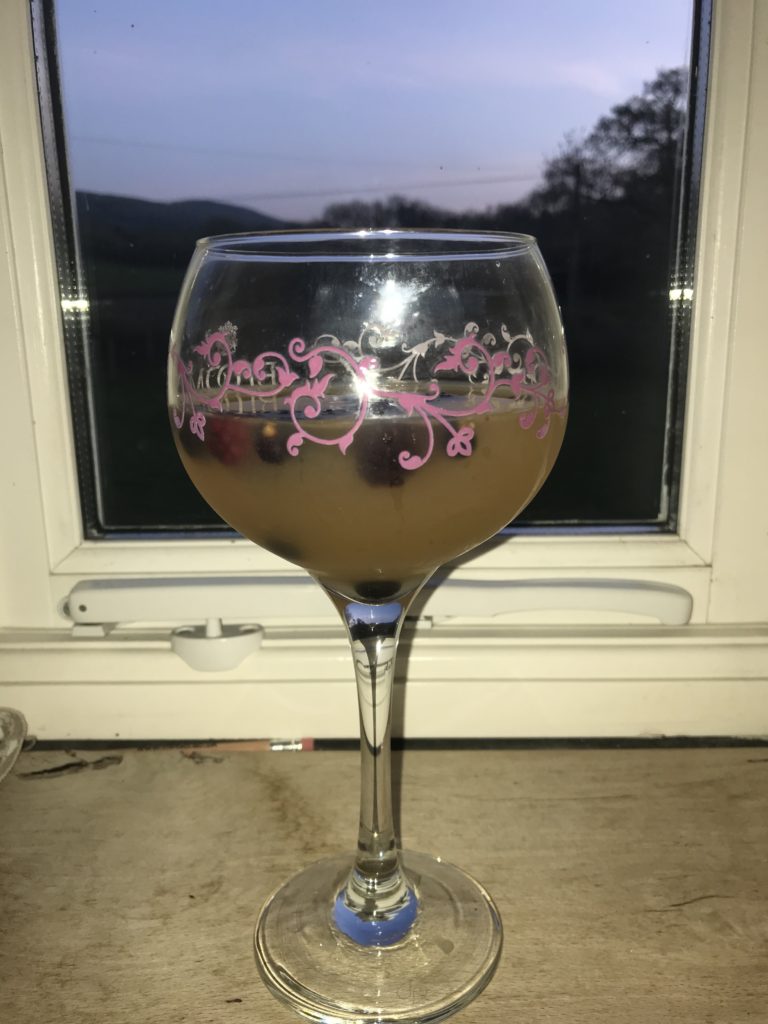 My rather unappetising looking cocktail….

Step 4 – Watch a movie together

What better to convert to online romance than the most simple – albeit cliche – date there is? Dinner and a movie was one of Cosmo’s top suggestions.

I don’t particularly enjoy watching other people eating, and as food is sacred tend to spend very little time actually talking to the person I’m with while consuming the meal. For those of you who are a bit more sociable, and don’t hoard your food like a dragon guarding it’s golden egg in the Triwizard tournament, this might be a more viable option for your date. You could even cook a meal *together*, choose the exact same thing to both cook, and FaceTime each other while doing it.

The movie part though, I could do. We tried out Netflix Party, where you can watch something together and talk while you’re doing it.

I will admit that this wasn’t as successful as I’d hoped. Normally the nice part of watching a movie with you’re partner is snuggling up with them on the sofa/bed while doing so. Although we could still talk, and message each other on the chat section of Netflix Party, doing this actually made me miss my boyfriend more.

Verdict – 2/5 on date feels. If you’re used to going to the actual cinema together then this might be nice, but if you normally just chill at home together and watch tv, then this probably isn’t the best option. More than anything else it made me aware of the lack of physical contact.

Step 5 – Play a game together, or do some sort of activity

Cosmo suggests that you get crafty, so we *attempted* to draw pictures of each other. Emphasis on the word ‘attempt’. This is a good option because you can put as little or as much effort into it. Moreso than watching a movie, it makes you feel like you’re actually doing something together. Despite our dubious art skills, the activity made us laugh.

Alternatively you could play a game together, online or otherwise. If you’re looking for online options the Tab recently released a list of the best online games you can play with your friends.

Verdict – 4/5 on date feels. Even though it was a small, sort of silly activity, it was nice to be doing something together. Again, if you can actually do something together on FaceTime it creates a more lighthearted atmosphere, and can help to avoid the endless cycle of ‘I miss you’s’ that I for one am guilty of sinking in to.

Step 6 – The part where you’d probably have sex

Most good dates end in sex. For us stressed Cambridge students, this is generally the part we look forward to most. Sadly this is the part that the internet most fails at.

As per, Cosmo has many suggestions, from having phone sex to getting one of those weird kissing simulators that you’ve probably only seen on The Big Bang Theory. I’d advise against these, after a lot of online digging the only one we could find was a weird contraption called Kissinger, that disturbingly had the face of a pig.

While phone sex may be a good alternative for those who live alone, the rest of us live in far too close proximity to family members for this to be a good option.

Verdict – 1/5 on date feels. Obviously no good real alternative. Predominantly relies on the level of soundproofing in your house.

So, can romance survive on FaceTime?

The answer is yes, of course it can. No, it’s not as good as being together in person.  Yes, you’ll probably come away missing them more for having seen them and not been able to hold them or kiss them or ‘accidentally hit them while they’re sleeping’ because they’re snoring. But, if you’re both open minded and willing to try, it can work for now.

Sometimes it may feel hopeless, and the time when you can see each other again can seem unbearably far in the distance.  It’s okay to be sad, it might be weird if you didn’t. But don’t worry, this won’t last forever. Before long you’ll be being romantically punted down the Cam, getting extremely wet, and thinking that this probably wasn’t a very good idea after all.

Unless stated otherwise, all photos are the author’s own.