From Fry and Laurie to Mitchell and Webb, they all did sketches. And they did it in a way that was unique to them. They did the thing nobody else was doing and made it their own. Second Generation displayed exactly this character.

"Second Generation: INTEGRATED" is a BME sketch show with a quality set of performers. The topic of sketches is narrowly focused on making fun of BME stereotypes and their personal experiences in a predominantly white culture. The writing is impressive, using original and complex jokes that could be understood from a wide range of audiences.

Not every joke landed with a laughter, but seldom was a joke not hitting someone. There was some quality material, which if focused on and expanded upon could become a stellar set. Indeed, these performances are perfect for writers to refine the jokes included; you just don't know what's really funny until you get on stage and hear the crickets. 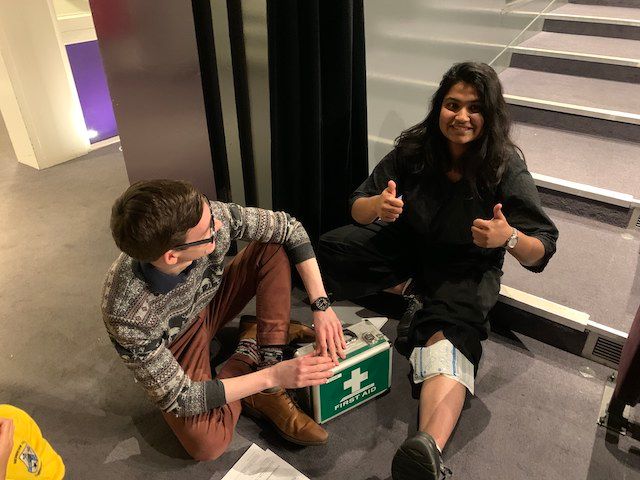 Each of the actors seemed to fill their own comedy niche, especially Imane Bou-Saboun, the mother figure of the group. Regularly she was seen ranting about the loss of values in her children and just how good (or bad) the 'olden days' were. Every time she was on stage you knew you were in for a treat, and likely a good old rant.

Zaynab Ahmed, a newcomer to the comedy scene, was fun and lively on stage. There was a good flow between herself and her fellow actors and she had great comedic timing: a key skill in short lived and fast paced performance. Fatima Eshani, a familiar figure in the sketch comedy scene was wonderful to watch. Her stone faced impressions of Alexa (of Amazon fame) and phone call centre employees were a perfect demonstration of her elegant sarcastic humour.

And the final member of our performers, the only male of the group, was Seth Daood. He filled many of the male roles, including the character trying to get married to his cousin. Lively and vibrant on stage – and with some wicked dance moves – he seemed very versatile between the different style of sketches, and equally good at being the main character as well as the complementary one.

The sound design was very simplistic and consisted of some overhead voices, and catchy music (a favourite of mine being the remix of the Eastenders theme tune) which played in their favour. Anything more would have been superfluous and might detract from the comedy. Similarly, the lighting design, besides a few sketches which required it to be slightly more complex, was kept simplistic in typical sketch show fashion. Being such a topic-focused sketch show, very few props were required, and this worked well with the performance.

To end as I began, sketch shows always come at the risk of being a cheap imitation of their predecessors. "Second Generation: INTEGRATED" didn’t hit the spot every time; some jokes did fall flat. A mixture of overcomplicating a joke here, dragging it out a bit too much there. But despite this they were brilliant fun to watch on stage. They got some hefty laughs out of myself (a self-proclaimed sketch show enthusiast) and were original.

They weren’t a cheap imitation, but a newly sprouted flower figuring out which way the sun shines and going for it.