A play that steals your attention and refuses to give it back until the final curtain falls.

This play was eye-catching before it even began. As I searched for my seat alongside the rest of the audience, I glanced over at the dimmed stage to see a spectre sitting at a desk. Behind him loomed a weapon-laden wall, scattered with pistols, swords, handcuffs, an axe, and a crossbow. The brisk pulse of rock music trembled in the background, starkly contrasting with the leisurely way the spectre leafed through the pages of a manuscript. This strange conglomeration of fast and slow, of the hunter and the academic, made for an intriguing impression of what was to come. Indeed, of what was to come, I had very little idea. I don’t want to give too much away, but there are so many twists and turns in this play that even the most seasoned attendee of thrillers would not be able to predict where Levin takes the plot.

Deathtrap is a thriller written by Ira Levin in the 1970s. The play focuses on Sidney Bruhl – the spectre on stage – a once-famous playwright suffering a drought of ideas. A young playwright, Clifford Anderson, sends Bruhl the manuscript of a brand-new thriller, 'Deathtrap'. Recognising its genius and potential for great success, Bruhl conspires with his reluctant wife, Myra, to publish the play under his own name. I was uncertain how Bruhl was going to achieve this – although the weapons and the macabre name of the play led me to suspect that foul-play would undoubtedly be a part of the plan. There certainly was foul-play, but not in the way you might expect. 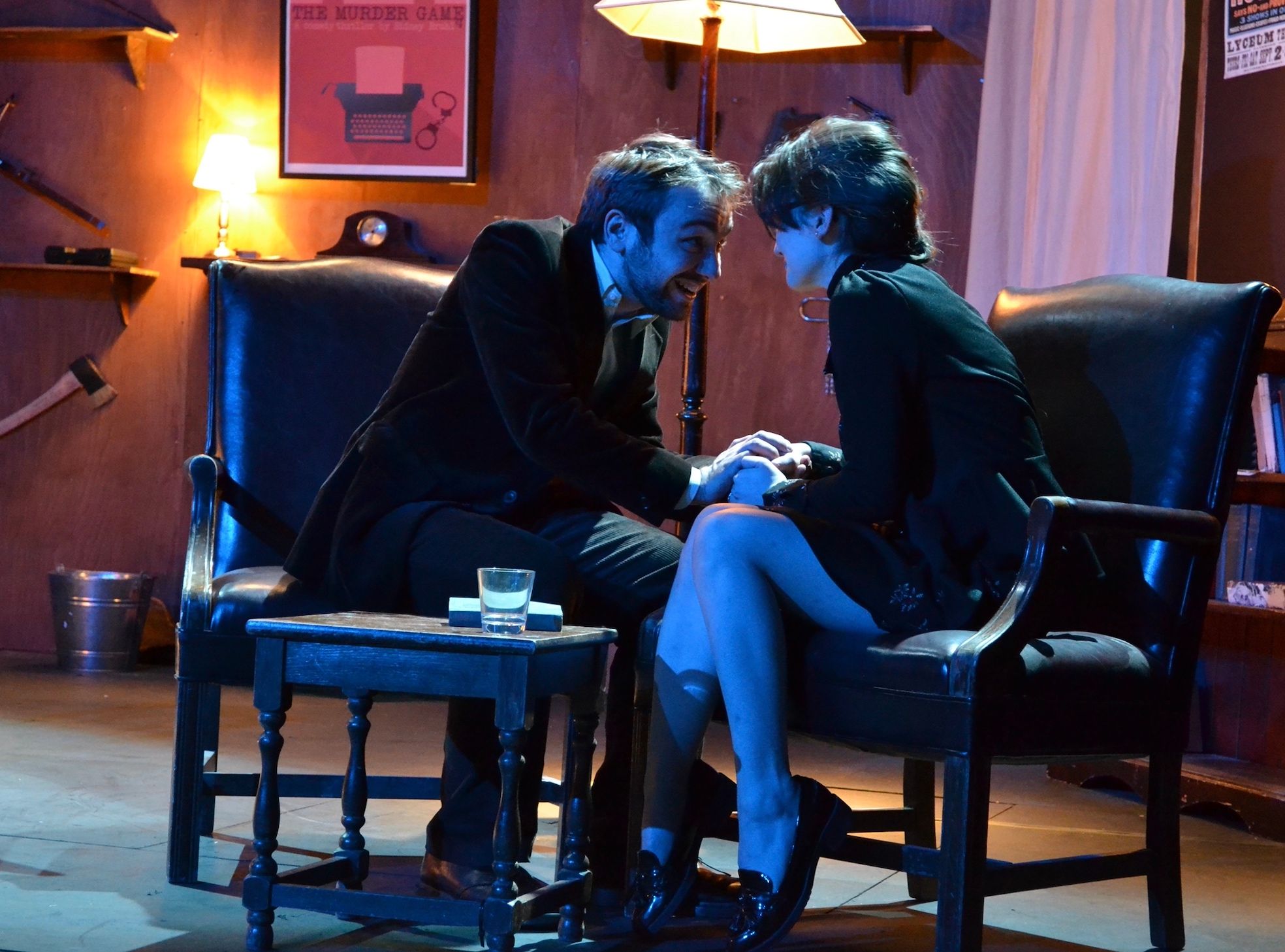 Connor Rowlett’s striking production is very aware of its own theatricality. As I took my seat and the lights dimmed, mystic, discordant music rang out across the stage as crimson lighting cloaked Bruhl and the surrounding set. On the wall, above the fireplace and sandwiched by weapons on either side, was projected the title of the play: ‘DEATHTRAP’. It was a melodramatic beginning, signposting itself as a thriller with the cliché unsettling music, and the blood-red appearance of the stage. Far from these clichés being a flaw though, I think this was a brilliant touch from Rowlett, as the play continued in a melodramatic vein, challenging its own theatricality again and again. Sidney Bruhl, who was superbly played by William Batty, exemplifies this melodrama over and over; from his histrionic pretences over the phone to Clifford, to his casual theatre references, such as “Exit Dagger” – he embodies somebody who has lost touch with reality after years of immersing himself in fiction. 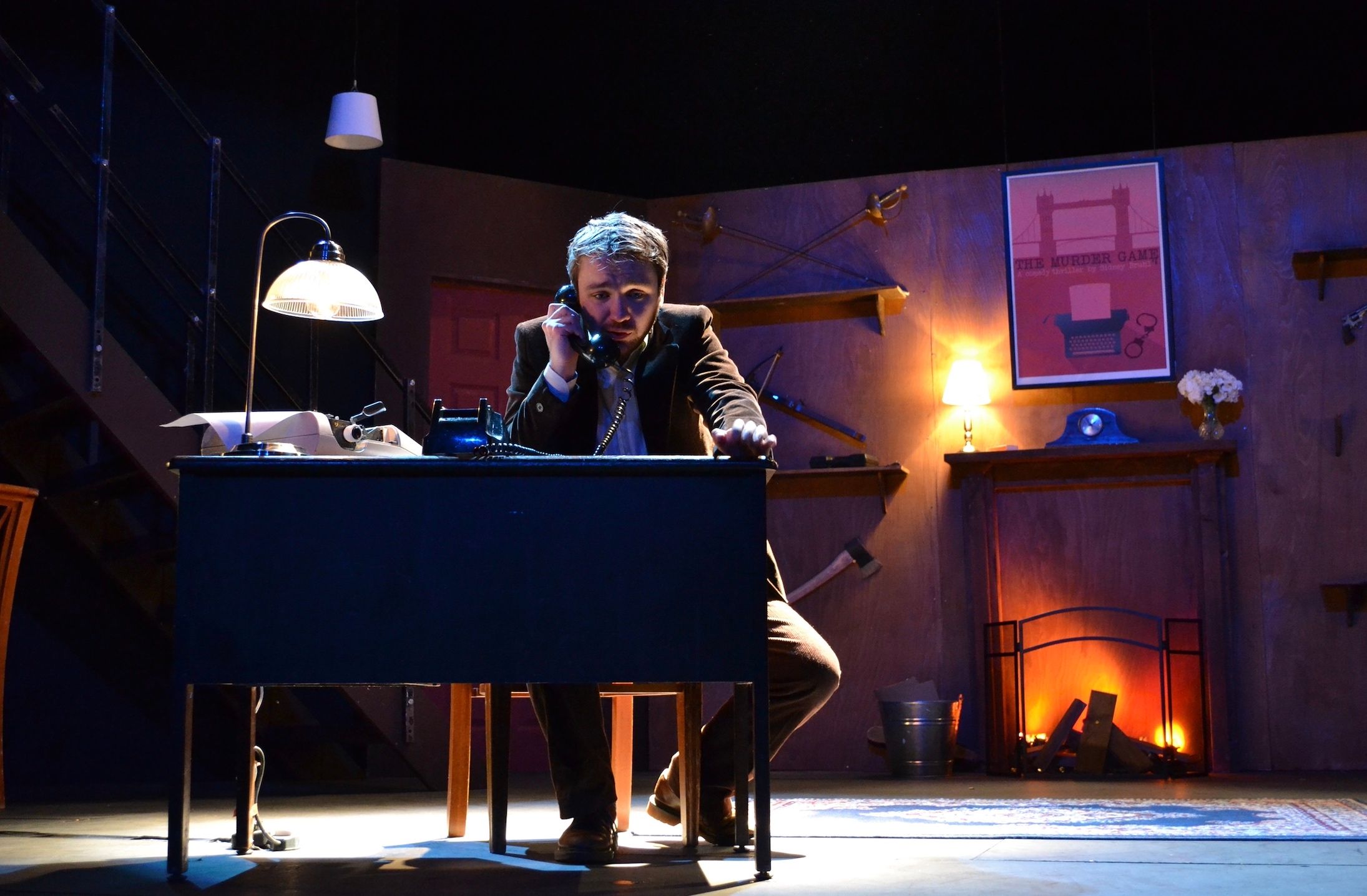 The acting was incredible on all fronts. Both William Batty and Jonathan Iceton were brilliantly convincing in their roles as Sidney and Clifford. The juxtaposition created between the two characters – Batty’s Sidney being dryly sarcastic and Iceton’s Clifford being sprightly and self-assured – made for a very interesting relationship. The fact that Sidney was bedecked in shades of brown most of the time, while Clifford ranged from a turtle-neck, to an orange silk scarf, to a floral shirt, meant that Christina Childs' costuming emphasised the difference in their dynamic. So too did Rowlett’s staging, with two desks at one point being pushed against each other; on one side sat the languid Sidney, prodding tentatively at his typewriter, while on the other side sat Clifford, avidly hammering-away at his work. I was immensely impressed by both performances, and by the cadence of Batty and Iceton in their roles, with each controlling their volume and tone to create a relationship that seemed very human indeed.

Vee Tames created an apprehensive, fidgety and garrulous Myra Bruhl, perfectly contrasting the drawling nonchalance of her husband. Alayo Akinkugbe was an energetic and humorous Helga ten Dorp, wandering around the stage with extravagant hand gestures and melodramatic outbursts, in one instance dropping to her knees before Myra to express how much ‘Pain!’ she sensed in the room, only to distractedly burst-up to direct her attention elsewhere. Akinkugbe’s bathetic tone led to some very funny moments as she announced a serious premonition only to subvert it moments later – “Trees will fall!!” – “Are you sure?” – “Yeah it was on radio.” Ben Philipps’ Porter Milgrim was comedically uncomedic, with his monotony and deadpan responses to Sidney’s jokes provoking much laughter throughout the audience. 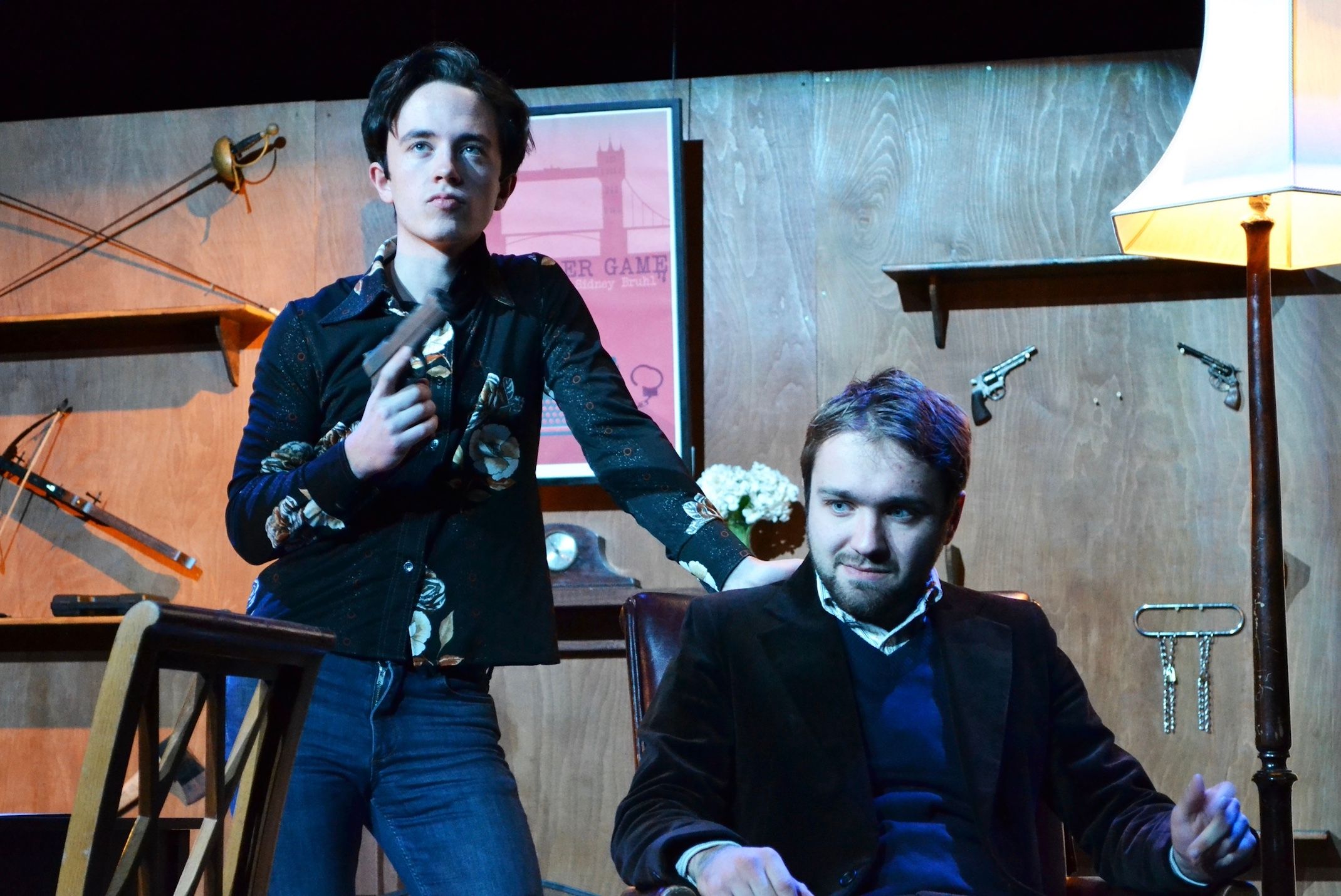 My criticisms of the production are sparse. I would say that, in the early stages of the play, I wasn’t particularly engaged by the characters, and it took Batty and Iceton some time before they reached the captivating level of expression that they ultimately did. Furthermore, at times the sound was a little over-bearing; both I and the row of spectators in front of me had to lean forward at some points to pick up on what the actors were saying underneath the booming sounds of thunder and lashing rain. These are, however, small faults in a production that got so much right.

This play is both highly enjoyable and profoundly thought-provoking. It leads you to question the very theatricality of theatre, guiding you through a plot that is saturated with twists, turns and shocking revelations. It is also funny – it is a thriller that makes the audience laugh, lean forwards intrigued, and jump back in shock. Indeed, it never fails to hold your attention, and this is perhaps the crowning quality of the play.