In conjunction with Oxford's Climate Justice campaign, Cambridge's Zero Carbon Society planned to make a banner drop at the 2019 Oxbridge boat race from Hammersmith bridge in order to protest both Oxford and Cambridge's continued investments in fossil fuels, as they had at last year's boat race. However, this year's efforts were intercepted by the police.

POLICE REPRESS PEACEFUL ZC PROTEST AT BOAT RACE. We remain uncowed. It is a testament to the power of the politics of climate justice, and of our growing movement, that the authorities are willing to go to such lengths to silence it. This merely inspires us to further struggle. pic.twitter.com/jts4DYZffU 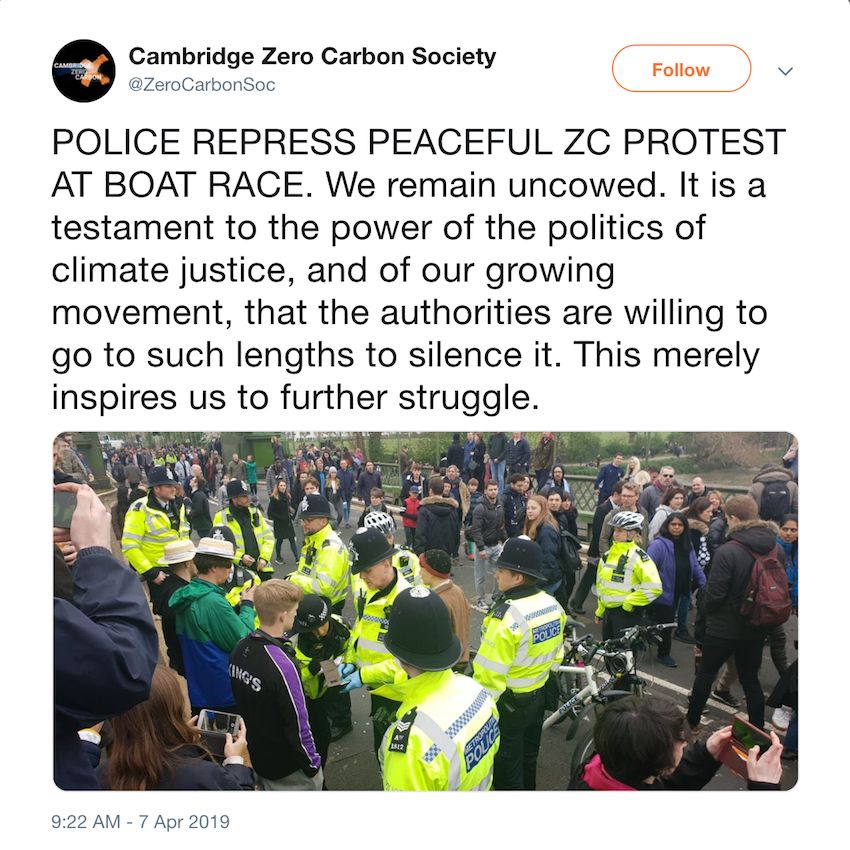 A group of 50 student activists had been on the bridge since around 9:30am, and claim that there had been a police presence there since the morning. Numerous activists were stop searched throughout the day, with a spokesperson from Zero Carbon claiming to have seen the words "Cambridge Zero Carbon Society, Hammersmith Bridge, Climate Protest" written in the notebook of one policeman, suggesting that it was a premeditated operation to prevent the protest. Searches were conducted under claims of protection from terrorism.

The bag containing the banner searched at 3pm as the men's boats passed underneath the bridge. The banner read "Oxbridge Come Clean", and was to be dropped alongside the release of orange flares. After the search, the banner was seized.

See the statement below on the interference by police with today's peaceful protest by ZC: pic.twitter.com/gchbYjSOSN

In their statement, Zero Carbon said that "the aggressive manner in which police acted at today’s peaceful, legal protest is unsettling, if not unsurprising. Having seen their democratic will suppressed within the University environment, students now find their freedom of expression impeded even in a supposedly “free” public space."

"That the police acted to protect the image of fossil fuel companies complicit in human rights abuses and state repression in the global south is no coincidence. It is clear that the protection is affected only to the rights of the exceptionally wealthy – oil companies and other major polluters – whilst activists on the ground are silenced by state repression."

They added that "It is a testament to the power of the politics of climate justice, and of our growing movement, that the authorities are willing to go to such lengths to silence it. This merely inspires us to further struggle."

More details to come as the situation unfolds.