A good show, if a little confused

Othello has everything you’d expect from a great production: a solid cast, featuring some outstanding individual performances, fluid and fast paced direction, and creatively atmospheric lighting design. Yet somehow it doesn’t work as a cohesive whole. It was entertaining throughout, and very well received by a packed opening night house, but the production was hamstrung by some odd creative decisions.

Director Robbie Taylor Hunt has, bravely, chosen to thoroughly modernise the show, setting it in a contemporary army barracks. He uses all the typical trappings of modernised Shakespeare: military uniforms; a set of bare scaffolding and camo netting; loud, pounding music.  The most radical modernisation was the much talked about gender-swapping in the production. Both Othello (Lola Olufemi) and Iago (Laura Waldren) are female in this production, and correspondingly, Desdemona (Oli MacFarlane) and Bianca (Toby Marlow) are male. The aim of this, according to the show’s publicity, is to explore a new framework of gender politics, alongside the traditional themes of racial discrimination and mistrustful relationships.

The gender switching certainly made for interesting viewing, and created some fascinating relationship dynamics. In particular, the sexual tension between Iago and Roderigo (Jack Parham) felt like a natural part of the play, even though it plays no part in the text. Elsewhere the gender switching created some narrative confusion and raised some unanswered questions, particularly when it came to having a male Desdemona. Further complications are added by the lack of gender-switching for other main characters, particularly Cassio (Will Peck). This raises issues of homosexuality in the alleged relationship between Cassio and Desdemona which are never properly addressed, probably because they are so radically different from the gender issues raised in the text.

There is one huge benefit of the gender switching. It allows Laura Waldren to play Iago. She is truly excellent in the role, commanding the stage for her Machiavellian soliloquies and then slinking off into the background to watch her plans unfold. The gender-switching works so well here that, from this production alone, you would never imagine it’s a role intended for a man. Lola Olufemi is well cast as Othello and particularly shines in the first few acts, though she is perhaps too shouty in the finale. There are other quality performances as well, including Will Peck’s unexpectedly hilarious Cassio. 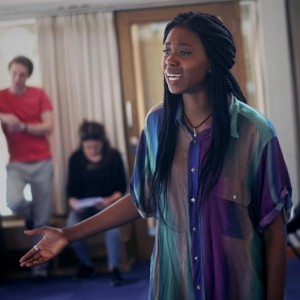 However, it is this comedic element that proves to be the play’s most problematic creative choice. The real power in Othello comes from creating a sense of tension and dread in the first few acts, essential to the success of the tragic final act. The majority of this production was played for laughs. Cassio, Desdemona and Rodrigo were all comic characters for a significant proportion of the show, and even Iago’s monologues occasionally provoked chuckles from the audience. The success of this comedy meant that very little tension was created, and so the violence of the finale fell largely flat.

Taylor Hunt’s Othello is a really solid show. There are very few weak individual elements. Every performer pulls their weight, the lighting and set design is excellent, and the action is fluid, believable and fast. However, it doesn’t quite live up to its potential. The show is humbled by a lack of tension and some confusion stemming from the gender switching.

Othello plays until 23rd May at the ADC, 7.45pm. Book tickets here.