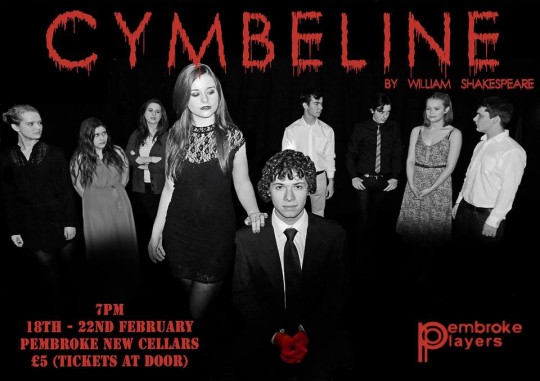 As any 2nd year English student will know, Cymbeline isn’t quite the most engaging of Shakespeare’s plays. It’s certainly no Hamlet, and with its mishmash of cross-dressing, mistaken identities, Roman invasions and descending giant eagles (which this production tactically omitted) this late play seems like Shakespeare’s last laugh.

So it may be a bit of an odd choice for the Pembroke Players but, as we’re reminded on CamDram, it’s a set text that unfortunately we can’t avoid, and their revision of it might breathe some new life into ours. A whistle-stop tour of Cymbeline: beautiful princess marries poor but worthy gentlemen against the wishes of her king father and evil stepmother; creepy Italian trials her virtue, a couple of dead-but-not-dead moments occur, meanwhile the Romans wage war, but somehow everything works out alright. Confused? You will be.

Pembroke Players complicates this further by placing the whole thing in the context of a modern day film production, complete with flip charts, clipboards and the occasional cry of ‘cut’.  This was quite an interesting take, which the enabled the awkwardly mismatching ‘Caesar’ scenes to be glossed over as a simple audition. It also helped to bring out the self-consciousness of a play that is so aware of its status as fictive theatre (can you guess which subject we do? We’re not paying nine grand for nothing…). Scenes that may have otherwise proved logistically tricky, such as ones in a bedchamber, were innovatively reimagined within the backstage dressing room.

However, at times it felt like this added metatheatricality was used as an excuse to read lines directly from the script. Okay, we get that it’s the first night, and there’s a huge volume of material to learn, but like it or not, it’s going to impact the performance. The weight and spontaneity of important lines were lost, and sometimes the emotional intensity suffered. It felt like it could’ve done with another week’s rehearsal.

That said, there was still some good acting. Aoife Kennan played Shakespeare’s heroine, Imogen earnestly, and at some points showed real passion. Robert Eyers as the aforementioned creepy Italian, Iachimo certainly had the creepy down, with the tightest pair of leather trousers we have ever seen (or ever wish to). His slimy Peter Pettigrew-esque demeanour worked perfectly for this conniving fiend, but somehow these traits also find their way into his other character, Belarius, an earnest exiled courtier. Generally the acting was entertaining, but unfortunately the script issue prevented a lot of potential from shining through.

Cymbeline may not have been the slickest performance we’ve seen, but it had its merits. It was a very ambitious play to put on and has a lot potential, but here this seemed only glimpsed at, and not fully worked out.