MOLLIE WINTLE tries out all the different ways to have fun on Easter. So you don’t have to.

In the build-up to Easter I did my bit for The Tab, and tested out some classic Easter merriments. Whilst Easter is traditionally the commemoration of the crucifixion and resurrection of Jesus Christ, more frivolous activities run alongside: card-making, ribbon-wearing and lambing to name but a few.

I took up the challenge to test the diverse waters of seasonal merriment therefore and find myself some hot cross fun.

Have an Easter Egg Hunt

An obvious option you say? Perhaps. But an EEH is a multi-player game. With my mum in Manchester, my brother in Korea, my dad in bed and my friends mysteriously inconspicuous, it looked like I would be having an EEH for one. I thought about it, but eventually decided to give it a miss seeing as I’d know where all the eggs were hidden, thus rendering the hunt short-lived, and relatively joyless.

Although wary of tackling millenary before the age of 21, I eventually caved to Mumsnet’s insistence that Easter bonnets were ‘a staple element of the Easter celebrations.’ Whilst Donna P claimed that strapping a plant to her sons’ heads, and sending them into school as Bill and Ben the Flowerpot Men had gone down a storm, I have a sneaky suspicion that the twins were lying to Donna P, and that they had actually been beaten up pretty badly. Eschewing such misguided ambition, I went old-school and made a crown. It brought in a lot of Easter themes and besides it looked great. I also made some for my friends. I think they really liked them. 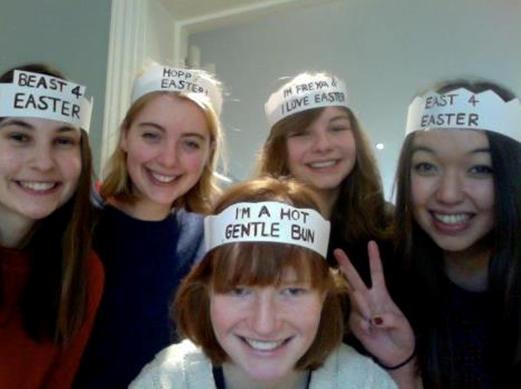 Fun for all the family.

Easter needn’t be entirely egg-centric – indeed, it can be quite conventional, focusing instead on chocolate and nature. I thought it important not to neglect nature (too often and easily done in an age of technology one feels) and went out in search of a lamb. Unfortunately, living, as I do, in North London, lambs are few and far between. Luckily, I attended private school and was able to call on my friend Jess, and her pet tortoise, Johnny. We dug out Johnny The Tortoise from her hibernation to wish her a happy Easter. Well, Jess did. Johnny had a mean face and I didn’t really want to touch her. It wasn’t a particularly special moment; we regaled Johnny with the Easter story, but it felt more of a formality than anything else. It turns out tortoises aren’t that fun or interesting, so we dumped Johnny unceremoniously back in the earth, being careful not to look her directly in the eye.

In conclusion, I can recommend getting creative with arts and crafts, and celebrating Easter among friends – if all else fails, there’s always the boat race, right?