The organisers are demanding ‘real change’

A new Facebook campaign group has been set up students in response to the ongoing debate over student services at the University of Bristol.

The event is set to take place on Friday 25th May at 6pm. According to a post by co-organiser and Bristol student Robin Boardman "The recent student deaths are a tragedy and the University's response has been appalling. An appropriate response is not a survey but real change and that is what we will be marching for." 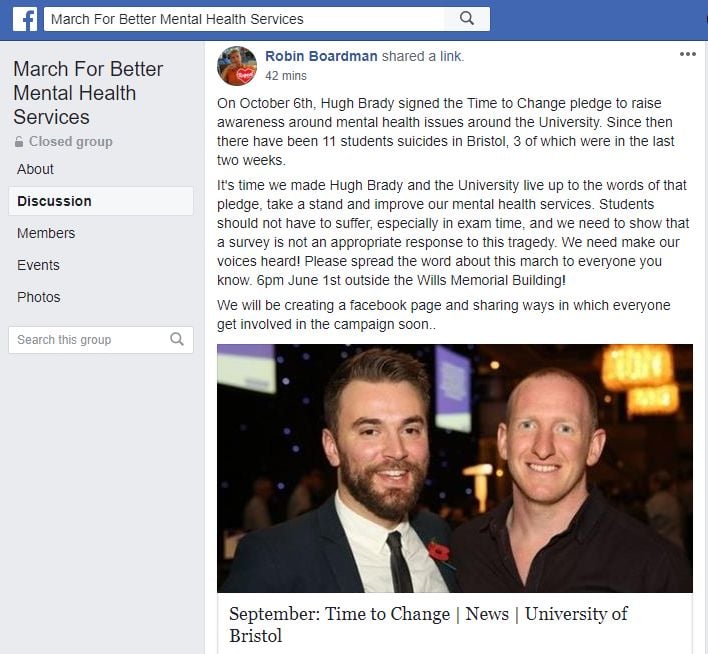 A screenshot from the event calling for better mental health provision

Bristol University has recently been under intense media focus over a number of student deaths and the way in which the institution provides mental health support. At present, the event is in its planning stages but organisers envisage the event "marching through the university campus" from Wills Memorial Building to Senate House.

The news comes in a year when student activism appears to be on the rise at Bristol University. In February, one hundred students marched against the proposed hall changes in a 'Keep Our Communities' rally on the Victoria Rooms. That same month the SU were forced to reverse their position on the changes after a landslide referendum defeat whilst in March students occupied the top floor of Senate House over the issue of university pension strikes.

You can find the 'March for Mental Health Services' Facebook event here.