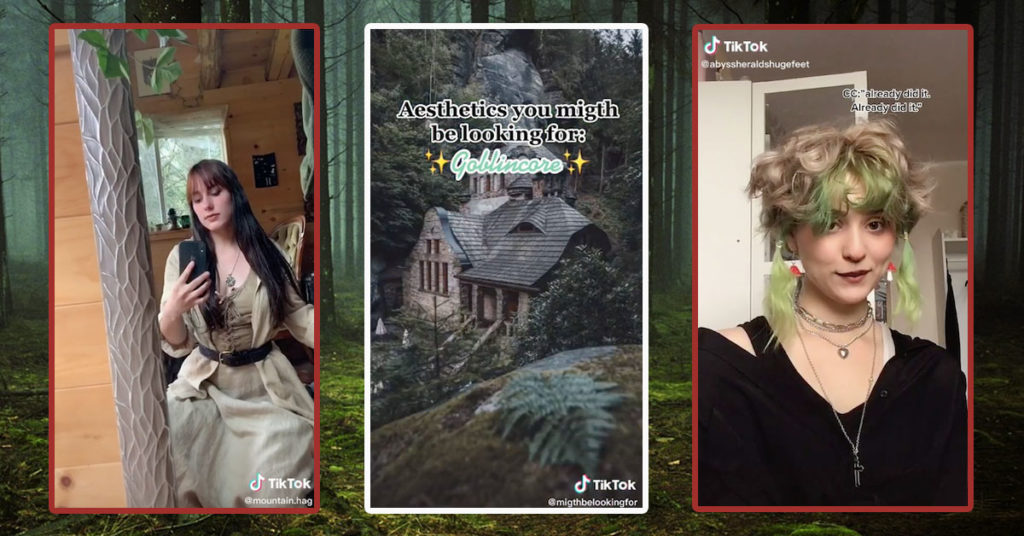 Goblincore: What is the viral TikTok aesthetic and how do you get the look?

Throughout the summer there have been many aesthetics popping up all over TikTok. First there was the “that girl” vibe all about being your best self by doing yoga and drinking green juices. Then there was the coconut girl or mermaidcore which was centred on tropical looks and spending all your time by the sea. And now as we edge ever so slightly towards autumn we have another aesthetic on our For You Pages – goblincore.

Goblincore is essentially the slightly darker younger cousin of cottagecore with a big emphasis on spending time in nature and embracing the natural world. The goblincore hashtag on TikTok has over 500million views with many associated hashtags telling viewers how to get goblincore outfits and giving decor inspiration.

The aesthetic and lifestyle has actually been around for over a year and unlike other aesthetics it is often seen as a safe space online for non-binary individuals.

This is everything you need to know about the goblincore aesthetic.

What is the goblincore aesthetic?

According to Urban Dictionary goblincore is like cottagecore but more chaotic and focuses on collecting nature.

“Some would call someone with this aesthetic a ‘hoarder’ but to us it’s just collecting, we collect anything that gives us joy which can be shells, buttons, mushrooms, bugs, trinkets and other things others would call trash,” reads the Urban Dictionary definition.

Other publications have described goblincore as “feral coziness” and a trend which embraces “chaos, dirt and mud”. The aesthetic is often called gremlincore, cottagegoth or crowcore.

It began on Tumblr before recently moving over TikTok and the roots of the aesthetic are based in a desire to escape the modern world. It’s about spending time in nature and when you’re inside transforming your space to reflect the outside. It is more relaxed than other aesthetics and is focused on just vibing.

Goblincore is less idealised than cottagecore and focuses on the dirtier side of nature like embracing moss, bugs, frogs and mushrooms. The interest in mushrooms is linked with the LGBTQ+ community as mushrooms have thousands of sexes and many non-binary individuals have found goblincore to be a safe space to be themselves.

Sküg, who is 19 and identifies as non-binary told Vice: “For me, as an autistic non-binary individual, I find goblincore as a safe community.

“Another thing I find to be a big part of the goblincore community is wanting to escape society and live in the woods. Part of this is wanting to get away from all the societal standards that are set in place.”

The desire to get away from societal standards is also linked to an abandonment of consumption which draws some individuals to goblincore. Trends expert Sabrina Faramarzi told The Guardian the rise in is goblincore due to lockdown making people realise how little they actually need.

She said: “After long lockdowns, perhaps spending lots of money collecting and surrounding ourselves with a bunch of things we don’t need, wearing loose, neutral clothing and taking lots of walks, I think we all feel a little bit like goblins right now.”

How do I get the goblincore aesthetic?

Despite being anti-consumption, goblincore products are all over Etsy and the trend is slowly moving into fast fashion with mushroom prints taking over.

In order to achieve the goblincore aesthetic you need to focus on dark colours with an emphasis on green and brown. It’s not about looking perfectly put together or as TikToker @Seaweedhoe said: “If I leave the house and I don’t look like a creature from the Spiderwick Chronicles then what’s the point?”

Jewellery should definitely include some form of mushroom or small creature like a snail, you could also go for vintage silver pieces. When decorating your room you should focus on plants, candles and collecting things from outside and putting them in jars.

To find the goblincore aesthetic in culture look for books about plants or mushrooms, watch the Labyrinth and listen to Ben Howard, Hozier and Cavetown.

Are there any problems with goblincore?

The name goblincore has recently been criticised for being antisemitic. This is due to previous depictions of goblins as ugly and greedy being used as an antisemitic caricature.

Therefore many in the community are referring to the aesthetic as mosscore or mushroomcore.

•Ok, so what actually is the ‘that girl’ vibe everyone is trying do on TikTok?