Geek Bars: What are these new disposable vapes trending on TikTok?

The Gen-Zs are obsessed

I don’t know about you but recently, my TikTok for you page has been plagued by videos of UK teens claiming to be addicted to disposable vape pens known as “Geek Bars”, similar to the American favourite “Puff Bars”. After mentally noting this as just another fad created by the app (see whipped coffee, Corona sunrises and frozen honey) I forgot about the vapes and got on with my day.

That was until I went clubbing, and couldn’t help but look around the smoking area and notice that absolutely everyone had one. It seemed the days of rollies and “rah, where’s my baccy?” were no more as people buzzed about, colourful sticks in hand, comparing each other’s flavours in attempts to determine which was best.

So, what exactly are Geek Bars and why are they becoming so popular?

What are Geek Bars and how do they work?

Geek Bar is the main brand of disposable vape pens that are currently having a surge in popularity. Coming in a range of both menthol and non-menthol fruity flavours and a range of bright monochromatic colours, they are pre-filled with 20mg of nicotine. They don’t need to be refilled or recharged, and are made to be thrown away after around 575 puffs. They’re also designed to be easy to use, with no buttons or switches – you just need to inhale to activate.

Available in most local corner shops, the bright colours and smooth, portable design is likely what has caused their popularity among young vapers who care more about the fun flavours and aesthetic of their device than the desire to stop smoking – it’s estimated that most teenagers now never start smoking in the first place and exclusively vape instead.

They retail at around £5, furthering their appeal as they’re such an affordable easy option, avoiding the costs associated with classic vape devices which retail for £30 and upwards, and require liquids to be purchased separately. 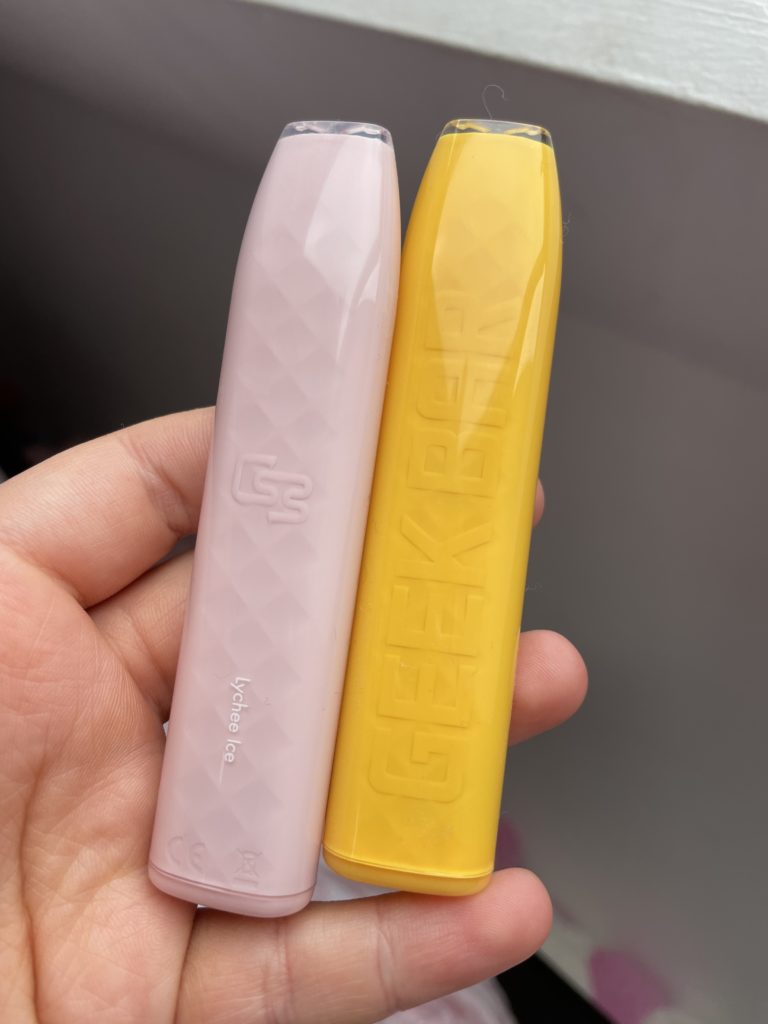 Are the Geek Bars worth the hype?

After seeing everyone else with a Geek Bar and getting major FOMO, I had to try one myself (for science, obvs.) I bought two, going for the Lemon Tart and Lychee Ice flavours. As someone who is an absolute Juul loyalist, it was going to be a tricky conversion.

After trying the Geek Bar for two days and one night out, I hate to say it but they’re actually really good. The flavours are way stronger and more enjoyable than most vapes and they don’t burn your throat anywhere near as much. Plus it makes a nice change that the vape isn’t always a bit sticky from refilling it with liquid.

I can definitely see why they’d be popular amongst first time vapers too as you don’t need to know anything about nicotine levels or burnt coils, all you need to do is buy them. They’re also much less ugly than the classic clunky, rectangular vapes yet they’re more eye catching than a Juul, which totally explain they’re Gen-Z appeal.

Are single-use vapes bad for the environment?

However much I enjoyed using them, I couldn’t help but consider the environmental concerns which inevitably arise with single use plastic. Although many seem to think that disposable vapes are the way forward, they are undeniably far less sustainable than refillable vapes.

They’re made mainly out of hard plastic, and since they can’t be refilled or recharged, they must be thrown away once the liquid has run out or the battery has died. This makes them far less sustainable than regular vapes, as the plastic main device can last months or even years, with only the liquid or pod needing to be replaced.

There are countless problems associated with the use of plastic and the waste it produces, from disruption to the food chain to poisonous air pollution. Hard industrial plastic also isn’t recyclable or sustainable, so the vape pens will most likely end up in landfill where they’ll take thousands of years to decompose. All of this takes a huge toll on our already declining planet.

In a society which is working to eliminate single use plastics, single-us vapes do seem counter productive and a step in the wrong direction – despite the ease and flavour appeal of these Instagrammable vapes, they aren’t really worth the environmental issues which come with them.

• What is the ‘BBL effect’ everyone’s talking about on TikTok and how can I tell if I have it??

• Lady Gaga in House of Gucci is the best new TikTok sound, and these are the funniest ones