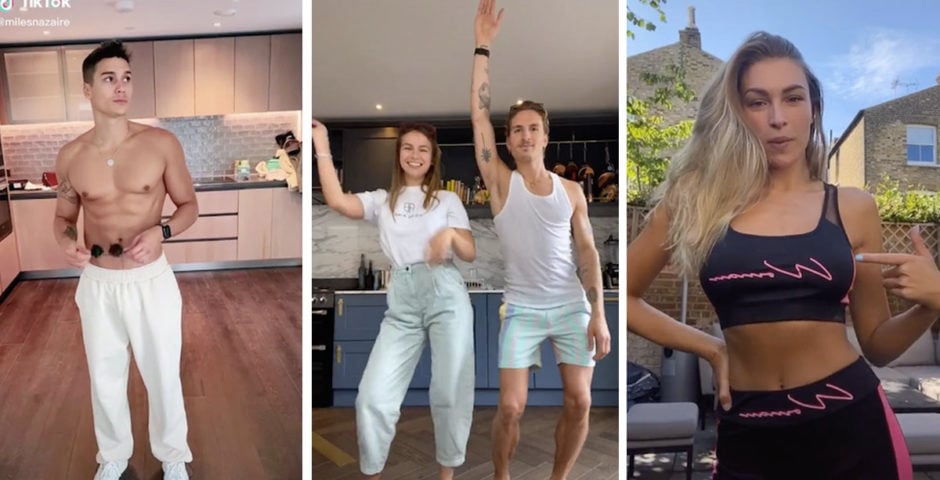 TikTok is full of celebs making cringe videos on a platform that should really be left for those under the age of 22, and now the Made in Chelsea cast are joining TikTok and creating a bunch of lame videos.

Not content with their huge following on Instagram and Twitter, some of the Made in Chelsea cast members such as Sam Thompson, Toff and Miles have all created TikTok accounts. Their videos range from cute fashion videos, classic TikTok dances to full on cringy pranks.

And honestly some of them just need to stop it right now. Jamie Laing is over 30 years old and doing the WAP dance. The majority of the Made in Chelsea cast members’ TikToks are pretty boring, but there are some that are beyond lame.

So it’s time to rank all the Made in Chelsea cast members with TikToks to find out who is the lamest, starting from bearable watching to just get them off TikTok straight away:

Millie only has a few videos on her TikTok and they’re mainly of her showing off her pregnant belly. So very unlame and just cute content that is nice to see on your feed.

@ameliasmistNot the sexiest girls @beccadelaroque1♬ On My Mind – Diplo & SIDEPIECE

Relative Made in Chelsea newbie Amelia Mist has a pretty normal TikTok. She posts the kind of things you and your mates would do because you have no idea how to be cool on TikTok.

She doesn’t take herself too seriously and it’s just some good vibes scrolling through her videos.

On Verity’s TikTok it’s mainly just exercise videos that don’t seem that great in all honesty. But they’re inoffensive, just a tad boring.

And she seems very aware of the camera which is a bit off putting whilst trying to film her abs exercises. She’s also not even verified which is pretty savage.

It’s literally just gym and food videos. Don’t know what else you were expecting.

@fredrikferrierA tribute to one of my inspirations … @hozierofficial – who are some of your favourite singers of today? ##sing ##singer ##music ##musical ##fyp♬ original sound – Fredrik Ferrier

His TikTok is just bit weird. It’s full of singing videos but with the voice overlay, which I think is him singing and then in the video he’s lip syncing himself? Idk it’s confusing and I’m not enjoying.

Unsurprisingly Julius’ TikTok is full of videos of him singing. It’s not him singing that makes him cringe, it’s his continual obsession to get famous for his music, even appearing on The Voice, that just makes it painful to watch him sing on TikTok.

And he does the occasional Kardashian voiceover TikTok which just does not fit his vibe.

Bless Rosi Mai, she really is trying. Her TikTok is full of Insta vibe travel videos and the occasional cooking video. She also does a lot of styling videos and I can’t put my finger on it but there is something very cringe in the way she points to each new accessory she puts on.

The OG bitchy queen of Made in Chelsea, Lucy Watson does a lot of cringe voice overs on her TikTok. They’re not awful, they’re just a bit meh and she does a lot of the usual dance videos, whilst casually dropping in that she met Jason Derulo.

Similarly to Lucy Watson, Emily does the usual TikTok dance videos and audios. But she also kinda uses TikTok as a vlog platform to share mini videos of her trips away and a lot of the posts could just be left on her Instagram.

Miles is shirtless in approximately half of his TikToks, so for that alone he’s worth a follow. However the majority of his videos are lots of dances, which are a bit cringe, but he’s fit so I’ll get over the basicness of it.

However the more you watch the more realise how much he’s in love with himself, one particular video he uses the audio “when I look in the mirror I get a little bit turned on”, which says it all really.

Toff was one of the first Made in Chelsea cast members to join TikTok, having been on the app since 2019. Recently she’s been posting TikToks of her new dog and fashion videos.

But her earlier ones were pretty cringe where she’s trying to be very funny. Jack Maynard pops up in a lot of them and she says Lewis Capaldi is her TikTok crush at one point, which is reason enough to be up this high of the ranking.

Right, first of all the name “The Proudlocks” puts them pretty high on the ranking of cringe Made in Chelsea TikToks. Proudlock has a joint account with his fiancee Emma Louise Connolly, who is incredibly cool, so I don’t understand why their TikToks don’t give off the same energy.

They do a lot of couples challenges and oh god, they’ve done the Harry Potter broom challenge. Now I remember why they’re this far up the list. Liv Bentley would never.

We already know Zara is incredibly cringe on social media thanks to her beggy video to Sam Thompson on Instagram last week. Her TikTok videos are her attempting to prank Sam in the days when they were still together, but they just don’t hit the spot. They’re just too try hard.

She also posts ASOS videos, did the naked challenge and, in fairness, was pretty jokes when she did the pointing challenge and said she was the one who had the worst reputation out of herself and her friend. So points for that.

Right I’m going to come out and say it, Jamie Laing is too old to be on TikTok. He almost uses it like Instagram stories, sharing parts of his day and random fact videos. Which in fairness I did learn where the original meaning of hair of the dog comes from, but it’s still just boring and cringe and not what TikTok is about.

He uploaded a TikTok of him having a coronavirus test and I could have lived my whole life without seeing a swab go up Jamie Laing’s nostrils. He also did the WAP challenge, which should be enough to get him booted off the app.

@samthompsonukThis is encompasses everything I have missed during lockdown! 😂 there’s a video I secretly filmed I may put up tomorrow about trying to teach Pete 😂♬ Think About Things – Daði Freyr

And the winner of the cringiest Made in Chelsea without a doubt is Sam Thompson. I’ll admit some of his videos are genius, but in a kind of so bad they’re good kinda vibe.

His videos with Pete Wicks are so cringe, and when they did the broom challenge together I wanted the ground to swallow me whole. Sam also treats his TikToks like Instagram, doing sponsored videos, which is just annoying because I’m jealous he can make money from another platform.

And finally watching his videos with Zara back are just sad and I think it’d be better for everyone if he just deleted them.

All follower counts were correct at time of publication.