Where are the stars from the most iconic viral YouTube videos now?

It must be very difficult to navigate life after becoming a viral internet sensation overnight. Like, you know this is only temporary, so do you chase it for as long as possible and milk the money cow? Or just accept it for what it is and try to forget it ever happened? Well, as it happens, most of the stars from viral videos have chosen to stay completely out of the spotlight (weirdly enough), apart from the more predictable Chris Crockers and ANNOYING Oranges.

So, let’s dive into the prime era of late noughties/early 2010s YouTube and catch up with the stars of the most iconic and viral videos. You’re in for quite a shock!

Was it a joke? Was he actually being serious about his love for Britney Spears? Whatever he intended with this video, the whole argument actually seems pretty poignant currently. Chris Crocker, the creator of this absolutely ICONIC video, is someone whose name has always preceded him, and it doesn’t seem like much has changed in that regard since.

As someone that was very clearly fame-hungry to the greatest extent, he has been busy since the viral video making sure that his name doesn’t completely fade into obscurity.

Whether it’s being a correspondent on Lilly Allen’s old BBC show in 2008 (which saw him bizarrely interview David Mitchellin a VERY weird crossover) or perform in several pornographic films, Crocker has been very active in keeping up his image as an internet celebrity.

You will thus not be surprised that Chris has an OnlyFans. Obviously. He’s changed his twitter name to “OnlyFans link in bio” as well as his Instagram bio, so he clearly sees this as the next chapter for his career. I’m going to leave his Twitter here but let me warn you – it is ONE HUNDRED PER CENT NOT SAFE FOR WORK. Seriously, you have been warned, you WILL see Chris Crocker’s penis.

Other than that, he dated controversial YouTuber Jeffree Star from 2005 to 2009, but you probably already knew that if you’ve kept up to date with the YouTube drama.

This was peak entertainment in the early 2010s. How much better could it get than coming home from school and watching some old bloke blitz an iPhone into a million pieces? The funny thing is you actually see these blenders being used in all of the big drinks places. Oh yes, there’s a likeliness that your last Shakeaway was churned to pieces in one of these machines.

Tom Dickson, who is the presenter and founder of BlendTec started the company in 1987, and it’s still going just as strong to this day. On his LinkedIn profile, he claims that he fabricated the first motion sickness patch in 1971.

So, what’s been happening since? Not a lot. Dickson stepped down as CEO of the company quite a while ago, but he’s still sure to be raking in a fair bit of money from the company – their machines are not cheap, retailing for anything up to $1,099.95 for the pro models.

Another video that only went viral because it was the dawn of the internet and anything could go viral back then, Charlie bit my finger is likely the most famous video in internet history. In the video, a boy… gets his finger bitten… by his brother Charlie.

The boys are now broken-voiced teenagers, and they look completely done with being forced into recreating the video from every press run they’ve done since. Just look at the below photo from when they were asked to recreate it as part of a video – you can see the life drained from their eyes after being asked to do it for the thousandth time. 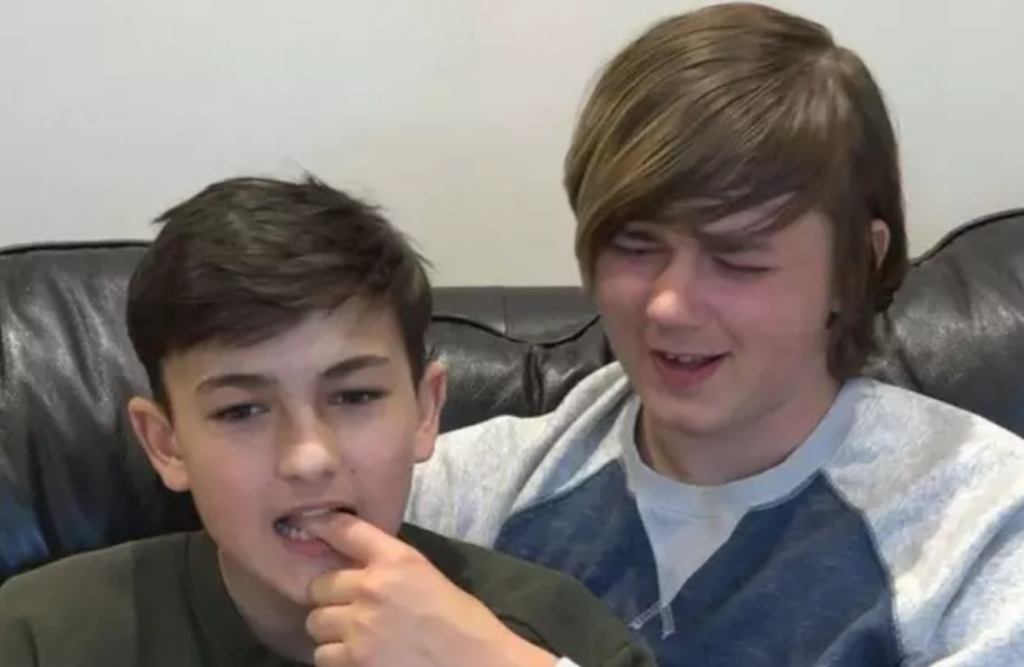 In a recent update video on the channel, we can learn that Charlie has become a Twitch streamer where he plays video games live to an online audience and that they’re going to be making more content surrounding this as well as general other parts of their life. It includes a pretty cringe compilation of gameplay with suitably awful rock type music.

Here’s a really fucking weird fact – when Osama Bin Laden’s laptop was seized, they found Charlie bit my finger on it.

I know we have stupid humour in 2020, but it surely defies any rational thought that someone could build a whole online fanbase of millions of people just by lipsyncing songs on the internet. Having said that, the TikTok was built on similar foundations. Basically, Keenan Cahill started TikTok.

REMINDER: I’ll be playing at @liquidmadison 3/14 come on by

Keenan is 25 years old now (I know) and still makes music to this day, although it doesn’t sound exactly how you’d expect. Don’t get me wrong, it’s not that he shouldn’t have a voice that sounds like this, it’s just hard to imagine. Probably isn’t even him singing bu “Robbie Rosen” instead.

Either way, not bad at all.

Probably the most emblematic of its time on this list is the evolution of dance, a video which shares the same amount of pixels as the number of people that actually enjoyed it. The man in the video is named Judson Laipply, a 44-year-old dancer-turned-motivational speaker.

His website claims that he helps “people and organizations deal with and create change while reminding them about the importance of growth and evolving Judson gives tangible action items and thought-provoking insights into sustained success and joy.” Urrrr okay!

After today’s run shaved off the beard to help with #stoppingthespread been a long time since I’ve been completely clean shaven! Played around with a pencil #oldtimeybankrobber #mustache. #youllgetyoursblackbart

There’s not a lot else to say about ol’ Judson, mainly because nobody is doing anything at the moment and his tweets don’t bang. He is just a normal person.

It was May 2008 when David DeVore was taken to the dentist to have a tooth removed, and it changed the course of internet video history forever. His dad filmed it because his mother wasn’t able to attend, and the rest seems to be history.

David is now all grown up, and you can keep up to date with him via the special Instagram page that his father started to keep fans in the loop.

Here we go! David officially starts his first semester @uf @ufinnovationacademy. Incredibly excited and very proud of him. Can’t wait to see what happens next!

It was announced this year that he’s off to the University of Florida to get his degree.

Me at the zoo

This video is absolutely iconic for one reason – it is the first video to ever be uploaded to the platform. Uploaded by Jawed Karim, one of the three original founding members of YouTube, he awkwardly shuffles around as he tries to think of something to say to do with elephants: “All right, so here we are in front of the, uh, elephants, and the cool thing about these guys is that, is that they have really, really, really long, um, trunks, and that’s, that’s cool, and that’s pretty much all there is to say.”

Google bought the site for $1,650,000,000 in 2006 which, having less stock in the company as the other two, left Jawed with $64 million, which is still obviously an insane amount. Since, he was one of Airbnb’s first investors which probably banked him a fair bit more money.

What’s strange for someone that founded a massive internet site is that he has no active social media other than his YouTube channel. No Instagram, no Facebook. NOTHING. To be fair, if I had millions in the bank I’d just go off and live my life away from anyone else.

Annoying Orange is just… really fucking annoying. A once-respected bastion of comedy on the site soon became tiresome, and people retreated from any Annoying Orange-related content. However, you’ll be saddened and slightly bemused to learn that they’re still making videos almost every single day with the various annoying fruit and vegetable characters.

Judging from the comedy music, massively overcoloured thumbnails of their latest videos and the fact that nobody above the age of 12 has been recommended an Annoying Orange video in years, it would appear that it is now a kids channel (where we know all the big money is made). And, if the like to dislike ratio is anything to go by, it is certainly children watching the videos as they’re remarkably well-received.

HEY! Thank you to all of our fruity fans for 10 Millions Subs on @YouTube!!! pic.twitter.com/AXFgYyuCuL

Social Blade puts annoying Orange’s yearly earnings at anywhere between £100k and £2,000,000, but it would hardly end up being a surprise if the real figure is more than this.

The creator of the series Dane Bodigheimer still voices the annoying little orange prick, and nothing appears to have changed. It’s 2020 Dane, GROW UP.

Hide yo kids, hide yo wife

This was actually quite a dark story in that someone entered the property of his sister and attempted to rape her, but it meant that Antoine Dodson became a full-blown internet celebrity so that’s something? I guess?

Since then we’re all pretty familiar with the fact that he went on to have the interview made into a song which sold thousands of copies on iTunes.

As a homosexual man, in 2013 he announced that he had become a Hebrew Israelite and that he was “no longer into homosexuality”. Then he got a wife and had a child in 2o14. But this brief religious stint didn’t last long, for then in 2018 he identified himself as a bisexual man again.

• What are all of the YouTubers that you adored in your teen years up to now?

• QUIZ: Plan your YouTube career and we’ll tell you which uni you should’ve gone to