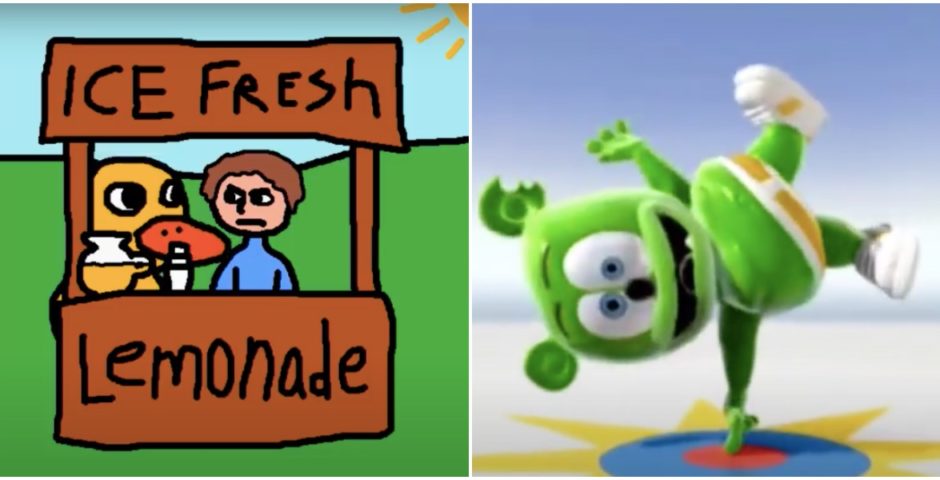 YouTube has been around for 15 years and we have grown up alongside all the crazy, wacky and downright weird content that has been uploaded on the site since 2005. Nothing is weirder than the songs that were uploaded – lyrics could be anything from a duck buying grapes to a Harry Potter themed puppet show.

They would be incredibly annoying and even now, 10 years later, something will trigger a memory you didn’t even know you had and you will spend the day singing gummy bear.

Now songs go viral due to social media but back in 2010 songs spread through word of mouth. Someone in your year would find some weird song on YouTube, by the end of the day the whole school would know and by the end of the week, the whole country. Let’s take a look at the craziest YouTube songs of all time:

Let’s start with a classic. The Duck Song was everywhere, and I mean everywhere back in 2010. People would sing it in science class or at lunch and you would spend your break time hurriedly learning the words so you could join in.

This song has a whopping 441 million views on YouTube and it’s not hard to see why: It’s catchy, has a developed story line and the duck certainly appeals to young children who dedicate their lives to asking adults difficult/annoying questions.

This song is a controversial one: It has over three times as many dislikes as likes (3.7 million dislikes to 1.1 million likes). Rebecca Black faced a LOT of hate over this song but nine years later she is thriving and has spoken out against social media hate and trolling.

The song is undeniably a bop and some of my favourite lyrics are: “Seven a.m., waking up in the morning / Gotta be fresh, gotta go downstairs / Gotta have my bowl, gotta have cereal” and “Tomorrow is Saturday / And Sunday comes afterwards”

This is one of the oldest songs on the list and came out in 2007. It is ingrained in everyone’s mind even though there’s really only one line said in the whole song.

I vividly remember our year four history class searching up this song and singing it instead of doing our work which shows just how important this song was to a bunch of nine year olds.

Like most people, I found this song through the mobile game but I recently found out on TikTok that it was actually part of an Australian campaign encouraging people to be safe around trains?! I swear TikTok teaches me more than I ever learnt at school.

At the end of the day, this song was educational and fun. Maybe these dumb youtube songs actually do have a purpose?

I never actually watched the video for this song when I was younger and I’m honestly disappointed.  It’s just a fuzzy gif of a dancing banana and the lyrics. Maybe that’s a good thing though as it allows you to focus on the quality lyrics of the song itself.

It is 100 per cent a pointless song that talks about peanut butter jelly, asks: “Where he at” and answers: “There he go” and not much else. But it is incredibly catchy and for some reason I could see it working at a rave.

An entire generation knows this song and quite rightly so. I think I actually prefer it to the Harry Potter films themselves. The layers, the puppets and the suspense of: “What actually is that mysterious ticking noise?” gave this song legendary status.

You and your friends would assign parts and practice the song like a professional choir inevitably driving your teachers and parents up the wall. All it takes is for one person to start off with: “Snape… Snape… Severus Snape” and anyone in earshot will instantly join in.

I don’t even know if you could call this a song. The only words in the entire three minutes are: “This is the crazy frog” but if you want to admire some catch electronic music this is the place for you.

The video definitely wins the title for dumbest YouTube music video as an animated blue frog in a flying helmet and goggles flies around some skyscrapers on an imaginary  rocket chased by a robot. Watch it yourself as there is honestly no way to describe the ridiculousness that is this video.

What Does The Fox Say

This song blurs the line between ridiculous YouTube songs and actual pop music because for some godforsaken reason it ended up in the charts meaning we couldn’t actually escape the song. Imagine driving in your car and this comes on the radio – definitely a glitch in the simulation if you ask me.

But perhaps the most annoying part about this song is you had to live with the unanswerable question of what does the fox actually say? Perhaps we’ll never know.

Ah yes, perhaps the most annoying song in the world. I feel like the Baby Shark craze only just happened but it turns out this video is four years old and went viral over two years ago!? I remember it like it was yesterday.

This song was literally everywhere: There were baby shark yoga classes, baby shark dance classes, it was on the radio, on the news and in the charts. There’s even a Baby Shark Nickolodeon tv show and a Baby Shark cereal.

This song 100 per cent wins the title for catchiest YouTube song. I still catch myself singing it on a regular basis even though I haven’t heard the song in months.

There is literally no point to this song. The only lyrics are the words badger, mushroom and snake and I would barely even call it singing. I honestly want to speak to whoever wrote this song and find out what badgers, mushrooms and snakes have in common.

My only issue with this song is it sounds like a countdown to something going wrong and is very intense. I do like the dancing badgers though.

I just watched this video several times and I still have no idea what’s going on which makes it the perfect YouTube song. No plot, a weird video and even weirder lyrics.

It starts off about a muffin who wants to die and then someone kills a potato? Then there’s a dad joke, someone has an affair and the sun blinds someone else. Then someone films a movie and someone’s pregnant? There’s a cow, a cactus and a llama learning how to drive? Someone please explain.

• Which iconic 00s girl are you? Take this quiz to truly find out

• Okay, but what’s the best Horrible Histories song of all time? A considered ranking