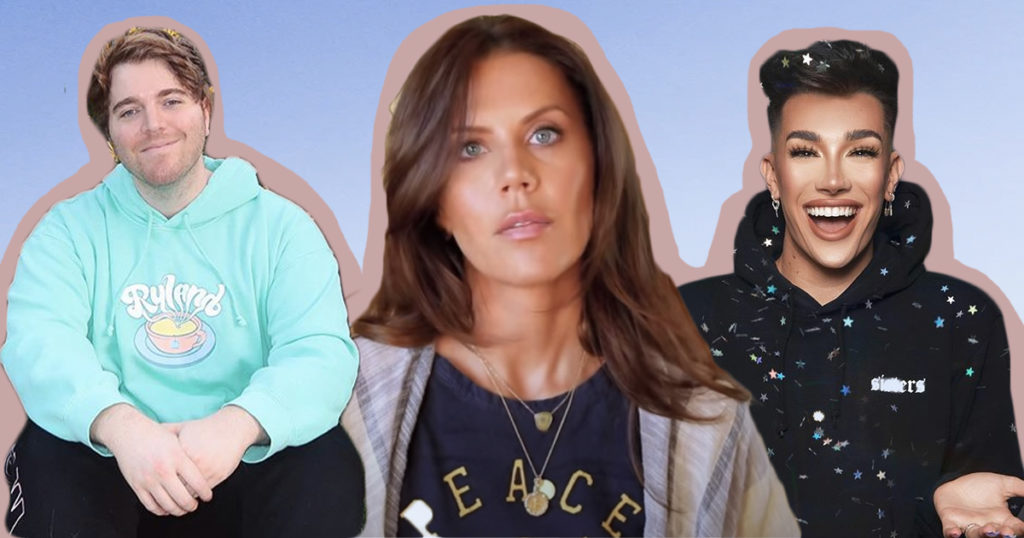 This is one big ol’ mess

Tati Westbrook has spoken out about the James Charles drama one year on and it’s blown up all over again. She released a 40 minute video yesterday, claiming that the “Bye Sister” video that started it all was only made because of lies and manipulation she experienced at the hands of Shane Dawson and Jeffree Star. Since the video was released last night Shane Dawson’s YouTube channels have since been demonetised and he’s already on track to lose a million subscribers.

“What?”, you say. “When did Shane Dawson get involved in the Tati and James beef?” Don’t worry. Walk with me and I can lead you through this tangled web, into YouTube beef clarity. Here is the Tati James Shane drama explained. Oh and Jeffree, because when isn’t he involved?

A reminder of how it all began

In May last year we were rocked by the Tati Westbrook x James Charles eyeshadow palette – sorry, force of habit – I mean YouTube drama. It played out in a series of videos where Tati denounced her friendship with James, seemingly over a fall out to do with promoting hair gummies. James apologised, but things unravelled and James was accused of grooming straight men. Jeffree Star waded in and, in a since deleted tweet, called James a predator. James Charles’ followers haemorrhaged and he lost over a million subscribers in one day and over two million within a week. It was the biggest YouTube beef in the history of YouTube beef.

Then it all died down, James Charles’ apology was accepted by the Youtube community after he dredged up receipts and explained himself fully. Tati also apologised and everything was calm. Until now.

What does Tati Westbrook say in her new YouTube video?

In her new 40 minute video, Tati claims she was “manipulated” into making the original “Bye Sister” video by Jeffree Star and Shane Dawson, who she had become close with. They all became friends after Shane made his original documentary series on Jeffree’s life, which made Tati think Jeffree was capable of change despite his maaaany past controversies and dramas.

Since becoming friends, Jeffree spent a lot of time speaking to Tati about James Charles. By 2019 he seemed to be straight up obssessed with him, with Tati claiming: “Back in 2019, Jeffree started talking a lot more crap about James Charles than usual. It seemed that doing so had become his biggest obsession. It started with him telling me right before filming our collab together for James Charles’s channel that James Charles actually didn’t want me there, that he had wanted NikkieTutorials instead, but he said he’d had my back.

This is where Shane Dawson gets involved

Eventually Jeffree introduced Tati to Shane, who came over to her house. Tati claims they had a heartfelt conversation and she shared that she was a victim of sexual assault. In the new video she says: “I shared that I had been the victim of sexual assault. I spoke about my faith and told him how deeply I feel for others. He shared with me that he was an empath and that he could feel all of my pain.”

Then Tati alleges Shane started digging dirt on James Charles too. Tati says in her video: “Shane said James Charles was a monster and that James was hurting minors.

“I was told there were a lot of victims that were going to come forward to destroy [James]. I should have known better to fall for their lies and manipulation. I allowed Shane and Jeffree to drive a wedge between our friendship.”

Tati then alleges that Shane was heavily involved in the production of the Bye Sister video, saying: “Shane did not just know about my ‘Bye Sister’ video. He offered to help edit it, he even offered to design the thumbnail and help title it.” Both Shane and Jeffree have since denied involvement in this video.

Tati says she has gathered a lot of evidence of Shane and Jeffree’s involvement in the video, but can’t share it due to the advice of her attorney. She says: “However, there will soon come a day where we will be able to present this evidence and you’ll be able to see why it is that we believe Jeffree and Shane are responsible for so much of the damage that has been cost.” So the Tati James Shane drama may not be over after all, if Kween Tati one day gifts us with some receipts. Maybe they’re planning on dredging this up once a year every year until we’re all old and decrepit.

Two weeks ago, before the new Tati video was released and the Tati James Shane drama was given life, there were already suggestions that Shane was involved in the Bye Sister video. In response to this allegations Shane posted a response via the much loved medium of iPhone notes app screenshots. In the since deleted screenshots, he says he knew Tati was making a video but did not tell her to make a video. He denies all involvement in the making of Bye Sister and claims he has never tried to ruin a career or “make someone look bad” in all his 15 years on YouTube. He does, however, say that James was a “young egocentric power hungry guru” who “deserved a slice of humble pie the size of the Empire State building”.

For everyone who hasn't gotten the chance to read what Shane Dawson said before he deleted it. He wants to be all shady but can't stand when people treat him like how he knew James Charles was being treated. So there's that. pic.twitter.com/7FrM99fluD

But this was before the Tati’s video came out. Since the video was released he went wild on an Instagram live, saying “Oh my God, okay, I’m live because I can’t even process – I need a drink of water – I can’t process this, this is insane. This is insane! This woman is – oh my God, oh my God.” He screams “You are so manipulative!” at the screen and accuses Tati of fake crying.

Jeffree Star has not commented publicly since the new Tati video was released.

James and Tati are all good now, apparently

On a slightly more positive note, James and Tati have made up since the drama and all is well with them. Speaking about James in the video, Tati says: “We compared DMs, texts, and stories of what happened behind the scenes. We apologised to each other, forgave each other, and agreed to wait patiently until it was right for me to share my story.” She explains that she has apologised privately, but made this new video so she could apologise in public.

For the full Tati video, if you have a spare 40 mins, watch below: