Season two Islander Scott Thomas is making his own reality TV show which will rival the show which made him famous, Love Island. The new series, Parties in Paradise, is currently looking for applicants.

Parties In Paradise will include young people sailing around on a luxury yacht to some of the world’s top party destinations, where they will also potentially find love.

Scott reshared an Instagram story from his company, The Social PR, which said it is currently casting for the show. The post read: “Would you like the change to spend a summer at the most exclusive beach parties full of the world’s hottest singles? Come aboard for the greatest summer of your life for this new reality dating show.” 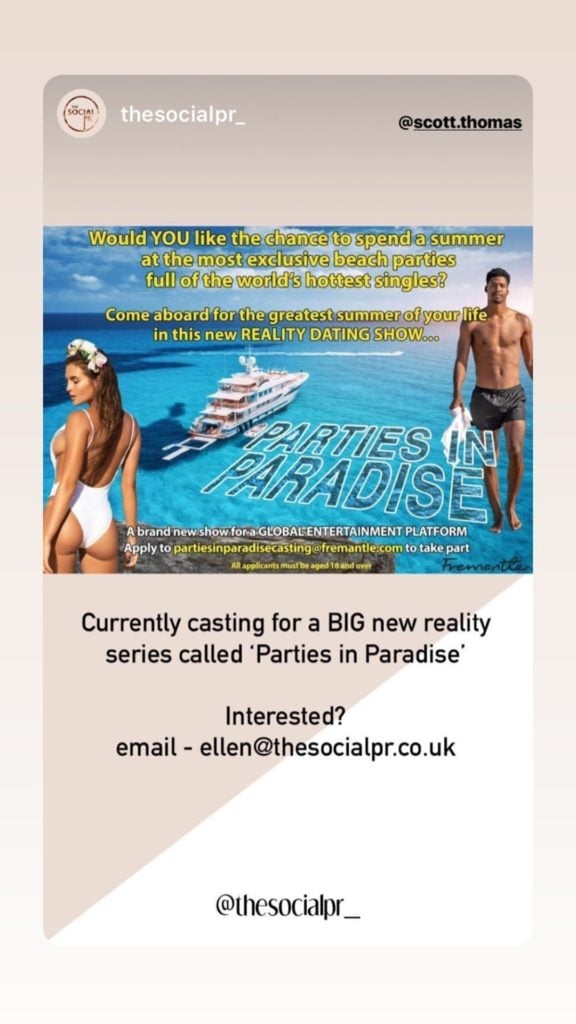 An insider told The Sun Online more about the upcoming show. They said: “It’s in the middle of a bidding war between channels but it’ll end up airing globally – it’s huge. It’s filming in October and November and the idea is that sexy single people cruise around on a yacht and fall in love.

“The boat will go between islands and they’re looking for people who aren’t famous – they want normal people who’ll win the public’s hearts, just like on Love Island. They haven’t confirmed a presenter or when it’s due to air, but it’ll be going head to head with Love Island when it’s on.”

If it’s going to be released globally it could be picked up by a company like Netflix. Parties In Paradise is being made by Fremantle, the production company which created Netflix’s Too Hot To Handle.