The show holds a mirror up to men’s bad behaviour, instead of letting ‘boys be boys’

One of the main things you question while watching Too Hot To Handle is “where do they even find these people?”. Dripping with sexual frustration, completely unconcerned with how they come across being openly, desperately horny on TV and filled with obscene levels of self confidence. It’s no surprise, then, that the men in both Love Island and Too Hot To Handle are absolutely FULL of crippling toxic masculinity. They exude it. Harry and Kelz’ bust up is the prime example of this, with both boys puffing up their chests so much you can just about forget that the argument is over a pretty girl not fancying them. Like if you cry every time.

In Love Island, we would see this fight play out without much resolution. Think of the iconic “gigantic bellend” moment between Jonny and Theo. The boys in Love Island tend to be better bonded, as a result of the longer time span of the show, but they rarely explore their emotional shortcomings and deep seated issues. The premise of Too Hot To Handle means that this is literally impossible to avoid. In order to form real, lasting commitments, the boys have to address these issues instead of mindlessly grafting different girls for four weeks, waiting to find one that wants to shag him as much as he wants to shag her.

There are many things Too Hot To Handle got right when it came to approaching toxic masculinity, whereas Love Island and shows of its calibre tend to skirt around the issue, or use it for entertainment value. Here’s every time our hearts were absolutely touched by the emotional progress of a bunch of naughty little possums: 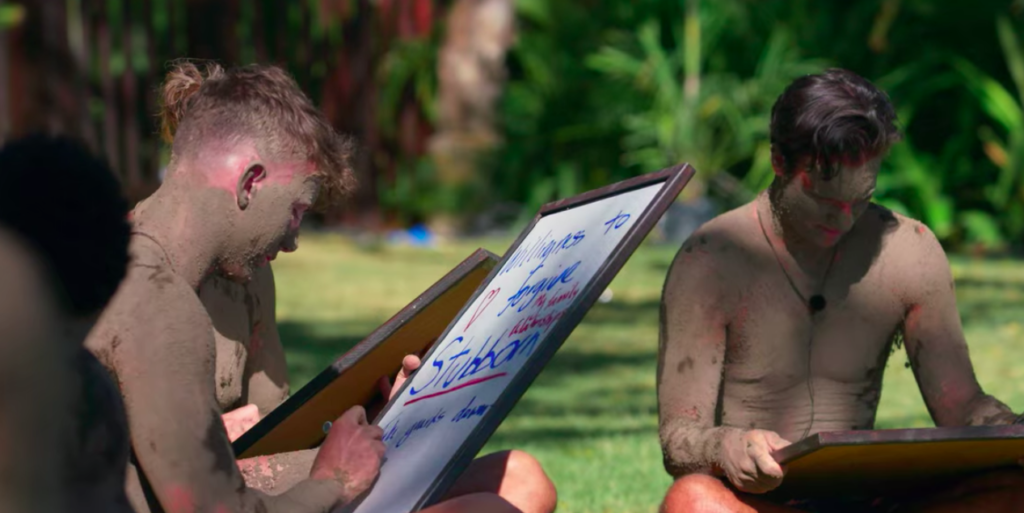 This was enough to make anyone well up. After the mud workshop, the boys are told to write down “what has been holding them back” and illustrate these feelings as best they can. They weren’t exactly works of art, but they made you adore each boy so much more – and redeemed the ones you were starting to hate. It also meant that the macho boy-drama going on between Harry and Kelz was quelled, with Kelz saying “he’s not the puppy anymore, he’s like a brother to me”. Can you spell P-R-O-G-R-E-S-S? It’s so satisfying to watch, I’d proudly hang any of those drawings on my fridge.

In comparison, Love Island very rarely rectifies any fallouts on the show, but rather plays them out for more drama. This can occasionally mean that watching the show makes you feel like a bit of a bad person, cheering on fights and watching people get hurt on screen. Too Hot To Handle proves this isn’t what it takes to make good TV, and really we’d all happily settle for a bunch of 25-year-old topless men doing emotional drawing on the beach and bonding.

(I am purposefully choosing to ignore the final step of the challenge where they attack their fears with sticks in order to feel masculine again. Could have just left it at the hugs. But no TV show is perfect, I guess.) 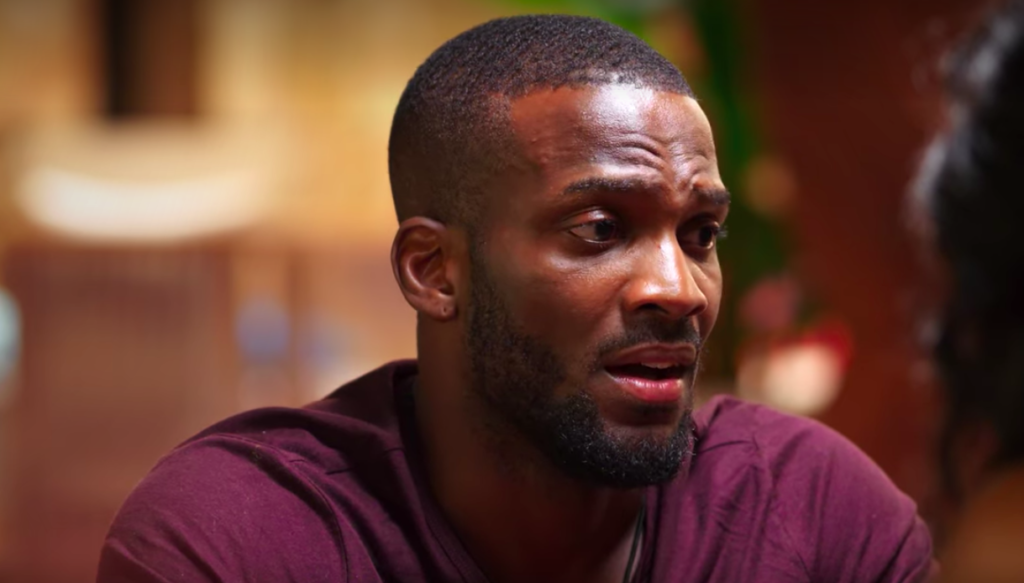 Good things come to men who feel. At the start of the show, Sharron did not deserve Rhonda. He had acknowledged his feelings towards her and told her he had walls up, but when she asked him to open up and bring down the walls, he said – point blank – no. This was jarring to watch, and wouldn’t have even happened in LI, because a deeper connection isn’t required unless you’re gunning for a place in the final. Never in Love Island have we seen something so bare and honest from a male contestant as Sharron refusing to open up to Rhonda – even if it wasn’t a positive interaction at the time. But the premise of Too Hot To Handle meant that if he wanted anything with Rhonda, he had to tackle his emotional issues in order to get her back. It’s not exactly therapy (which honestly all of these boys need) but it’ll do.

David set an example to the boys, and was the most beloved as a result 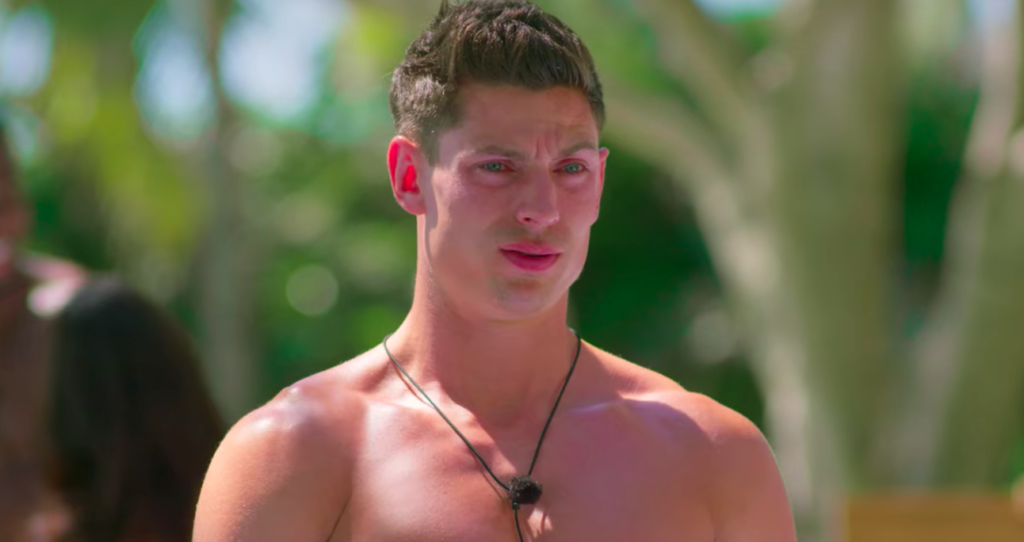 David was consistently the kindest, most open and loving boy on the show. When he cried in that challenge, the nation cried. Seeing David take a step back from Rhonda for Sharron was physically painful at the time but he knew it was for the best. David was friends with every single person in the retreat – he could maybe even tolerate Haley for a bit if you made him. It was refreshing to see the most emotional man in the series become the most beloved, and to watch as all of the other boys strived to be the Weeping Legend that he is. Whereas, on the flip side, I don’t know if I can genuinely name a time that a boy in Love Island has cried? Isn’t that mad. The girls cry at least once a week, but not a tear shed from any of the boys. It’s looking like even more people can learn from a certain weepy retreat resident than just his fellow contestants. Let’s all have a blub at 8pm tonight for my man David, guys. 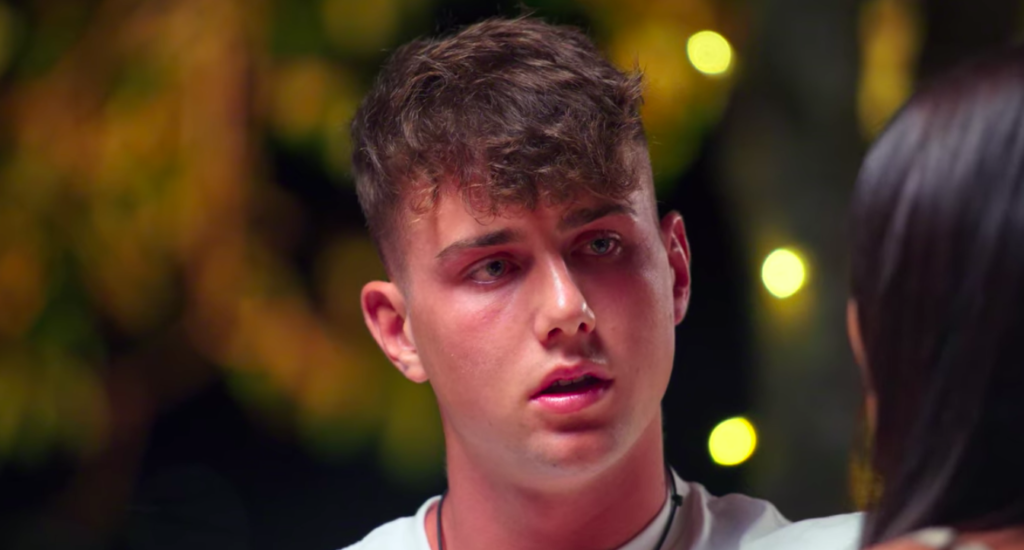 This boy!!! This. Boy. Following him through this show was like a rollercoaster of emotions and my God, was he frustrating to observe at times. Sheer, young, unadulterated toxic masculinity in its purest form. He lied about kissing Francesca, got into fights with Kelz and stormed off like an angry toddler when everyone got angry at him for losing money. But he genuinely made the most progress out of every contestant, and went from lying about breaking the rules to saying he wanted to stop breaking rules within four episodes. Granted, he then went and broke the rules again – but he came clean, told everyone and was mature about it. He’s not a puppy anymore, for sure.

And it wasn’t just the boys that made emotional strides 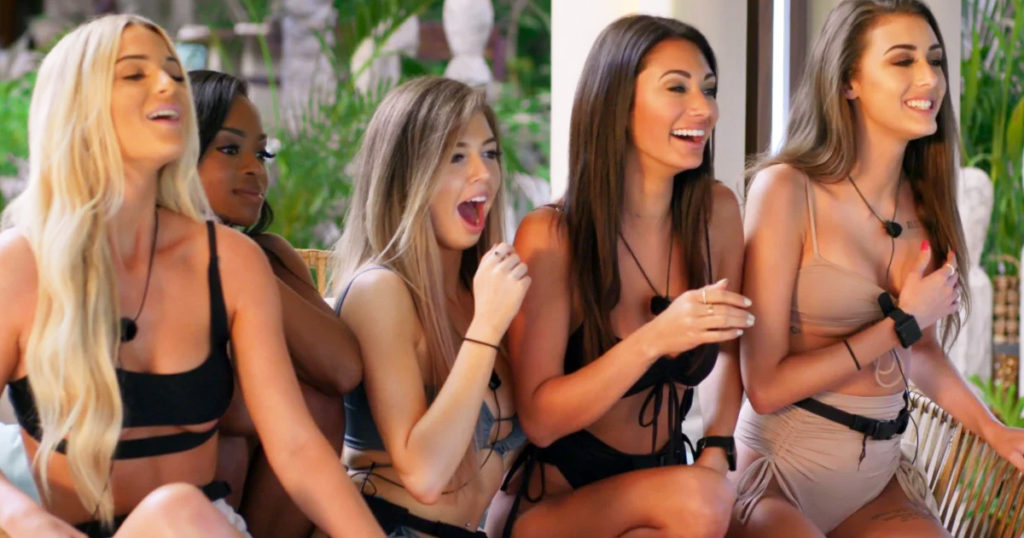 To be fair, this show wasn’t just good for the boys. The girls were also forced to see themselves in another light, and look for deeper connections with men instead of just sex. As Chloe famously said “usually I would have just shagged him a few times then binned him off by now”. Or was it Aristotle that said that? I forget.

They also had their own “yoni” workshop and as much as I absolutely hate the word yoni, it was good shit. They learned to accept and appreciate their bodies as they are, and were forced to bond. Love Island usually relies on this bonding to happen naturally, and if it does not, girls are dismissed as not being a “girls girl” and that’s the end of that. Too Hot To Handle doesn’t leave any room for negativity – they literally kicked Haley out because they didn’t see any sign of positivity or progress being made. You really can’t knock a show that’s trying to make it’s contestants into better people and, for the most part, succeeds in doing so. 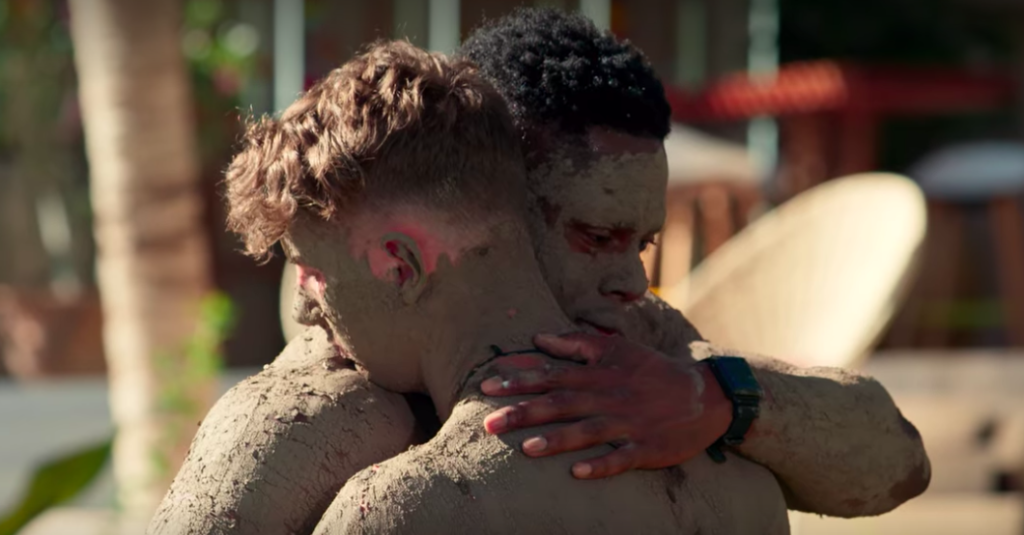 This is exactly what men need to be seeing on TV at the moment. Male mental health is spoken about in abstract quite a lot, and it’s widely acknowledged that it’s a “problem” without much discussion taking place on how to deal with it. Without men having any actual role models or examples of how to handle complex and difficult emotions, the situation will never get better. I’m not saying they’re perfect feminists, but at least they’re learning.

Too Hot To Handle subtly, on the side of all the jokes about sex and erect penises, manages to handle (sorry, I had to) this issue realistically, and with sensitivity. It opens men up and shows how much more likeable they are when emotions are exposed, and when they’re actively choosing to work on themselves. That’s more than could be said for most reality TV, and hopefully we see more of it in the future.

• Quiz: Which girl from Netflix’s Too Hot To Handle are you?