Over 130 Bristol students are going on a rent strike and demanding their rental company releases them from their tenancies.

The students are withholding quarterly rent payments of up to £1500 each, due on the 1st April to Digs, one of Bristol’s main student letting companies.

After their demands of cancelling rent payments from April were not met, the group see this as a last resort. Third year medic Josie Rahman says: “If this is the only way they’ll listen to us, we don’t really have another option.”

The strike was kickstarted by an email from Digs last Thursday – a “polite reminder” that the students would still be expected to pay rent regardless of the situation.

“This payment is due regardless of when your student loans come in and the current situation with Covid-19,” Digs wrote.

“We are expecting full rent to be paid in line with your tenancy agreement. If you are experiencing financial hardship because of Covid-19 then you will need to provide proof of this.”

The “polite reminder” ended by saying: “Failure to make a payment by the date due will result in additional charges.”

Digs have since admitted this email was “insensitive” and claim it was sent in error. However, it was the catalyst for the students to organise. Third year Ruth Day says: “They’re just treating it as normal, like nothing’s changed.”

Like many students, she’s found herself in a precarious financial situation. “When I pay this, I’m going to have £10 left in my overdraft,” Ruth told The Tab. Even Digs’ offer to discuss financial hardship landed badly for the strikers. “A lot of people won’t want Digs to go through their personal finances,” says Ruth. 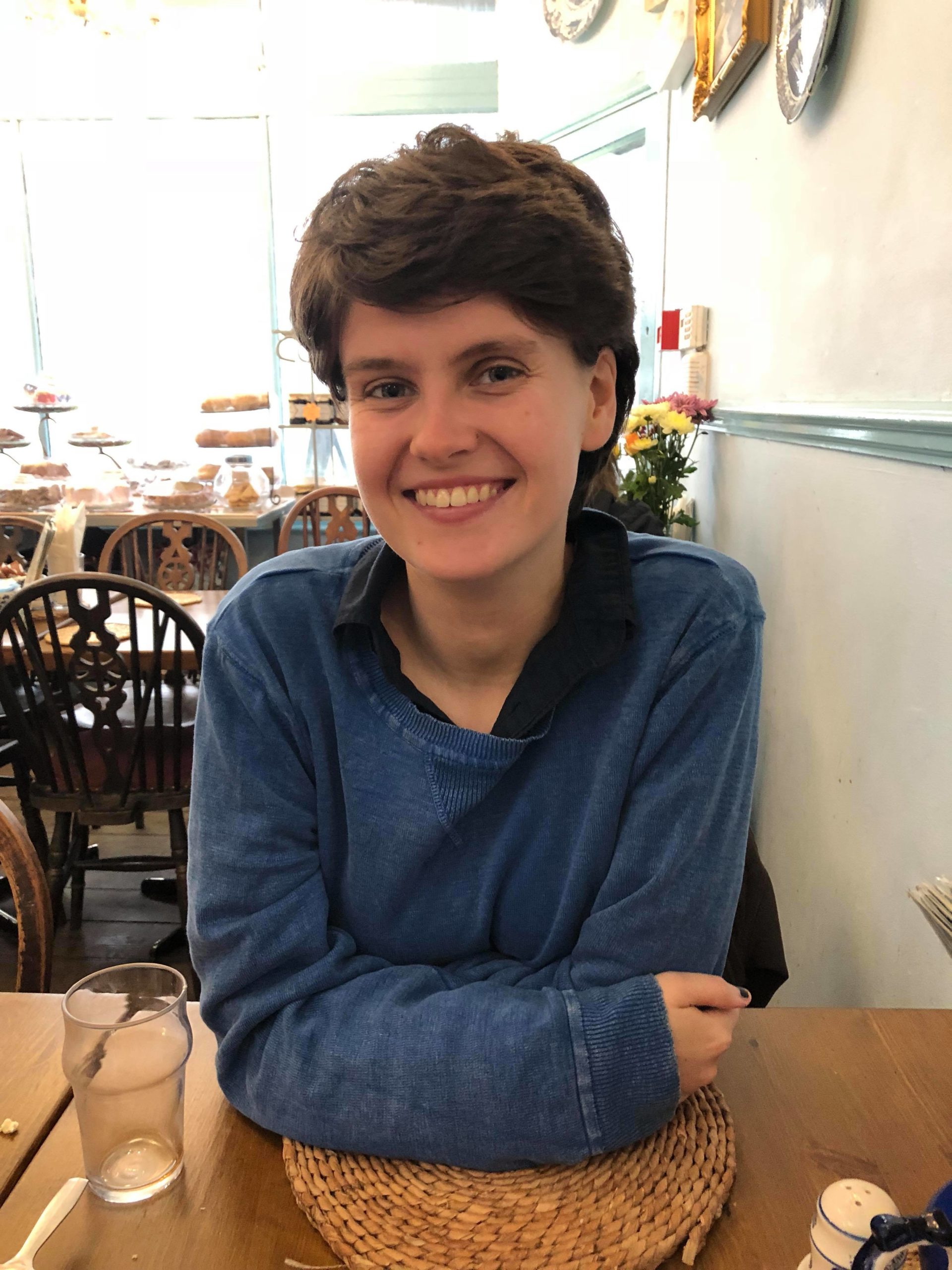 “They didn’t even say what financial proof they required,” says Ruth. “Because of the situation, people shouldn’t have to prove they’re struggling.”

Digs’ email stood in contrast to another large student letting company in Bristol – Penlane Ltd – offering all tenants a 50 per cent rent reduction.

Since last week, several rental companies have agreed rent reductions or contract cancellations for students. However, the approach is inconsistent across the sector, with many companies students rent from not owning the properties they collect fees for. In those cases, students have often found themselves victims of chance – some students renting from a company have been allowed out of their contracts, whilst others renting from the same company are being held to their rent payments.

In an initial email to Digs, the rent strikers explained their circumstances, saying some had lost jobs, and that they “feel that it is grossly unfair for us to be paying a quarter’s worth of rent for a property that we will not be living in.”

They demanded that Digs “cancel the final rental payment due on 1st April and agree that tenants do not have to pay it at a later date,” and “not penalise anyone legally or financially who is taking part in this action. This includes not charging anyone late fees for not paying their rent.”

The strikers added: “We will rent strike from Wednesday until you act on our demands and you cancel the final rental payment. Of course though, we are very up for negotiating. ”

The email ended by saying: “One last thing. Please don’t assume that we are just a bunch of ignorant students. Some of us have been involved in rent striking before. We know our rights and we know what rent strikes can achieve. Throughout this process, we will be in contact with ACORN and other groups/networks. We would very much appreciate you not sending out threatening emails.” 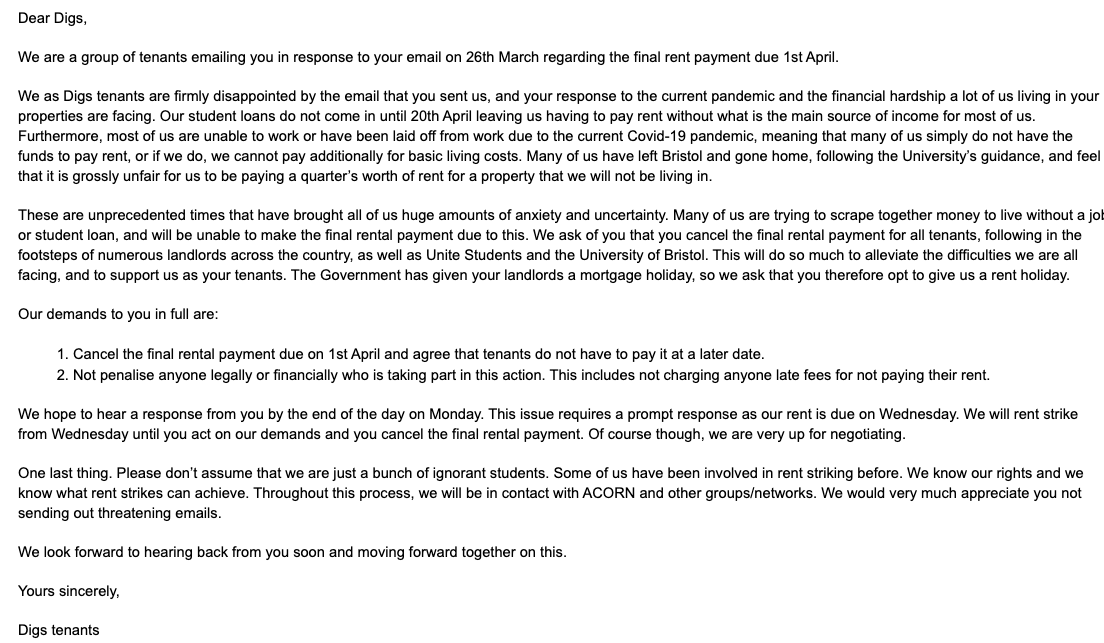 Digs replied on Monday (3oth March) explaining they were just an agency, and said they’d discuss the student loan issue with individual tenants. However, the email was firm in saying “the legalities are such that the tenancies are still valid and hence the rents do have to be paid.”

Josie Rahman, a fourth year medic, told The Tab: “We haven’t actually ever been contacted or informed about who our landlord is or been given a number, let alone emergency number, for our landlord.

“So it’s impossible for us to negotiate that with the landlord directly.” 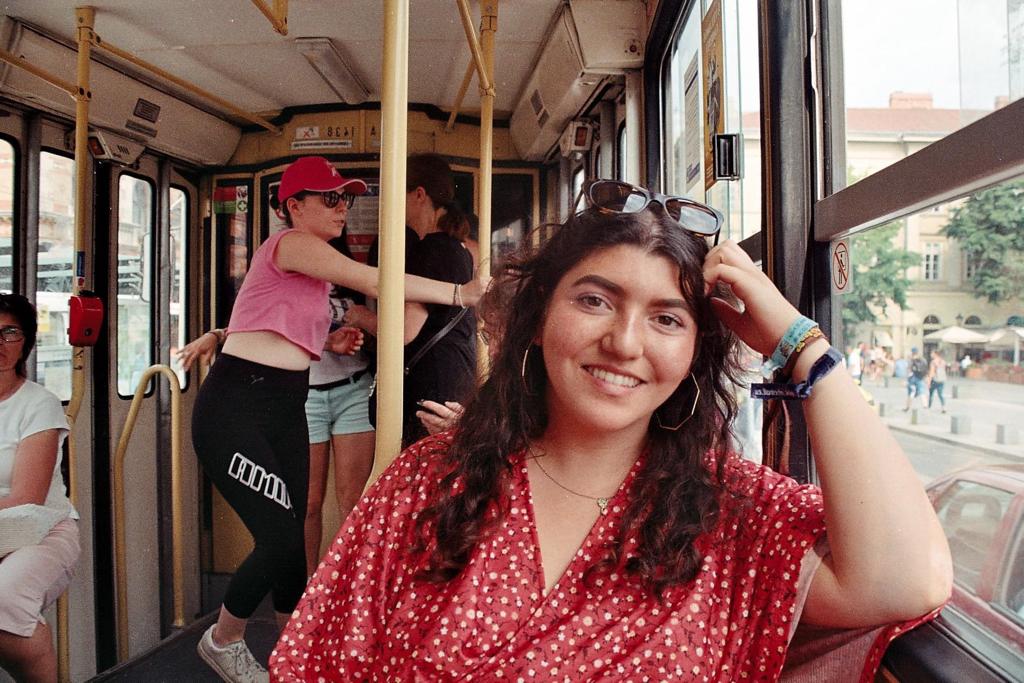 Unimpressed, the strikers emailed back to say: “For many of us this has now become a situation of ‘can’t pay, won’t pay’.”

The strikers say they did not hear back from Digs after that email, and so withheld rent on the due date – April 1st.

“We’re just practicing our rights as tenants and just demanding the service that we’re paying quite a lot of money for,” Josie told The Tab.

“If this is the only way they’ll listen to us, we don’t really have another option.

“I feel like our demands are fairly reasonable, and I am quite confident and hopeful that we’ve got the power in numbers to actually be listened to.”

Ruth is also confident that the strike will pay off: “A lot of landlords think the students can just be pushed around because we don’t know our rights.

“Once the money is withheld, Digs and their landlords will realise they’re not getting any rent and I hope they’ll start chatting to us more.

“The ball is in Digs’ court – they can act to try and resolve the situation or they can do nothing and the right won’t get paid.”

In a response to The Tab, Digs said they would be putting an option of zero rent for vacant properties, and half rent for occupied properties, forward to landlords.

Digs spokesman Steve Harris told The Tab: “We act for in excess of 100 landlords so we can’t give a blanket amendment to rent.

“We are certainly trying to take a personal, sensitive and careful approach towards tenants but each landlord has a completely different opinion. We will be contacting landlords on behalf of tenants.

“We will be talking to landlords over the next few days, none are unaware of the issues. The SU have issued an option which looks to be from ‘everyone’ suggesting zero rent if property vacated and 50 per cent rent if tenants in the property. We’ll certainly be putting this forward to landlords.

“During this National crisis we are doing all that we can to help. For example, the owners of Digs have donated an apartment by the hospital for the NHS to use and a number of our staff are volunteering to support the vulnerable.

“We also have some staff who are married to key workers where we are being as flexible as possible to ensure they are well looked after. And of course we are trying, like everyone else, to survive this difficult period of time.

How has lockdown affected you? Take our short survey and let us know: